Navigating tough times and rough waters: All of us have done a lot of that over the last two years, and it’s something just about every alliance manager is called on to do at some point in the life cycle of the partnerships they manage.

Award-winning public speaker Mark Denton has steered through stormy seas both literally and figuratively, both in his first career as a sailor and in his current vocation as a leadership expert who has worked with some of the world’s most well-known organizations, including Coca-Cola, BMW, IBM, Barclays, HSBC, and Fujitsu, among many others, to help “reshape their cultures and improve their leadership and team resilience,” in his words.

In a lifetime in which he has sailed 80,000 miles of ocean, contributed heavily to the Henley Business School’s management textbook Inspiring Leadership: Staying Afloat in Turbulent Times, and helped land two organizations on the Sunday Times Top 100 Best Companies to Work For list, Denton has learned that success is achieved when teams are concurrently “safe, happy, and fast,” a notion he will delve deeper into during his 2022 ASAP Global Alliance Summit presentation “Navigate the Storm: How to Get Ordinary People to Achieve the Extraordinary When the Only Way Out Is Through.”

Safe at Any Speed?

It’s an understatement to say that it’s challenging to achieve, maintain, and harness safety, high morale, and blazing speed—all at the same time.

“Easy to say individually, hard to achieve collectively, primarily as they can seem at odds with one another,” Denton has said. “And whenever any one of them was missing, performance suffered, further validating their unique combined power.”

In a culture where many believe in “trial by fire” and that “anything that doesn’t kill you makes you stronger,” safety rarely shows up on lists of qualities describing high-performing teams. However, in Denton’s view, insecurity—the opposite of safety—is more often than not counterproductive to innovation.

“If anyone is threatened, then our focus is on protecting ourselves rather than taking the calculated risks necessary to advance ourselves and our cause,” he wrote. “Feeling safe is an innate human prerequisite which has literally allowed us to evolve as a species, and our whole bodies are designed to seek this on three fronts: physically, emotionally, and psychologically. Only when we feel safe within these can we thrive.”

Denton’s view on the role of happiness in the workplace adheres much closer to common wisdom. He acknowledges that “happy people and teams are more productive, have more staying power, are more compassionate, and are easier to work with and within.”

Organizations only see this in action when their workplace cultures foster several elements, according to Denton.

“Feeling included and valued…Being motivated by our work, its purpose, and its rewards. Having the opportunity to be stretched, give our all, realize our dreams, and be the best that we can be.”

However, even the most secure and inspired teams won’t succeed in our corporate climate if they can’t outpace Babar. Again, Denton has found many parallels between boardrooms and racing yachts.

Both must be “fast in terms of a clear focus on the destination to ensure the straightest course. Fast in terms of efficiency of the operation, in order to optimize the result. Fast in terms of agility, to rapidly innovate and change when challenges demand the need,” he wrote. “Slow boats never win, not on the ocean and never in business, a fact that has been further magnified by the highly competitive, constantly changing, volatile world of today where speed and agility is everything.”

Register today for the 2022 ASAP Global Alliance Summit to hear Denton expound on the wonders that ensue and the benefits that accrue when leaders instill these three traits in their teams. 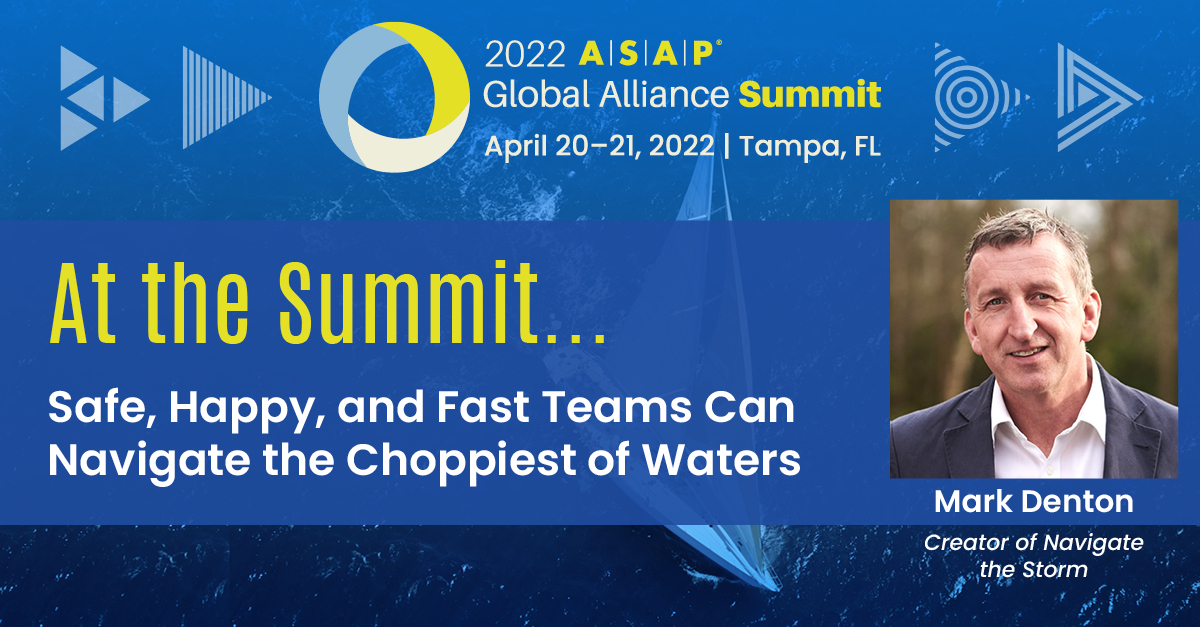 In Search of Excellence: An Alliance Management Top FiveMarch 23, 2022 Finding the Thread: Go-to-Market Partnering Strategies for a Disrupted, Digital WorldMarch 23, 2022