Many alliance managers report that they have had to be the ones to deliver the bad news of impending change. When you do it right, however, it helps your alliance by bringing down the tension in situations where there’s great anxiety about changes that are afoot.

In other words, you may get blamed—but with a good result.

That was one of a number of insights that emerged from a recent ASAP Roundtable, “Don’t Shoot the Messenger!: Alliance Professionals as Change Managers and Megaphones,” which took place on May 17. The well-attended roundtable’s three breakout rooms were captained by Neil Blecherman, technology alliances and partner program director at Nutanix; Lena Frank, vice president of program management at Eisai; and Mike McBride, vice president of partner relations at Upsher-Smith Laboratories.

Given all the change occurring in every industry, it’s not a surprise that it causes so much angst and agony—nor should it be a shock that alliance professionals are often the ones charged with delivering what’s seen as unwelcome information, interpreting and explaining decisions that have been handed down from on high, or otherwise attempting to make the unpalatable go down as smoothly as a fine single-malt scotch.

One roundtable participant summed up the whole topic pretty neatly: “It’s not easy to deliver hard messages.” Another stressed that when alliance managers are put in the middle of fast-changing developments, the best policy is “being honest without getting people nervous.”

Definitely not an easy thing to do, and yet another illustration of the fact that these so-called “soft skills” alliance managers tend to excel at are anything but soft. In fact, they can be really hard!

So how to keep your head and keep your stakeholders and partners from losing theirs? A few pro tips:

Read the Room—and Prepare to Take the Heat

This work of change management and communication flows both internally and externally, and can be made more complicated by both remote work situations and global alliances that reach across cultures. In the latter case, written communications often work better than verbal ones, as long as they convey messages clearly and without coming off as rude, abrupt, or otherwise offending cultural sensitivities. One participant who works with companies based in Asia recommended “understanding the environment,” “reading the room” (especially when that “room” is virtual), and honing one’s ability to step out of a US-centric point of view to better see things from a partner’s perspective.

Another alliance leader urged participants to start by identifying problematic issues within their own organizations. “Be the person who steps up and says we need to revisit certain things,” she said, before admitting, “These have been some of the most difficult conversations I’ve had. They’re not always well received.”

Then again, as another participant noted, sometimes as an alliance manager you have to stick your neck out and be the messenger of change. You may not get thanked for it—at least not immediately—but it can take the temperature down on a hot situation and cool passions while people adjust to what’s coming.

In just under an hour, this roundtable featured more great tips and pieces of advice on change management than there’s space for here. But they included: 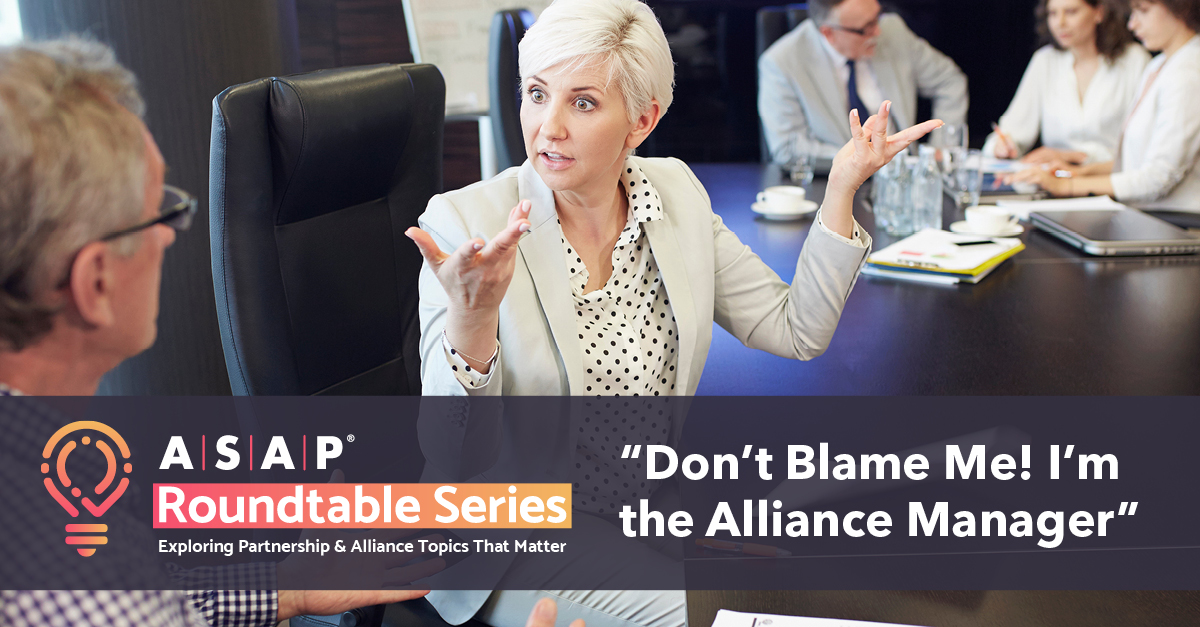