In the third and final session of the second day of the 2020 ASAP BioPharma Conference, medtech took center stage. Derek Danois, chief data officer at GE Healthcare, outlined his company’s nascent efforts to transform basic healthcare delivery models in his presentation “Artificial Intelligence in Clinical Care Delivery and the Opportunities to Accelerate Your Development and Commercial Strategy.”

Artificial Intelligence (AI) is one of the principal tools at the heart of a larger movement in the healthcare industry around “precision health.” The concept is simple: Rather than prescribing medications based on a set of generic symptoms, doctors will integrate lots of relevant data, such as genetic profile, family history, and environmental factors, in designing a custom treatment plan. Precision health will be built on precision diagnostics, therapeutics, and monitoring (e.g., wearables).

Data: the Source Code for AI and the Key to Early Detection

With the overarching mission of precision health explained, Danois showed the audience a video that told a story set in the future where a woman detects a lump on her breast, sends the self-exam directly to her doctor right from her bathroom, gets scheduled for a consult immediately, and is put through a battery of tests at the healthcare facility while doctors and technicians analyze the resultant data. The verdict: they caught a malignancy early enough to expect a full recovery.

The video is meant to inspire, said Danois, but it also conveys GE Healthcare’s vision for the future.

“What can we do to intervene now in helping to spot the early signs of diseases? How can we intervene in a little bit more of an effective manner? How do we help patients feel less fearful and engage more with their clinicians?” he said. “We’ve got to start thinking even earlier. We have to start thinking about the data that is being collected around the world that allows us to think about this journey. Data truly is the source code for AI.”

AI, Danois explained, has to be educated, taught, and trained over a long period of time in order to be effective. For example, an AI program must be exposed to a trusted radiologist’s annotation of a tumor on an x-ray over and over again before it can learn to recognize a similar tumor on its own and become a “true companion source” and a reliable second opinion for doctors.

The technological piece is one challenge. There are also regulatory, economic, and administrative obstacles to contend with. Healthcare providers are generating loads of valuable data, but this information is fragmented around the world, making it difficult to get the right data in the hands of clinicians at the right time. Moreover, hospitals still aren’t convinced that the cost-benefit ratio is in their favor yet. They still haven’t seen enough evidence of positive long-term outcomes, plus there’s a question as to whether health insurance plans will reimburse for AI-based treatments. Even if a health provider is sold on a new concept, it is difficult to deploy it in a highly regulated industry like healthcare.

Still, despite the hurdles that still need to be cleared, nobody disputes that the payoff is going to be transformative, to say the least, down the road in terms of fluid and effective healthcare delivery. Danois likened where we are today in digital health to the first iPhone more than a decade ago. Back then, there were only a few apps, but everyone saw tremendous possibilities. Now, we perform many of our day-to-day functions on our phones. Healthcare can get to the same place, in Danois’s view.

“It starts with understanding and thinking about the various data content that exists in these organizations. How can those be made available for, not just research but practical product development, AI development, collaboration with industry partners,” he said. “Thinking about how those can be turned into AI applications that can be deployed in the right workflows, what challenges exist from a security and privacy perspective? And then thinking about how those get injected into intelligent applications that can be deployed either on the devices in hospitals right now, or they can be deployed in a hybrid model using cloud infrastructure.”

Ultimately, said Danois, we need to get to a point where doctors don’t even think about the technology behind AI-powered apps and devices, where all it takes is a simple Internet connection in order to take advantage of them.

Alliances, of course, are a must if we are going to get there. GE Healthcare realized early that it couldn’t do it alone, despite the great investment it made into AI technology, software engineering, and data science. (For more details about GE Healthcare’s Edison AI platform, see “It’s the Data—and a Lot More,” Strategic Alliance Quarterly, Q1 2020.)

“We needed to open our technology. We needed to create an ecosystem. We needed to create the landing platforms for other partners to work with us. We’ve been encouraging others to think about doing similar things,” he said. “When you can have ethically compliant ecosystems, when you can think about what each party brings to that challenge and help solve it, and that there’s a known entity at the end of that workflow stream, either in the provider or the patient, that will allow us to take advantage of these tools and technologies and leverage these delivery models, we know that we can achieve amazing precision outcomes.”

The FDA’s Position on AI in Healthcare Devices

With that, Danois fielded a few questions from the audience. The first dealt with privacy and security concerns that come with AI apps and devices. Danois explained that these apps are like any digital health technology in that they are designed “in a thoughtful way” to do a task.

“These get deployed into an already-existing, highly regulated environment for medical devices, whether it is in the US, in Europe, or for most other countries around the world. There’s some regulatory process where these devices need to be approved from a technology point of view, both physical and digital hardware. Those AI applications will exist in those environments,” he said, before adding that the FDA’s position is that if you incorporate AI into an existing piece of hardware, you must treat the new product as an entirely new device. You can create a separate AI app instead, but whatever you produce must be delivered in a “in cybersecurity-hardened and technically thoughtful way.”

Danois was also asked if the partnering language and mindset is different in these partnerships, given the disparities between tech and pharma corporate and alliance cultures. He responded first by making an important distinction between pure technology ventures that are focused solely on creating AI apps and services and medtech initiatives which use diagnostic tools and technologies to deliver AI-powered services. The latter already undergo a rigorous three- to five-year approval process—Danois cited pet scanners as an example. His larger point was that many collaborations are already comfortable with the longer-term regulatory and alliance cycles.

Danois had plenty more to share during his presentation. ASAP BioPharma Conference registrants can review “Artificial Intelligence in Clinical Care Delivery and the Opportunities to Accelerate Your Development and Commercial Strategy” anytime this week and beyond to benefit from his knowledge and expertise. They can also enjoy a dozen other prerecorded on-demand presentations, as well as the rest of this week’s completed livestreamed sessions.

Keep checking this blog for updates from the conference throughout this week! 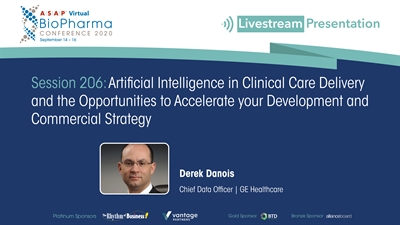 Why Are We Here? Partnering to Make Good Things HappenSeptember 17, 2020 Driving Through Spaghetti: Navigating the “Chaos” of Biopharma/Digital PartnershipsSeptember 16, 2020