More Than Just Chemistry: Partnering Rules to Live By in 2021

Ben Gomes-Casseres, CSAP, an author, ASAP thought leader, and professor at Brandeis University who has studied alliance strategy for more than three decades and still teaches a class on alliance management, kicked off this year’s ASAP Netcast webinar series by giving ASAP members a glimpse of what in his mind are the foundational principles for partner management. And although his presentation, “Simple Rules to Partner By—What Does the Turmoil of 2020 Teach Us?,” was billed as a discussion about what lessons we can apply from 2020’s unprecedented circumstances to our collaborations moving forward—spoiler alert—it turns out that the Curaçao-born instructor’s overarching philosophy is universal and can be distilled into three tenets:

Great collaborations follow these three rules and underpin them with three broader values: “truth, competence, and fairness,” according to Gomes-Casseres.

Throughout the presentation, the veteran professor and ASAP mainstay entertainingly spliced together lessons from such recognized “luminaries” as Dilbert, Superman, and Charlie Brown with real-world alliance case studies to illustrate how these principles determine partnership success and failure.

“You Can’t Lie About Real Value”

Delving into the first rule, Gomes-Casseres walked listeners through the story of a collaboration between Nikola Motor Company and General Motors (GM), a gross example of the concept of “fake value.” He played a video commissioned by Nikola of the company’s zero-emissions truck appearing to cruise on a freeway at highway speed in a setting evoking America’s heartland—only it was later discovered that the truck had no engine or driveshaft. The company had faked the video.

The lesson: senior leaders must take honest, unvarnished stock of their companies’ capabilities when evaluating their fitness for a partnering venture.

“You can’t lie about real value,” said Gomes-Casseres. “If you lie about the real value to begin with—what you can [do], what you can’t do, or what you hope to do—it doesn’t pan out.”

Can You Have Too Much Chemistry?

Governance is in many ways the glue that holds partnerships together. In Gomes-Casseres’s view, one of its most important functions is to fill the inevitable voids left in the letter of each alliance contract.

“The soul of every business partnership is to understand that the agreement that you have—whether it’s on paper or it’s in person, in handshakes—that agreement is incomplete. It doesn’t cover all unforeseen circumstances,” he reminded the audience.

What can go wrong when you rely too much on handshake deals? Gomes-Casseres told the story of a verbal agreement reached by longtime partners Fuji and Xerox on a proposed merger. Activist investors, including the world-renowned Carl Icahn, sued successfully to block this merger, which eventually led to a change in CEO at Xerox and a falling out between the two organizations. In Gomes-Casseres’s mind, this is a case where “drinking beers together and being good friends didn’t help.”

“You can have such a thing as too much chemistry,” he said. “We should balance the informal social contact with the formal economic and legal structure of a venture.”

Gomes-Casseres used two examples to demonstrate how—and how not—to share the value created by a joint venture. He led with the tale of Amazon and Toys R Us, which entered an exclusive online toy sales partnership agreement in 2000 and found themselves arguing in court over the former’s growing crop of third-party sellers four years later. The partners dissolved their relationship, but Toys R Us was never the same and eventually went out of business.

“Partners do change. Partner balance of power changes due to crisis, due to changes, or due to a bubble in this case,” said Gomes-Casseres.

Hold My Beer: Trust Is the Residue of Design

Our presenter contrasted this alliance with the Pfizer-BioNTech collaboration that is front and center today providing COVID-19 vaccines to people all over the world and giving everybody hope that we’re getting closer to ending the current pandemic. Gomes-Casseres was initially concerned that the two organizations were operating without a concrete agreement on how to split up the inevitable profits generated by their coronavirus vaccine. However, upon further review, the two companies had previously come to terms on a contract for a flu vaccine initiative in 2018 that addressed up-front payments, sales, milestones, future royalties, company shares, and other financial arrangements.

“It’s not as if these companies were working together on a handshake because things were moving so fast. They luckily had structure in place. You could say ‘luckily’ but you could also say ‘brilliantly,’” said Gomes-Casseres.

The bigger takeaway conveyed in these two stories is quite straightforward, in his view: “It’s important to share the value in a way where all parties feel remunerated properly for their work.”

Gomes-Casseres had plenty more insights into how companies instill truth, competence, and fairness into their partnerships. ASAP members can view "Simple Rules to Partner By—What Does the Turmoil of 2020 Teach Us?" in its entirety, as well as several years’ worth of past Netcast webinars, in the association’s Member Resource Library. Watch it today and find out why Gomes-Casseres “never trusted trust” and pooh-poohed the “idea that trust comes from beers or being my cousin or you know my cousin. That’s not trust.” 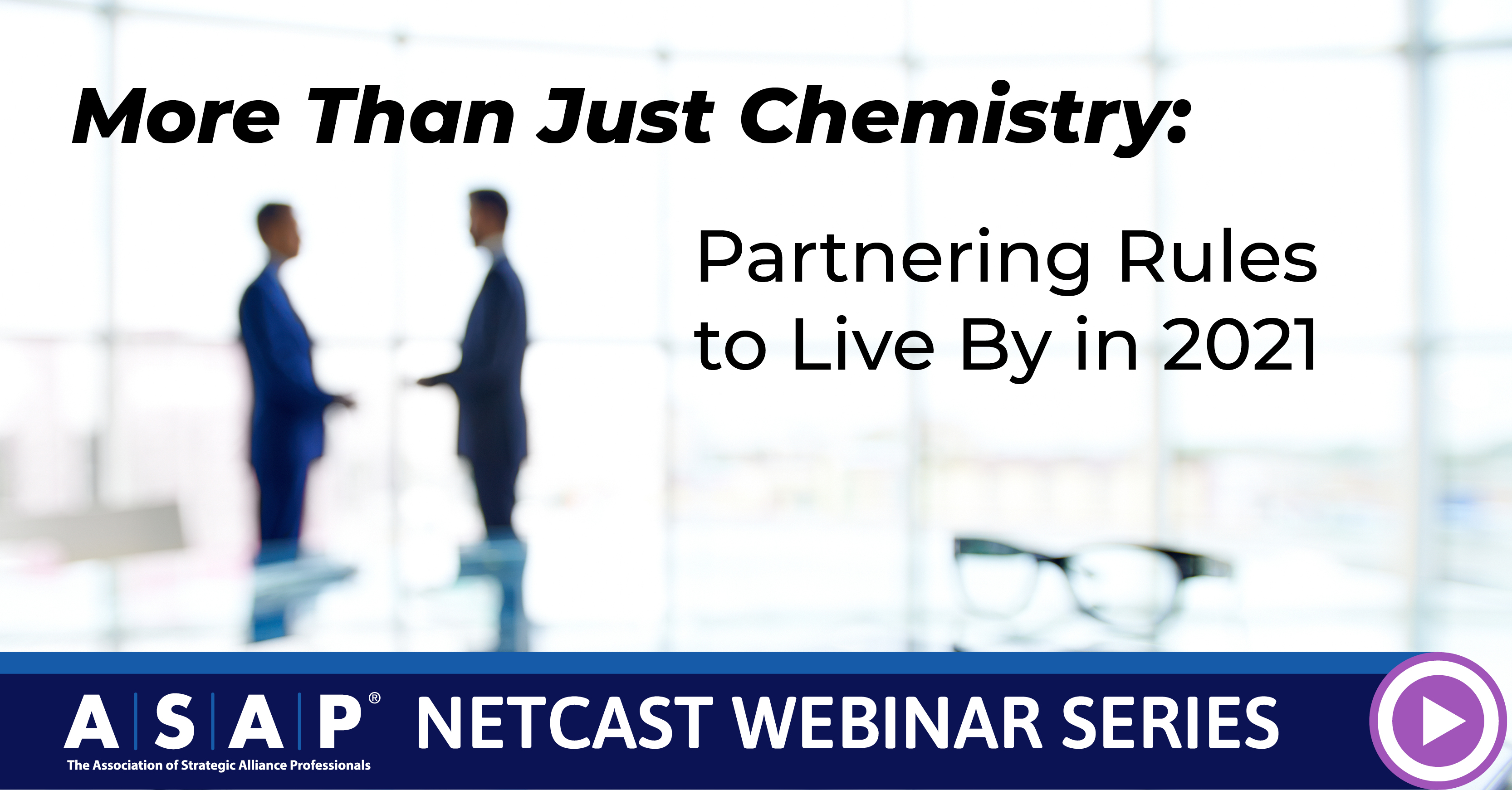