Operationalizing the Future: An Ecosystem Tale

An ASAP Collaborative Connection Monthly webinar held earlier this month explored emerging ecosystem partnering models, new selling motions, the application of bilateral alliance management skills to multilateral partnerships, and more—including how these changing processes and strategies are getting figured out, and by whom.

In the webinar, “The Transformation Ecosystem: Partnering Strategy for a New Year,” moderator Norma Watenpaugh, principal of Phoenix Consulting Group, explored these and other questions with her guest, Greg Sarafin, principal and global managing partner for the EY Ecosystem.

Sarafin introduced himself by noting that he’s a bit of a latecomer to alliances and ecosystems.

“I’ve now become fairly well branded as a professional in ecosystem and partner relationships,” he said. “But I did none of that until I was in my mid-50s; I was in other areas of the business. I was ‘voluntold’ five and a half years ago [to take this role] and I was somewhat trepidatious about it, but it turned out it was one of the best career moves of my life. It’s been really exciting, but I am not a lifetime professional as many people in this group are. I’m a Johnny-come-lately.”

Here Come the Cats—Round Up the Herd!

Sarafin observed that partnering is increasing across all industries, but the skills and knowledge needed to perform what Watenpaugh called “cat herding and orchestration across multiple partnerships” are far from evenly distributed.

"It’s easy to say ‘partner,’ but it’s really hard to do,” Sarafin said. “Every industry since the beginning of time has had partnership models. But typically each industry has had a particular flavor of partnering. They don’t all look across other industries and say, ‘Well, could we use these other partnering models in our industry?’ Consumer products companies generally partner using cobranding relationships. [With] energy companies, generally their partnerships are joint ventures to pool capital to do large infrastructure projects like gas pipelines, or other big energy distribution costs that they’re trying to defray across multiple sources. We talked about technology—and pharma’s another industry that’s all about partnering. It’s very much a partnering model.

“But we’re seeing that even industries that have partnered a lot are increasing the ways and the scale at which they partner, and industries that haven’t typically partnered a lot are now leaning forward and realizing, ‘We need to change our mindset’—and I use this term a lot, mindset. Half of what I’ve been doing for the last five years is change management. It’s been changing how people think about the fundamental equation of client value.”

A World of Outcomes and Experiences

Because, said Sarafin, the world itself is changing, and thus the needs and expectations of clients, business customers, and people in general want are changing too. And that has implications for partnering and ecosystem strategies.

Business leaders, he said, must ask themselves: “Who is the ultimate client, what is the value proposition that they’re going to respond to, and then recognize that there’s a general trend in the world. We’re going from a world that sells products to consumers to a world that sells outcomes with superior experiences.”

Information technology certainly provides ready examples of “as a service” offerings that provide particular outcomes, but Sarafin emphasized that it’s happening in other verticals as well—like the automotive industry, which is slowly beginning the transition from selling vehicles to providing mobility as a service. Younger generations in particular recognize that they don’t necessarily need to own a car; they just need to get from one place to another at a certain time.

“You take any industry, there is that sort of pivot to outcomes,” he explained. “What am I as the consumer ultimately trying to do, as opposed to the appliance I use to do it? And what is the superior experience that would make me pick you over your competitors? If you think about it just logically, a car company is not going to be able to create all the experiences within its capital structure, its distribution model, its surface area to market, that are necessary to create that mobility experience. They’re going to have to partner. That’s true of every industry: they’re all going to have to learn how to do this at scale.”

This Is Not a Channel; It’s the Future

Sarafin said that many in his industry especially can get caught up in thinking about channels, direct versus indirect sales, and the like—and he himself wasn’t immune. But he came to realize there’s much more to it when you’re talking about ecosystems and partnering.

“When I took this role, I had this idea that ‘I’m going into the indirect channel. What am I going to do? What do I do on the direct sales side, or the indirect sales side?’ Then I realized, no, that’s actually not where I am. Where I am is I’m on the value creation side of the business. I get to create new types of value through commercial relationships and partnerships that could not have been otherwise created but for the existence of those relationships and the combined thought and innovation from teams coming together from different companies to identify different problems that we were blind to. That is the future.

“And then of course, that future needs to be operationalized. And that’s where [alliance professionals] come in. Because as we partner at higher and higher volume and scale, partnering doesn’t happen for free. There is an operational cost to partnering, and it is complicated.”

In an ecosystem engagement, where EY may partner with SAP, Microsoft, PTC, Dell, IBM, and others, those complications can multiply.

“We’re mixing and matching up multiple partners to create truly higher value propositions for clients,” Sarafin said. “The level of complexity goes up almost asymptotically with that, so [you need] to have a really strong partner function, partnering capability—partnering processes, technology to enable it, people who know how to manage partnerships.”

In that ecosystem model, the selling motions may be different, and may differ from one engagement to the next depending on who the ultimate customer is and thus which partner takes the lead—and as Watenpaugh noted, “you don’t want to look like the Seven Dwarfs in front of the client, you want to look like an integrated team”—but the strategy will need to get figured out by partnering professionals who are steadily gaining experience in the ecosystem realm.

“We’re seeing ecosystem business models, partnering models, take off in all industries,” Sarafin noted, “and very quickly in these initiatives, people realize, ‘Oh my goodness, we don’t have the skills, we don’t have the people, the processes, the technology…how do we enable this?’

“In a sense we’re at a point in history where we’re all going to figure it out together. I would love to tell you that we’ve nailed it and figured it out in my shop. I think we’re leaders in thinking about it, investing in it, and actually doing it—but it’s not something I would say we’ve mastered. I think there’s a lot of learnings to come. Maybe this group can start to capture some of that, as an evolution in how we’re finding the standards of what ‘good’ looks like.”

Far more fascinating insights from both Sarafin and Watenpaugh came to light than could ever be contained in one blog post, so ASAP members, be sure to check the ASAP Content Hub for the full recording of this webinar, coming soon! 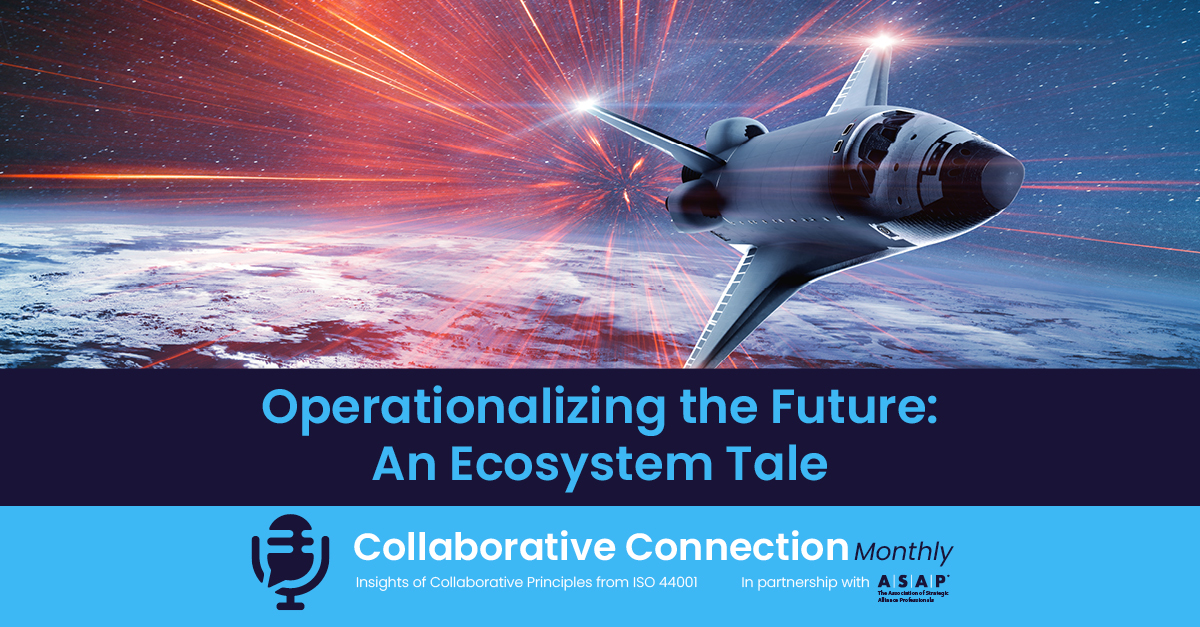 Under the Influence: Alliance Management's Superpower Distilled January 25, 2023 by Jon Lavietes Agents of Change: Alliance Professionals Keep Calm and Carry On January 12, 2023 by Michael Burke To Everything There Is a Season: Looking Ahead January 5, 2023 by Michael Leonetti Guest Post: The Birth of the Partner Showcase January 3, 2023 by Ezra Schneier Don’t Just Let Things Happen! ASAP Roundtable Zooms In on What Makes an Alliance Leader December 28, 2022 by Michael Burke
×