“We Need Partners—Fast!” Leveraging Partnerships to Respond to Paradigm Shifts

For old established companies, responding and adapting to market changes and shifts in technology and consumer buying behavior can be especially difficult. When the old ways of doing business no longer bring in the revenue they once did and the once-revered firm struggles to maintain its top market position, entrenched internal processes and stagnant thinking can lead to a steady decline—or worse, an “extinction event” that topples the old behemoth.

That might have been the case for Philips Lighting, which was spun off by Philips in 2016 with a new name, Signify (but still uses Philips branding for hardware products). Philips began its life in 1891 as Royal Philips, and was a market leader in lighting for at least a century thereafter. According to Ivo Rutten, vice president and head of global strategic alliances for Signify, the history of lighting amounted to approximately “110 years of tranquility followed by four major paradigm shifts in two decades.” He made these and other observations as part of his keynote address on the second and final day of the ASAP European Alliance Summit held Nov. 14–15 in Amsterdam.

He even went so far as to compare these paradigm shifts to “the meteors that killed the dinosaurs.” The four paradigm shifts were the advent of LED lighting, lighting systems, services centered around lighting, and “light as a language,” involving the increasing use of Internet of Things (IoT) technologies.

A company whose main business was ordinary consumer lighting found that this line of business was no longer so important. “Everything the company was based on was wiped away,” Rutten acknowledged. So in order to deal with these successive meteor strikes—and not to end up as dead as the poor dinosaurs—Signify realized that it “needed partners—fast.”

And it was all very well to develop new lighting systems, services, and IoT applications and move into B2B. But to get businesses to buy and install them? IT managers at companies would say, “Philips? In my network? No way. I’ll be hacked.” Philips/Signify had no credibility in this area, so it had to seek out partners that would help it gain entry.

A big one was and is Cisco, which could help with its own reputation in IT to pave the way. Now Signify could say, “You won’t be hacked—just ask Cisco,” Rutten said. Cisco’s credibility in network hardware and Signify’s lighting expertise combined to make a unique and appealing value proposition.

But in order to partner effectively, Signify had to learn and develop a number of partnering best practices. Among the most important, according to Rutten:

Added to these must-haves, Rutten said, were a number of key insights, including:

Although not purely transactional, it’s a reality that in an alliance each party must give and get, or as Rutten said, “Their contribution must match our needs.” He noted the importance of creating a balanced first-draft term sheet—“our end and your end”—and putting it in front of the partner before moving on to a dialogue and working out differences, aligning objectives, etc.

As in other companies, the governance structure of significant alliances involves three tiers: day-to-day alliance management, decision making by a joint steering committee, and C-level interaction by the heads of both companies.

Such principles and practices are important enough in a one-to-one alliance, such as with Cisco, but even more so when multiple partners are involved, as in the Philips HUE ecosystem, which blends security, lighting automation, the setting of events, tasks, and routines at home, a user-friendly interface that responds to voice or phone commands, and full integration into a smart home.

To make HUE operational, an ecosystem was needed, involving many partners including Apple, Amazon, Nest, and Bosch, as well as more than 50,000 third-party developers who have so far put up over 900 apps on the Android and Apple platforms. As Signify and its many partners move forward, more use cases will be identified and the whole ecosystem will become an expanding universe—at least until the next meteor hits. 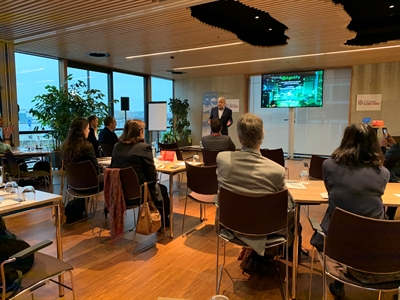