Five years ago, Bayer’s R&D alliance management group knew it needed changes. Even though its core partners were happy in their collaborations with the 150-year-old pharmaceutical and over-the-counter medicine institution, the external perception in the broader pharma community landed in the lower tier, according to its internal research.

The R&D group embarked on changes to its alliance practice in order to improve its function and achieve three larger organizational objectives: 1) deepen the company’s understanding of the mechanisms of diseases that were getting increasingly complex; 2) broaden its drug portfolio into new modalities, technology, and external innovation; and 3) make its operating model more flexible, in general.

Bayer was contending with a variety of changes in its operating environment. First, the number of alliances—and the number of people from outside the organization working on Bayer initiatives—was growing fast. Moreover, the company was engaging in new types of collaborations, such as digital health partnerships, in which it found itself in the unfamiliar position of being the inexperienced party. Partners increasingly had their own alliance networks playing roles in Bayer collaborations, which added a new layer of complexity to the management of these collaborations.

Two Bayer executives shared the story of the company’s still-in-progress alliance management makeover in an on-demand 2020 ASAP Global Alliance Summit session, “Enabling Strategic Change—Cultural and Alliance Capability Development,” which took viewers through the internal and external changes that were made in order to modernize its alliance practice and improve its standing within the broader pharma partner community.

Bayer complemented this individualized training with its Alliance Community Excellence (ACE) initiative, which brought in outside experts, sometimes from unusual places, to hold court on facets of alliance management. Michael Kennedy, PhD, director of strategic alliances in Bayer’s Business Development & Licensing group, spoke of one instance where a former FBI trainer taught alliance managers how to identify and neutralize lying and deceit. The ACE program also placed an intense focus on external networking, including deepening the alliance group’s interaction with the ASAP community. As part of the ACE program, the alliance management practice also set up a help line so that nobody in the organization felt like they were on an island.

“Who are you going to call? It’s not Ghostbusters. It needs to be somebody within our broad alliance community that people can call, either as an alliance manager running into some challenging topics and wanting to discuss it or somebody on an alliance team. They can pick up the phone and call one of us alliance managers for help,” said Kennedy.

Bayer structured its training into six core competency categories: 1) alliance know-how, 2) collaboration, 3) joint problem solving, 4) organizational agility, 5) flexibility, and 6) conflict management, and developed curriculum for executives of different levels (e.g., rank-and-file team members vs. alliance leaders). Each of these areas consisted of three to five individual skills. Kennedy explained that the organization sees synergy between these areas and that they can be broken down into three complementary pairs—organizational agility helps optimize alliance know-how, flexibility aids collaboration, and conflict management is an inevitable part of joint problem solving.

Kennedy walked the virtual audience through a set of foundational principles grouped into two broad categories—1) “Establish,” which dealt with structure and process, and 2) “Practice,” guidance around mindset and culture—that similarly went hand in hand with each other. Each alliance needs resources—namely, the right people, capacity, and investment—but they are useless if partners don’t have access to Bayer leaders. (Resources represent an “Establish” principle, while access comes from the “Practice” category.) Governance, another “Establish” principle, is nothing without alignment, which Kennedy defined in this context as “speaking with one voice.” Communication, both in terms of timing and consistency, to partners and the public at large is paramount, but problem-solving capabilities will eventually be necessary when it breaks down. For years, Bayer struggled to acknowledge partners’ differences, but in recent years the company has strived to safeguard the value joint initiatives are expected to bring to allies. Carry out all of these principles, and Bayer partnerships will generate execution and trust.

“[Execution and trust] really are the foundational pieces of our partnering principles,” said Kennedy.

A New Alliance Culture: Play to Win vs. Playing It Safe

Of course, principles and competencies only go so far if a corporate culture isn’t designed to optimize them. Bayer had a lot of work to do in this area, according to Christoph Huwe, CSAP, PhD, director of strategic alliance development for R&D Open Innovation & Digital Technologies at Bayer. First, the company had to stop operating in silos. To that end, it adopted the mantra “assets over function,” recounted Huwe in describing the new collaborative mindset that encouraged employees engaged in alliances to prioritize activities that were necessary to advance a drug candidate to a clinic or patient. Bayer relaxed its traditionally “top-down” command-and-control model, so that its employees had the freedom to execute accordingly without having to run every decision up the ladder within the company.

Bayer similarly loosened its risk-averse ways to enable the alliance practice to “play to win and learn over playing it safe”—according to Huwe, the organization was previously less inclined to make mistakes. From a strategic standpoint, Bayer’s mentality switched to one of “science over process.” That is, instead of trying to force a drug to work for a preplanned indication, it would follow the science and pursue another indication if initial research showed the asset was better suited for it.

Of course, culture starts at the top, so the alliance practice puts its senior leaders through rigorous team and individual training to lead by example and accept what Huwe characterized as “very candid feedback about inconsistencies” in what they preach and what they do vis-à-vis partner initiatives. Midlevel management retraining was also critical, according to Huwe, since the majority of people working on alliance engagements reported to executives at this level.

Since senior executives usually developed the company’s alliance strategy in advance, it was up to the alliance practice to rebrand itself and communicate the new vision to the rest of the organization through “game-ified” cross-functional team-based exercises. For example, the alliance practice created a board game that was divided into the four pillars of Bayer’s internal culture—collaboration, experimentation, customer focus, and trust. About a dozen players would break into smaller groups where they would be asked to discuss whether actions detailed on playing cards were “blockers or drivers” of these four cultural mainstays. The smaller groups would ultimately reconvene to share and discuss their findings in one large discussion.

Out of Its Comfort Zone and into Global Pharma Networks

Bayer also embarked on several new measures to improve its reputation as a partner externally.

Case in point, Bayer previously had a company policy limiting press releases to deal signings and phase 3 or later. However, the company has recently relaxed that internal standard to accommodate partners that were eager to issue announcements detailing successes in earlier stages of the drug development cycle. In addition, the normally process-driven company has taken steps to become more flexible. For example, it cut the number of steps in its governance process to approve a deal by more than half.

Bayer has in some cases chosen to collocate employees at partner sites, and it has also opened up business and innovation centers in regions around the world considered hotbeds of pharmaceutical activity, such as San Francisco, Boston, Osaka, Beijing, Singapore, and Berlin.

“We’re going to where the networks are already existing and not asking people to come to Bayer [headquarters],” said Kennedy, who added that the company can now take partners to these sites to give them an up-close look at Bayer’s affairs.

The company has established effective online platforms, hosted more partnering events, and increased its conference presence, even bringing actor Michael J. Fox to one show to speak about the company’s efforts around Parkinson’s disease. Today, half of the company’s top 10 products come from partner initiatives, accounting for more than half of Bayer’s revenues.

The opening slide of Kennedy’s roadshow presentation now says it all: “Bayer is a partnering company.”

Huwe and Kennedy had more to share about Bayer’s partnering transformation, so make sure to use your Summit registration information to catch the full presentation in the Summit portal. While you’re there, peruse more than 20 other insightful sessions from the first-ever virtual ASAP Global Alliance Summit. 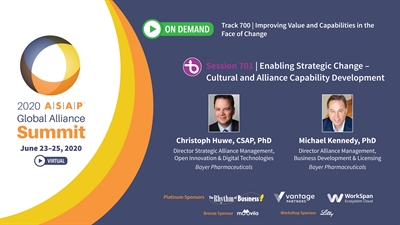