In pharma, the lines between business development and alliance management are blurring in many respects. The “buy” and “partner” functions no longer reside in separate spheres. Alliance managers are increasingly being pulled into mergers, acquisitions, divestitures, and carve-outs. Both alliance agreements and M&A deals, and the larger programs they are a part of, are getting more complex. What alliance management skills serve these types of transactions well? What are the biggest differences between alliance and acquisition environments? Should alliance managers think about adding the M&A skill set? These are just some of the topics bandied about in the 2020 ASAP Global Alliance Summit on-demand roundtable “Navigating the Differences Between Alliances and Integrations—‘Snowboarding for Skiers.’”

Moderated by Nick Palmer, managing director at BTD Consulting, a pair of longtime pharma alliance leaders and ASAP community mainstays—Brooke Paige, CSAP, former vice president of alliance management at Pear Therapeutics and ASAP board chair, and Steven Twait, CSAP, vice president of alliance and integration management at AstraZeneca—joined Palmer’s colleague acquisitions expert Carlos Keener, managing partner at BTD Consulting, in a discussion about these two merging worlds in a two-part roundtable—the panelists convened before and after the live portion of the Summit.

Palmer began by asserting that senior management has recognized that alliance managers have valuable transferrable skills that apply to merger, acquisition, and divestiture activity.

Paige expanded on this notion by noting that seasoned alliance managers come with a solid understanding of contracts, lots of practice articulating strategy, and a track record of running high-level cross-functional teams. But most of all, alliance managers possess “a mind-reading superpower,” she said with a laugh.

“We are actually mitigating risks and taking care of issues before they’re even experienced by the companies themselves. We’re almost secret superheroes,” she explained.

Twait added that alliance management’s familiarity with governance structures is becoming invaluable in transaction negotiations. In addition, his team is being asked to play a role in executing transition services agreements (TSAs), services one company pays another for after a deal closes. TSAs can expand an alliance practitioner’s knowledge base as these agreements can potentially involve larger organizational initiatives in a variety of areas, including but not limited to regulatory, manufacturing, finance, and technology.

The Alliance Win-Win vs. “What Does This Mean for Me?”

Keenan felt that M&A groups have a lot to learn from alliance management culture.

Culture cuts both ways, however. Some alliance norms aren’t common in investments and divestitures, which could lead to some awkward moments if alliance managers aren’t careful. For example, where the beginning of an alliance is often marked by optimism—companies are excited by what a partner can bring to the table—fear stalks the rank and file immediately after an acquisition.

“In alliances, we’re always looking for the win-win,” said Twait. “Not everyone will win when you’re integrating an entity… Not everyone sitting around the table may have a job after this acquisition fully closes. Alliance managers are well prepared to think about some of those human risks that could surface in an acquisition.”

Paige later prescribed potential solutions for dealing with the human element. In the past, she has led teams that have utilized town halls, backgrounders, and slide decks to communicate why senior leadership made a deal and what the acquiring company was expecting from its new asset. Paige strongly recommended partnering with HR and conducting “listening tours” to address employees’ concerns.

“The elements of things we would do in an alliance launch or in a new team member onboarding can really add a lot of value and be applied in these integration efforts,” she said.

Accentuate the Positive, but Not at the Expense of Authenticity

The subject came up again later in the post-Summit discussion. Keenan had a word of advice for communicating to employees of acquired companies: “not trying to cover it up, not trying to be overpositive, not overpromising up front is so critical to an integration.”

Yes, it is important to put a positive spin on the transaction and how things will transpire in those first several months. However, it should never be at the expense of authenticity. He recalled one instance of an investor relations professional taking the wrong tack in post-transaction communication efforts.

“The view was, ‘We just have to wow the employees. We have to ignore the bad stuff. We have to overwhelm them with good news.’”

By contrast, Keenan juxtaposed that case with the story of the “best Day One” he had ever seen in a transaction. The head of the acquiring company was up front about why his organization bought the acquired entity, how much it paid, and what it was going to do to make that money back.

“The individual was very transparent,” he recalled. “He walked the message through shift by shift, group by group, answered every question. When there was an I-don’t-know, that was perfectly fine. It was, ‘I don’t know now. We’re not knee-jerking into a plan immediately because we want to take a little bit of time to work out what we’re going to do, but we will tell you by date x.”

Another potential blind spot: the contrasting timelines of mergers and alliances. In pharma, alliances are expected to last more than a decade. Alliance managers will be more judicious in pushing back on their partner counterparts knowing that they will be working together for several years. M&A transitions, on the other hand, happen over the course of several months.

“A seasoned alliance manager could take too long-term of an approach to the project,” said Twait. “There will be tradeoffs you need to make. I don’t want to say that you don’t want to be as collaborative, but you just need to recognize that you may need to make short-term decisions that may not seem like it will be best in the long term, but there may not be a long-term relationship.”

Keenan pointed out that senior leadership usually fuels this short-term thinking. The process of integrating a new entity is fast-paced and often closely observed by investors with high expectations.

“You have senior management pressure to actually deliver on the business plan from a financial standpoint, to deliver on whatever promises were made in the announcement. There’s also a need to generate momentum from an emotional standpoint, to demonstrate success to retain staff performance, staff morale, talent retention, and so on.”

Later in the discussion he reiterated that integrations, in contrast to alliances, are an “event, not a process,” and asserted that the old saying about “perfect being the enemy of good” is an appropriate mantra for integrations because they normally require companies to find quick solutions.

All of the panelists agreed that alliance managers thinking about getting a flavor of the M&A world must get accustomed to a little sandpaper. Twait insisted that those on the front lines of mergers and acquisitions will need a “thick skin” because tumultuous conversations and events are par for the course in these types of transactions. He invoked the famous song from the movie Frozen in cautioning alliance managers that they will have to learn how to simply “let it go” if they want experience in this area.

Paige concurred. “If you have a systemic aversion to delivering bad news or disappointing news, that might be the rule-out criteria that this might not be the role for you.”

Keenan looked at the issue from the other side. “If your integration approach is to deliver everything on time and in budget, leaving bodies along the way, then you are likely not going to be a good alliance manager. But to be honest, you’re likely not going to be a good integration manager, either. Yet again, the skill sets are actually quite in common.”

Flesh Wounds: The Meaning of Life in M&A

Later in the conversation, Palmer asked the panelists if alliance managers are guilty of living in Monty Python’s world—“always look on the bright side of life”—and not fully acknowledging the turbulent nature of integrations and divestitures.

Twait joked that “in an integration, you will have multiple flesh wounds. ‘I just cut your arm off!’ You say, ‘No you haven’t.’” Twait was making the point that alliance managers are often resilient in the face of change in the way “the Black Knight needed to be.”

“So we’re not yet dead,” quipped Paige.

“Navigating the Differences Between Alliances and Integrations—‘Snowboarding for Skiers’” isn’t dead yet, either, at least for Summit registrants, who can still use their registration credentials to watch this roundtable and gain numerous other insights shared by the panelists throughout the discussion. 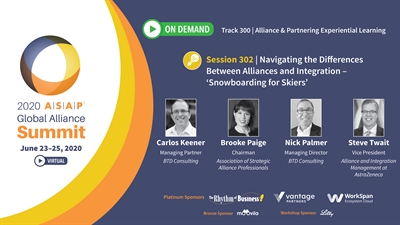