The Future of Alliances

One of the things many of us in and around ASAP are grateful for is the amount and high level of thought leadership contributed by our members, speakers, panelists, and participants in events and programs. It allows us to learn and gain unique insights into areas as diverse as gender differences in communication, the skills, steps, and thinking required for go-to-market efforts, the challenges of biopharma commercial alliances, and how to talk to your CEO about partnering—and not get booted out the door for wasting his or her time.

Among the gurus, sages, and seers of alliances, channels, and ecosystems who have enthralled ASAP audiences over the years is Jay McBain, now chief analyst at Canalys and formerly at Forrester, IBM, and Lenovo. For some time McBain has taken us on various journeys into the future—the future that in fact is happening right now, forming and reforming as we blink. He guided us on yet another of these magical mystery tours on the first day of the ASAP Global Alliance Summit in Tampa in his plenary address, “The Alliance Tipping Point: Opportunity or Risk?”

The question of opportunity or risk is perhaps rhetorical; of course it’s both/and—as in the old Saturday Night Live skit, it’s “a floor wax and a dessert topping.” Either way, it’s about the future: the future of business, of alliances, of ecosystems, and much more.

Keeping Up with the Future

It’s a future in which Ford Motor Company becomes a tech company, as it moves into electric vehicles and eventually, McBain predicts, into transportation as a service. It’s a future in which channels branch out, dry up, merge, and morph into marketplaces, ecosystems, and direct routes to market.

It’s a future that started to take off back in 1999 when Salesforce was founded. “That small company changed a lot of things,” said McBain. (Could this be the understatement of the decade?) And he predicts that Salesforce will one day soon reach a $1 trillion valuation.

But this future is not about Salesforce or Ford. Nor IBM, where McBain first worked as an intern 29 years ago and stayed for 17 years. IBM has long led the patent race, but McBain lamented that Big Blue never managed to make viable products or solutions out of its Watson AI, nor did it embed Watson into others’ products. It beat Garry Kasparov at chess, but it didn’t cure cancer or fulfill some of the other grand visions predicted for it. Various CEOs and revenue shortfalls later, IBM may have missed the boat.

Meanwhile Dell, Lenovo, and Cisco are among the companies that have “gone all in” on subscription and consumption business models. HPE, according to McBain, has already “been on the journey the longest.” B2B customers and buyers act more and more like consumers, and in that vein McBain advised the assembled to “start getting obsessed over your customer’s 28 moments” along their buying journey, no matter what your company sells, and no matter what industry. Among other things, that means striking alliances with the companies and entities that own those moments. Those might be affiliates, advocates, affinity partners, or various kinds of influencers.

Or as McBain put it, “Who is your Kim Kardashian?”

It’s a future in which companies like Microsoft—“the biggest channel in the world”—has replaced its channel sales chief with an ecosystem chief. Ditto for AWS, Google, and even IBM. These ecosystem leaders speak a new language of multipliers instead of margins, of marketplaces instead of channel marketing, of getting the customer to the dance in the first 30 days, and then “every 30 days forever, making a customer for life.”

It’s the subscription model. It’s influence, land, and expand. It’s a world where the average customer journey has seven partners associated with it.

In this future, according to McBain, skilled and visionary alliance leaders will be desperately needed to break down silos and replace them with ecosystem teams that are embedded or “matrixed” throughout organizations and across all lines of business. They’re needed to become the ecosystem orchestrators, and to report to—or better yet, be installed in—the C-suite to help make this change happen today, and tomorrow.

“Alliance leaders are getting better at changing the language, the lexicon, of what we do,” McBain said. “This is significant new value-add driven by alliances.”

Watering Holes in a Changing World

“There’s some really good things happening in the alliance community. It’s about 100 people,” he continued, referring to key alliance leaders. He urged those present to look to the “watering holes” where these leaders and influencers hang out, to find and follow them via the magazines, websites, social media platforms, and other areas where they congregate.

But there’s always space for more leadership—in fact, the world of alliances, partnering, and ecosystems is crying out for it every day.

“I think in this room is where that leadership comes from,” McBain said. “It’s that general manager, CEO-like alliance manager that’s going to win out. People are now seeing this really intelligent stuff. We don’t have templates yet, or frameworks, but we have early learnings. The average company today is underrepresented in partnering by 10X. But I’m very excited by alliances’ future.”

Jay McBain’s plenary address was one of many great presentations at the 2022 ASAP Global Alliance Summit, which just concluded. If you couldn’t attend or if you missed any of the other plenaries, panels, master classes, or other presentations, check back on the ASAP Blog as we roll out more coverage in the days and weeks ahead! 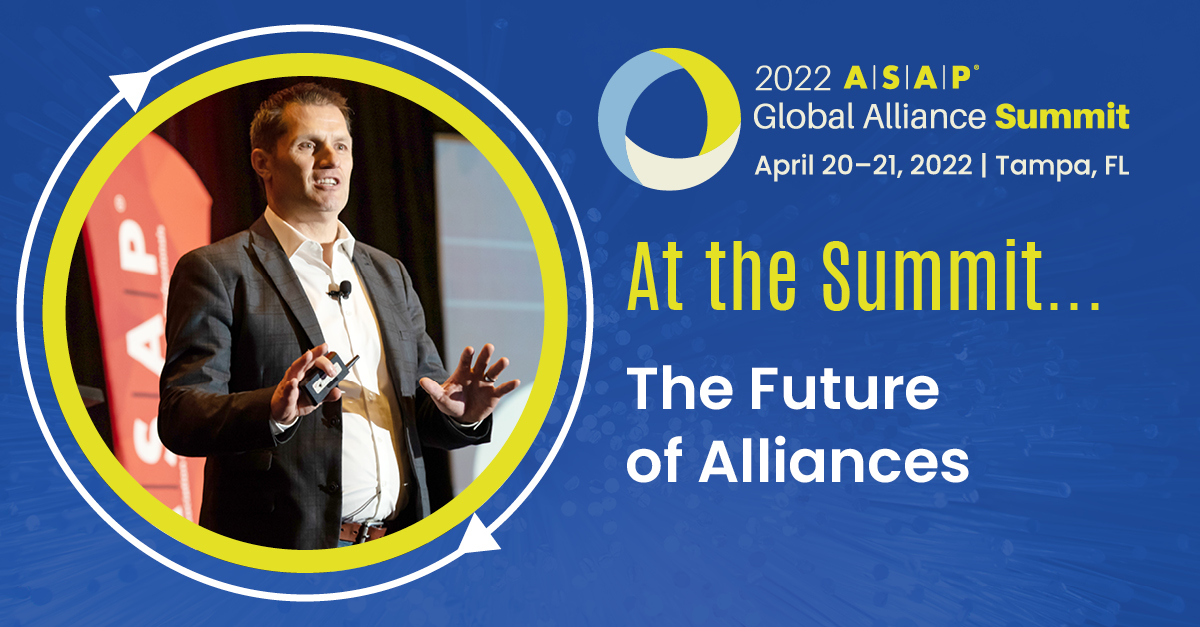