Part of what makes the ASAP Global Alliance Summit the preeminent conference in alliance management is that its programming explores both new and unique issues facing the profession, as well as evergreen challenges that are, and always will be, a fact of life. While Jay McBain helped the technology segment of the audience with the former, Adam Kornetsky, principal at Vantage Partners, moderated a panel that tackled the age-old exercise of “Building an Alliance Team,” which has gotten significantly more challenging in this employee-friendly labor market now commonly known as the Great Resignation.

Systems Thinkers Provide a Bounce and Keep from Lagging

Kornetsky was joined by three panelists who have put together alliance management practices in very different contexts. Any discussion of assembling a staff has to involve hiring, and Laura McCluer, CSAP, vice president of global alliances at Xactly Corporation, who has tripled her company’s alliance management headcount after taking over an operation which had “no partner management whatsoever”—partner-related activities were narrowly confined to acting like “caddies,” supporting sales reps and geographical executives when McCluer arrived—provided invaluable insights into what resonates and what sets off alarm bells in an interview.

In building Xactly’s alliance practice, McCluer sought out “people who can think strategically and act tactically and actually bounce between those consistently.” For the former, she looked for those who can demonstrate an aptitude for “systems thinking” and understand how to tell the partnership story internally in a dynamic way that earns support from key stakeholders across the organization. To assess tactical acumen, she quizzed candidates on leading and lagging indicators of program success to uncover which individuals understood that they couldn’t rely simply on revenue, which in her view falls in the latter category.

In Over Their Heads or Bootstrapping It?

She also shared her two biggest red flags with the audience: 1) In McCluer’s experience, folks looking to move from sales to alliances are in over their head; they’re too tactical and accustomed to “a bigger village coming in and helping with a deal.” She added, “We don’t have that luxury of those resources, so you really need to be a Jack or Jill of all trades.” 2) She is also wary of alliance managers who have only been asked to steer collaborations through calm waters. She wants to see evidence of growth and innovation, simply “building something new”—expansion into new markets, for example. It’s easy to spearhead an alliance when it’s “humming along,” but McCluer wants “people who have had to build, recruit, or start over, who know what it’s like to bootstrap. If you’re too stuck in your rut, you might not be the right fit.”

To the first red flag, Katherine Kendrick, CSAP, head of alliance management at Jazz Pharmaceuticals, delivered an amen. Self-sufficiency is paramount in a role where even though you work with teams, you’ll be in trouble if you “expect backup singers with harmony.”

“Everyone Is Going to Learn from Everyone”

Kendrick had a much different challenge when she took over an alliance practice at Jazz, a company that had been primarily acquisitions-focused until a few years ago. Where McCluer has grown her alliance practice from 10 to 30, Kendrick still has a small team. “Going from two to three is a big percentage change,” she said. Kendrick sought out a diverse team, both in the “diversity, equity, inclusion, and belonging” sense and in the roles they have previously played managing partnerships at all stages of the biopharma alliance life cycle.

“I looked at building a team that had broad skills in the pharma industry, had broad experiences, and represented a strong diversity of thought in those skills,” said Kendrick. She stressed that with a small team, it’s not on one member to know everything; she encourages her team to frequently put their heads together to make the best decisions for the company. “Everyone is going to learn from everyone. It’s not about the job title.”

When it comes to retaining staff members in an environment where there are many incentives to peek over the fence to see if the grass is a brighter hue of green, Kendrick exhorted listeners to tend to each team member’s development goals outside of their core job skills. She spoke of empowering employees to serve on women’s networks or perform “externships” in other parts of the company, if that’s part of their long-term vision for themselves.

Steve Courtney, PhD, executive vice president and head of strategic alliance management at drug discovery company Evotec, who recently restructured his team of 20 into three broad groups—1) strategic alliances, 2) consortia and equity stakes partnerships, and 3) an alliance management central support office—utilizes monthly team town halls, one-on-one line reporting, and internal coffee breaks with colleagues from the business development group to foster “shared learnings” and create a “psychological safety zone,” in which “people can be open but challenged, as well.” He is looking to expand mentoring options with external organizations and sources after he observed how group trainings instilled more cohesion in his group.

“[Training is] a great way to align everyone on the same thought processes and skills, but it’s a great team-building exercise as well,” he said, to which Kornetsky replied, “What better way to bond than to learn together?”

And what better way to learn more about developing an alliance team than visiting ASAP’s Content Hub, where you will find more in-depth explorations on the subject in the Q4 2021 edition of the our flagship publication Strategic Alliance Quarterly (see the cover story, “Dream Team,” as well as feature stories “Now Hiring: Biopharma Alliance Managers” and “Building an Alliance Practice from the Ground Up”), as well as the November 2021 Strategic Alliance Monthly piece on legal software company Nuix’s efforts to erect an alliance practice from scratch.

In the meantime, 2022 ASAP Global Alliance Summit registrants can still watch replays of “Building an Alliance Team” and other conference sessions. Visit the event hub today to hear McCluer’s takeaway from a recent talk given by the president of the Society for Human Resource Management (SHRM): that an attrition rate of 25 percent or higher moving forward will keep us in a “constant mode of finding people.” 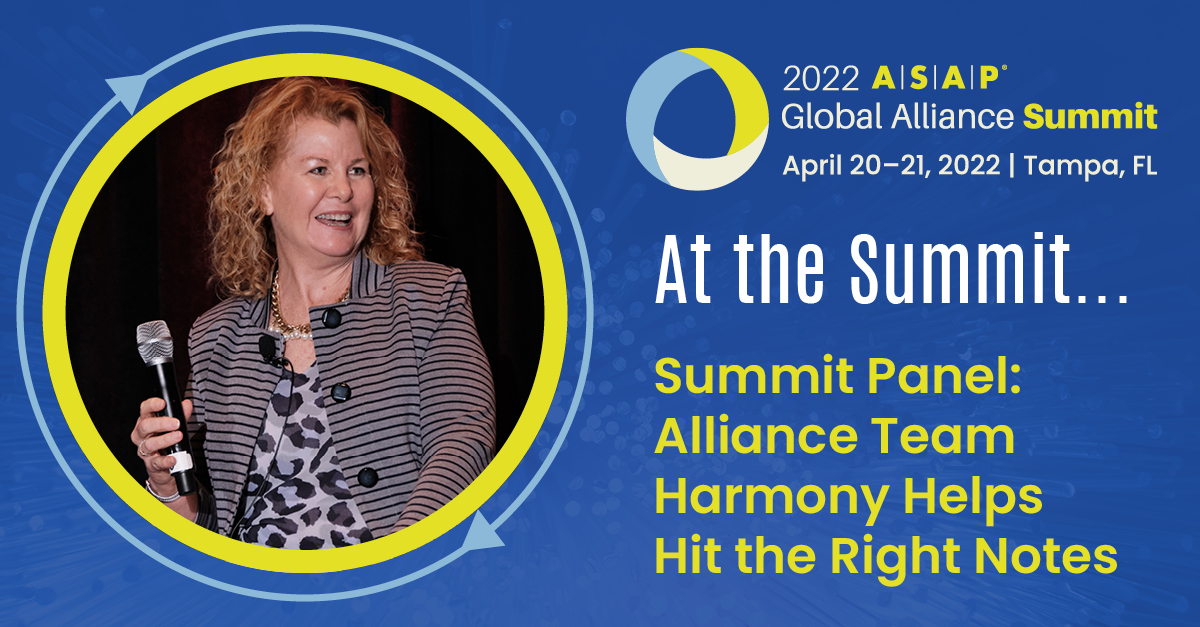