We’re Back! In Fact, You Could Say We Navigated the Storm

After a rousing and very warm welcome by ASAP’s president and CEO, Michael Leonetti, CSAP, the 2022 ASAP Global Alliance Summit got off to a terrific start this morning in Tampa.

From the stage, Leonetti justly exulted, “Two and a half years! We made it! So let’s celebrate!”

And it certainly seemed like a righteous celebration of getting back to an in-person Summit after all this time. (Or as one participant noted referring to the truncated reality of Zoom meetings: “Everybody’s got legs!”)

The last order of business for Leonetti before handing off the mic to this morning’s plenary speaker was to announce the nominees, and then the finalists, for this year’s Alliance Excellence Awards. The latter group, who will be toasted at a reception tonight, are:

Congratulations to the finalists! And now on to business—or rather, off to sea.

To the pounding rhythm of the Rolling Stones’ “Gimme Shelter,” Mark Denton took the stage. He is an international sailor, yacht racer, executive coach, and creator of Navigate the Storm, from which his talk today took its name. The subtitle, “How to Get Ordinary People to Achieve the Extraordinary When the Only Way Out Is Through,” says the rest, doesn’t it? Hardly.

As Denton expressed it, “It’s kind of a crazy story. Let me take you around the world and back again.”

Denton’s presentation concerned the BT Global Challenge, a grueling yacht race involving 12 teams, over 10 months, covering 32,000 miles in seven legs of varying lengths up to six weeks on the ocean at a time, sailing 24/7 “the wrong way around the world”—i.e., against the direction the Earth spins—under some of “the worst conditions known to man.”

It involves identical yachts with identical budgets and professional skippers like Denton, but the crews are 17 “rank amateurs” ages 18 to 60, no experience necessary, each of whom paid £50,000 for the privilege, 70 percent of whom had never sailed before. “A real slice of life,” as Denton put it, and he wasn’t kidding: his crew included a nurse, a retired CEO, a veterinary surgeon, a publican, a risk manager, and a mechanical engineer, among others.

And unlike alliance executives building their teams, he had no choice of his crew but was simply handed a list three weeks before the start of the race: “You can’t hire anyone, you can’t fire anyone. You have to work with what you’ve got.”

Denton began by finding out why people were going on this insane voyage, what was in it for them. What was their motivation? Some were very competitive and wanted to win; others didn’t care but wanted the experience. One woman said, “I’m just trying to find a husband.”

“We’re delivering people’s dreams for them,” Denton said. “That said, we’re in a race. We wanted to be on the podium.”

That was the goal: to finish first, second, or third. Vision, goals, and values: the latter became Safe, Happy, and Fast (more on that later).

Cutting to the chase as it were, the boats sailed from Southampton, England, to Boston; Boston to Buenos Aires; Buenos Aires to Wellington, New Zealand; Wellington to Sydney; Sydney to Cape Town; Cape Town to La Rochelle, France; La Rochelle to Southampton. And Denton’s yacht finished third overall—they made it to the podium.

But what did they learn? And what can we learn that we can apply to alliances and business in general? A few great quotes from this session help to tell the tale:

“Races are won and lost in light winds, just like businesses in recessions.”

“If you’re thinking about it, you should be doing it.”

“All roads lead to leadership.”

It will come as no surprise to alliance and partnering professionals—and especially those who had the good fortune to attend yesterday’s Leadership Forum—that the ultimate success of this venture depended on coordination, cooperation, and collaboration. On teamwork and communication. On clearly defined and delineated roles and responsibilities. More to the point, Denton outlined several “critical success factors” for getting his crew and their boat safely across the seven seas:

What Doesn’t Kill You…

It was these elements among others that helped this group of amateur sailors sail through a Caribbean hurricane (taking the safest way), regroup after a very disappointing leg that called Denton’s own leadership practices into question, deal with a failing generator damaged by contaminated diesel fuel, hold on and persevere through the southern Indian Ocean (“a pretty scary leg… It is brutal. The southern ocean spends all its waking hours trying to kill you”), combat boredom and torpor in the light-wind doldrums of the South Atlantic, and repeatedly achieve their various goals for each leg, including finding ingenious ways to beat other boats into the harbor.

In the end, a sort of three-part Navigate the Storm motto came into being:

Making some of the parallels between such extreme endurance sailing and alliances, Denton advised: “Involve people in the processes. People don’t like being told what to do, but they’re happy to do things.”

More pearls of wisdom emerged from this amazing experience than could possibly fit in this post, but suffice to say there was an ocean’s worth of food for thought, and it was a great starting line from which to hoist our sails to navigate through this already fascinating Summit. 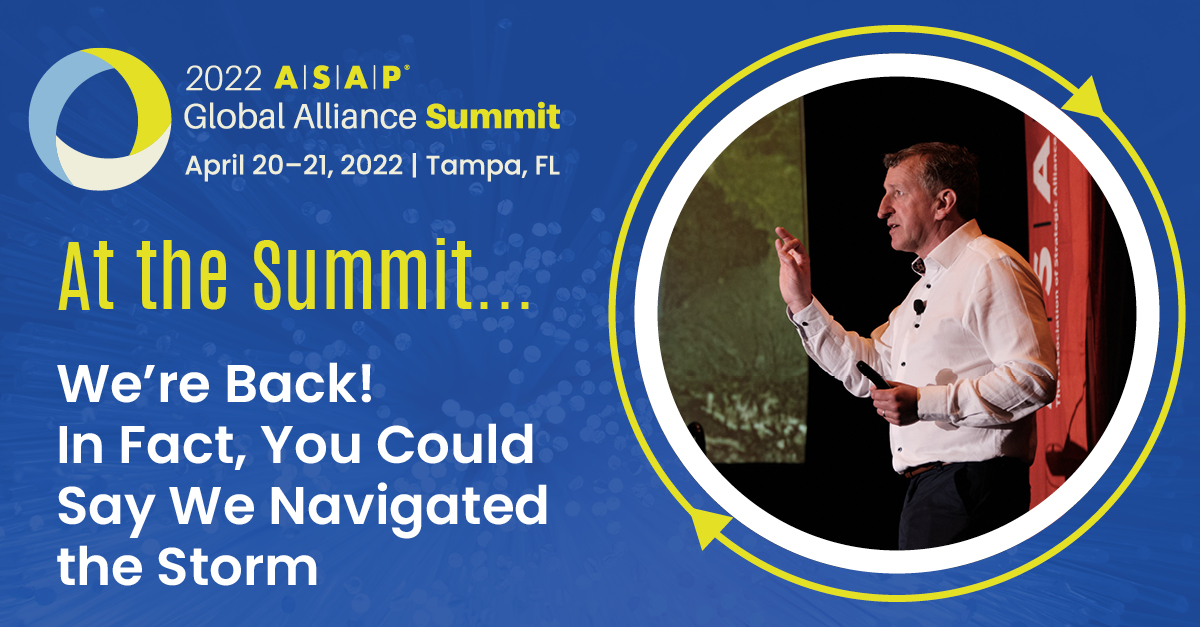