What Is Collaboration, Anyway? And How Can We Do It Better?

The ASAP Global Alliance Summit kicks off in earnest tomorrow—Wednesday, April 20, in Tampa, Florida—but some invitees got a special treat and sneak preview today. Two thirds of the afternoon session was led by Dave Luvison, executive in residence at Loyola University Maryland, exploring questions around the differences between and overlaps among the concepts of coordination, cooperation, and collaboration. The last third featured a talk and brainstorming exercise by plenary speaker Mark Denton, executive coach, international sailor, and creator of Navigate the Storm.

Luvison began with some polling questions to see how attendees viewed the concepts of coordination, cooperation, and collaboration. Stressing that “I’m not the terminology police,” Luvison said that his purpose was to “share with you some things to help you do better” in the collaborative work of alliances. His research in this area, he said, “started over a couple of beers with a colleague,” leading him to take a survey of the academic literature on collaboration, how it’s defined, and what it means.

Conclusion? The academics are no help at all.

Looking for Something More

Meaning, they haven’t been at all clear in their definitions. But to be fair, neither have ASAP members Luvison previously surveyed, although there was a degree of unanimity in how those present today saw the three concepts in action. They also seemed to agree with Luvison’s contention that collaboration is “something more” than coordination or cooperation, and that they are “three distinct things that have some overlap,” or as he termed it, “shared mechanisms.” These areas of overlap include:

Participants were asked in breakout sessions to discuss ways of building trust, for example, and processes that could be put in place organizationally to promote trust between partners. Similarly, they explored various ways in which coordination, cooperation, and collaboration could all be improved.

The overarching purpose? Training, you might say. Installing better processes and structures to foster collaborative innovation. Or as Luvison put it, “How would you take somebody out of college and train them to be an alliance manager?”

Challenges Aplenty—Even in a “Lovefest”

Challenges of coordination involve enabling people, teams, and organizations to work together when they may be fundamentally different in their cultures and ways of doing things. When coordination goes awry, the culprits may be unclear roles (lack of role clarification), poor planning, or inadequate monitoring. Some participants suggested that a good alliance launch solves these problems—or at least is better than “what launch?”—but one noted that what sometimes ensues is a “lovefest” where “you’re loving each other so much you forget to monitor” what’s happening with roles and responsibilities, deliverables, timelines, etc.

Like a good launch, good planning is also a help but not a panacea. One attendee said that especially in tech, a great plan today could turn out to be “a really stupid plan three years from now” due to the pace of technological and market changes, and another mentioned that plans are typically built on assumptions—but not the assumption that things go wrong. “And things always go wrong.”

Similarly, cooperation challenges may occur due to weak interpersonal relationships, unwillingness to assume reciprocal behaviors, inability to provide or seek help, or lack of alignment on the reasons behind the partnership.

Finally, collaboration itself can be imperiled by an unwillingness to embrace new ideas (especially when put forward by a partner), a psychologically unsafe environment, or the lack of an integrative problem-solving mindset.

After all, said Luvison, “Can we call it a collaboration if we’re not solving problems together? You can call it what you want, but…”

Stones, Storms, and All the Ships at Sea

He concluded by outlining some helpful ideas for improving and enhancing the collaborative process, such as:

“This didn’t come down on tablets of stone,” Luvison acknowledged, but he encouraged invitees to take some of the suggestions and thoughts they heard back to their own organizations and see how they might apply them to their alliances.

At the end of the day, participants in the Leadership Forum also got a special sneak preview of the following day’s plenary address by Mark Denton, “Navigate the Storm: How to Get Ordinary People to Achieve the Extraordinary When the Only Way Out Is Through.” He talked about being skipper on the BT Global Challenge: twelve months sailing “the wrong way around the world” with a crew of “complete rank amateurs” aged 18 to 60, 70 percent of whom had never sailed before. Long days and nights at sea, cramped quarters, rough waters, wind and weather—you get the picture.

Participants brainstormed what kinds of training, rules, agreements, and conversations such a group of neophytes would need to have in the three weeks before the race. And their suggestions and the whole discussion was fascinating, but will be the subject of tomorrow’s plenary—and another blog post! But here’s a hint:

“The key is alignment.” 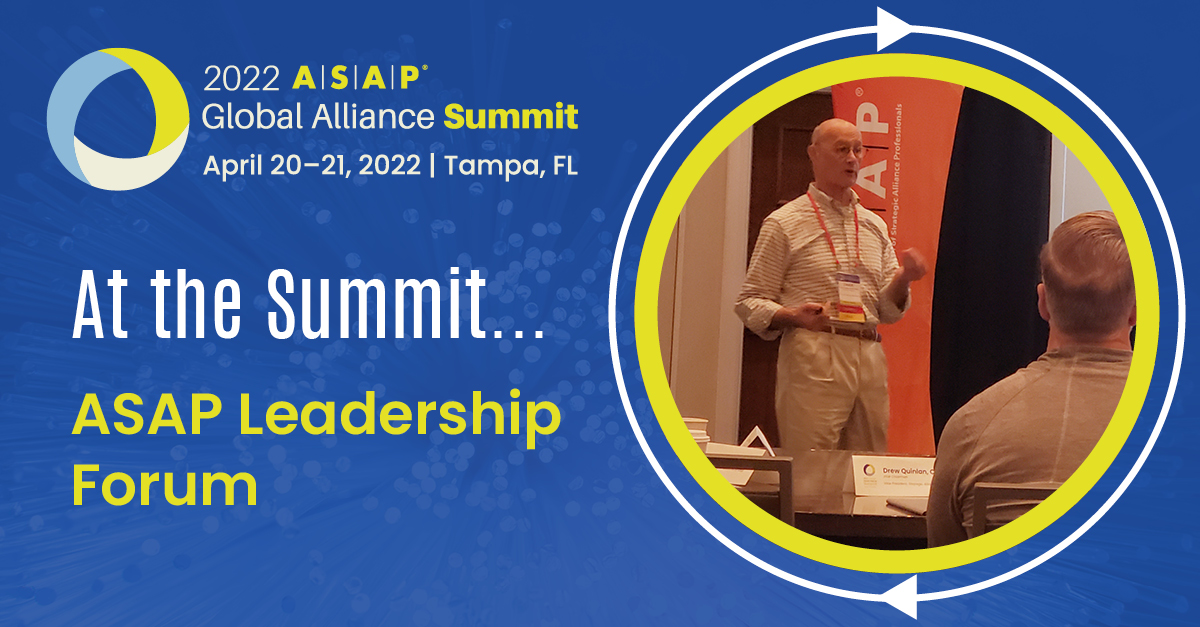