Why Are We Here? Partnering to Make Good Things Happen

Melinda Richter’s journey began very humbly, in a small wooden house with no running water in northern Canada. Growing up in that harsh environment with her parents and seven siblings wasn’t easy, especially in winter. But she was determined, she says: “I was going to change my story.”

That story and its implications rippled through Richter’s day three keynote address at the 2020 ASAP BioPharma Conference, “The Power of Partnership: Driving Innovation for Patients.” And for Richter, now global head of JLABS for Johnson & Johnson Innovation, another key phrase to ponder might be “the power of why.”

A subsequent chapter in her story found Richter living in Beijing and working for a tech company. She was making pretty good money and, as she said, “I thought I had the world by the tail.” Then she was literally “bit by a bug” while walking outdoors and wound up very ill in a Beijing hospital room, where the doctors sadly told her there was nothing they could do for her and she should call her family and say goodbye.

“That changed my life,” she said. She decided that if she lived, she would go to work in healthcare. Somehow she did survive, quit her corporate job, “sold everything,” and went to San Francisco. She was not a scientist but a businessperson, and she thought she might be able to apply some of her tech industry experience to healthcare by identifying problems and coming up with creative solutions.

This is all in a day’s work for tech, but in the life sciences it’s a little more complicated, given that “before you even turn the lights on” you have to have infrastructure, make investments in capital equipment, follow the scientific process, understand the regulations, and then resign yourself to the fact that it may take 8 to 12 years or more to get a drug to market. If you’re an investor, Richter asked, where would you rather put your money—on the next Instagram, or an oncology drug development program?

Yet Richter persisted, raising $6 million initially to open her first facility and dedicating 50 percent of its common space to help incubate and innovate fresh ideas and new science. A few years and about a billion dollars in deals later she found she needed to expand, and secured a meeting with Johnson & Johnson representatives in San Diego where she pitched the wild notion that “if we put our respective strengths together, we could maybe change the scale in life sciences.”

Maybe not so wild, because the result was JLABS, which has grown from its first facility in San Diego to encompass a number of locations in North America, and recently in Europe and China as well. All of these, Richter stressed, are collaborations—public-private partnerships with government entities such as BARDA (the US Biomedical Advanced Research and Development Authority), as well as partnerships with startups, pharma companies, and others.

Getting the Best Solutions to the People

One of the BARDA collaborations is focused on trying to sniff out the next coronavirus-type pandemic. Called “Blue Knight,” its purpose is to “anticipate the next COVID-19 challenge, take the best solutions, and then amplify them out to our global citizens,” Richter explained.

So far, according to Richter, JLABS has done nearly $40 billion worth of deals, amounting to some 150-plus collaborations with 673 companies in its network. What’s more, the organization is 30 percent women-led—vs. 1 percent in the industry—and 29 percent minority-led—vs. 8 percent industry-wide.

Companies apply to JLABS for space, investment connections and opportunities, and coaching that will help them get to the next level and help solve our greatest healthcare problems—aiming at not only more and better treatments, but also better quality of and access to healthcare.

Or as Richter put it, JLABS seeks “to accelerate solutions to patients and make them cheaper, so everyone can have access and everyone can afford it.” Currently this includes working on solutions to the COVID-19 crisis—“If there’s a bigger cause I don’t know about it,” Richter acknowledged.

Why Are You Here? To Walk Through Walls

To do this work, of course, it helps to be passionate about what you do—or as Richter said, to “walk through walls to get it done.” In explaining her mindset, she admitted that when things don’t go well, even today she returns in her memory to that hospital room in Beijing where she wondered whether she was even going to live to see another day. “Then I dust myself off, pick myself up, and get back to work.”

Richter nudged the virtual audience to ask themselves: “Why are you here? Why do you do what you do?” This would seem to have great resonance with our biopharma contingent, who regularly remind themselves and others that the purpose of all their painstaking alliance management effort is ultimately to bring about better outcomes for patients who desperately need that help—thus, Richter said, “fighting for something that’s bigger than you.”

In alliances and partnerships, too, it’s useful to return to these “existential” questions: “What is the purpose that is bigger than ourselves? What are we trying to accomplish together? What can we all do to get over this hump?”

Not that it isn’t frustrating at times. Richter noted that while she and others started as early as two years ago trying to anticipate something like COVID-19, “we were still too late. We haven’t done this well enough.”

Moreover, organizations doing this important work also need to take a hard look at their own composition—specifically their gender and ethnic diversity. “Our leadership teams don’t look enough like our population,” she said, adding that she had to keep revisiting her own organization’s record, challenging her own assumptions, and striving for improvement. “Which ethnic minorities are absent?” she asked. “It’s something we all need to do better. What are we missing?” This is not just about fulfilling arbitrary quotas, she stressed, but about organizations better understanding the needs of the communities and populations they serve.

Finally, in answer to a question during the Q&A portion of the presentation, Richter acknowledged that JLABS—a series of collaborations that now stretches across the globe—began with one conversation, one meeting, one pitch, and one agreement based on trust, honesty, and transparency. It was important for J&J to understand the risks of Richter’s proposal, and for her to answer their concerns, but also for her to be honest that “things can go wrong.”

And as in any alliance, there has to be the faith and trust on both sides that, as Richter articulated it, “We’re going to figure it out and solve things in the moment. That’s a very powerful proposition.” 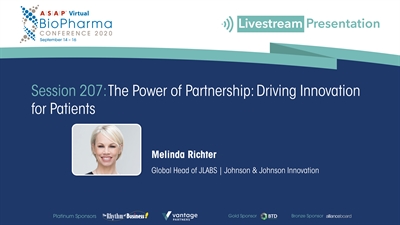