“Humanity Is Relying on You!”

“Humanity Is Relying on You!” Ed Cox Tells BioPharma Conference Attendees to Embrace the Challenge of Ending the Pandemic

Ed Cox, executive vice president of strategic alliances and global head of digital medicine at EVERSANA, was given the task of closing the 2020 ASAP BioPharma Conference on an inspiring note. He did it with a bang!

“Right now, humanity is relying on you. That’s thrilling! I want my work to matter,” he said. “This exact moment, at this exact time, what you do matters more than almost anything else in the world. There are very few occupations on the planet that are more critical to what we are doing [in this world] than what we [as alliance managers] are doing right now [in our jobs]. That’s exciting. You should be proud, you should feel challenged, and you should step up to that challenge.”

Alliance management is indispensable for more reasons than the fact that the world is pinning its hopes on a handful of biopharma industry partnerships working furiously to develop COVID-19 treatments. The alliance management skill set was made to hurdle the obstacles presented to us by the virtual workplace. The nature of pharmaceutical collaborations of this magnitude normally necessitate a level of in-person interaction that is near-impossible at the moment.

Cox explained that the level of complexity of a licensing agreement dwarfs that of any other type of business transaction. If you think about transactions on a four-point spectrum, the easiest ones to consummate are those centered around everyday commodities like sugar or salt, where you don’t need to interact with salespeople any more than to hand over change, let alone trust them. The next-simplest transactions are ones centered around more durable products, such as furniture—more dialogue is needed to hammer out a sale, but a previous relationship is hardly required. Further up the complexity scale are highly technical services, such as software-as-a-service solutions. Although these types of customer agreements tend to last at least a year—often longer—and entail a deeper relationship with the seller, the level of trust required in these relationships pales in comparison to the most complex type of transaction: the pharma licensing agreement, with its arcane regulatory requirements; loads of phase 1, 2, and 3 data; and various IP threats.

“You as the buyer, you as the partner, are relying on the seller to have your best interests in mind. None of those other stages that we talked about have that dynamic,” said Cox. “[The sales rep] has my interest in mind just as much as theirs.”

That’s in normal times. The COVID-19 pandemic has heaped on another layer of complications. Cox said pharma business transactions generally develop over three broad stages: 1) the beginning of a relationship upon the introduction of two parties, 2) the advancement of the conversation, and the 3) actual signing of the agreement. The coronavirus has all but completely quashed the ability to forge the new connections needed in the first stage, while the elaborate private equity and licensing deals that characterize the last one have dropped 50 percent. While alliance managers are primarily responsible for—and currently have their hands full with—that middle phase, the rest of the world cannot walk that last mile to that final stage because closing deals of this nature has also traditionally necessitated in-person interaction.

How else are alliance managers vital today? For one, “Trust has gone from critical to existential,” according to Cox, and few apply trust-building as a science the way alliance professionals do.

“I can advance these deals, close these deals, hold on to these deals, and make them work [without being in person] so that these products get to the patients that [need them] and we get out of this crisis,” Cox explained.

Communicate Value and Ration Negativity to the CEO

Cox was just as insightful in the Q&A that followed his address. ASAP president and CEO Michael Leonetti, CSAP, began by asking Cox how alliance managers can overcome the age-old problem of feeling underappreciated or not fully understood by senior management. Cox urged alliance managers to frame things to CEOs in terms of the future. He acknowledged that alliance managers are inherently disadvantaged because CEOs are more involved in the signing of the deal and the initial press release announcing it, when stock prices are soaring and optimism is high. The partnership is then handed off to the alliance manager only “to make sure it doesn’t break.” From that point on, the alliance manager more often than not only involves the CEO when there is a crisis or a problem with the partner. Cox strongly recommended against shielding yourself behind the rationalization that you are just the messenger.

“The messenger is not a role you want to be in. The fixer, the leader, the driver. That’s the role,” he said. Instead, he urged alliance managers to find ways to create new value, and to involve the CEO when you have a proposal that could result in higher revenue or increased earnings per share.

Obviously, there are some times where alliance managers won’t be able to avoid delivering bad news. However, Cox exhorted listeners to “ration” negativity. Besides, most of the time, the fire isn’t at five-alarm levels that require the CEO’s attention, and it’s almost worse to burn precious CEO time on a false alarm.

“Don’t cry wolf if it’s not [completely] broken,” he said.

When asked what lessons people can take from alliances that didn’t reach their end goal, Cox said that it is important to understand that most alliances fail due to external factors, which goes against human nature and, to some extent, our business culture which insists that we control our own fate. Most of the time, alliance managers cannot overcome market factors, regulatory hurdles, and inadequate science.

“There are great partnerships with really smart people collaborating well that fail because of external factors. There are alliances that are held together with duct tape that succeed because the demand for the product was so great it didn’t matter anyway,” said Cox.

If a failure was avoidable, Cox advised to be “real and authentic” about why the collaboration didn’t reach its goals.

What drives Cox at EVERSANA? He loves the fact that he is in a nascent field—EVERSANA is part of the growing contract commercial organization (CCO) market. Pharmaceutical companies have recently begun outsourcing go-to-market activities in the way they have contracted out manufacturing and research duties over the past two decades. Sometimes EVERSANA is running an entire commercial operation. Other times, the company is managing a single vertical for a large pharmaceutical organization or helping a smaller outfit get to the next level.

EVERSANA is seeking to build the first CCO that can be accessed through partnerships.

Although the 2020 ASAP BioPharma Conference is officially over, registrants can still play back sessions or watch presentations they couldn’t tune in for live at our conference portal. We strongly encourage you to check out the rest of Cox’s session, which includes his take on digital health, when he realized the importance of alliance management, and what he would never do again in a partnership, among other learnings. 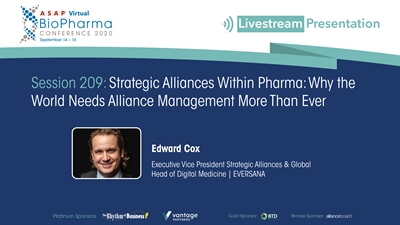 We Can’t Afford “Business as Usual”: Rethinking and Reimagining Alliance Management in the Age of COSeptember 24, 2020 Why Are We Here? Partnering to Make Good Things HappenSeptember 17, 2020