Beyond the Bermuda Triangle: Concrete Measures to Handle the Intangibles That Can Sink an Alliance

After a couple months of negotiations, two pharmaceutical entities put pen to paper on a deal.

“Press releases go out, celebrations ensue, and alignment is perfect—but only for that moment in time,” said Jim Mullen, executive chairman of the board at Editas Medicine.

Over the course of years, a variety of internal and external forces will change the priorities, circumstances, and disposition of the alliance and its participants, including struggles with the science, competitor dynamics, leadership changes, shifts in market landscape, disparity in needed resources and allocated budget, breakdowns in communication and governance, and even just simple misestimates in time frames, to name a few.

Yes, there is a formal structure for dealing with issues that arise in an alliance and sophisticated tricks of the trade that help cope with these forces that set collaborations adrift. However, there are a few tools and practices that can help alliance managers reground partners when their main concerns diverge, and Mullen outlined them during the final session of the 2022 ASAP BioPharma Conference, “Beyond Process and Governance: Critical Factors to Consider in Constructing and Managing Alliances.”

If an alliance is going to handle turbulence, alliance managers need to lay down a sturdy foundation in the contract negotiations and the formative alliance planning stages, a process that includes aligning on that all-important North Star.

“Do both parties actually agree on what success looks like? Had they talked about it explicitly? Because you’ll find that it’s shocking how few times that happens,” said Mullen.

The leaders of each organization need to be deeply engaged in the first stages of the alliance life cycle in order to catch what isn’t explicitly stated in the contract, charter, and initial project plan.

“If two leaders are involved, they are going to understand the context behind all of the tradeoffs that were made in the negotiation,” said Mullen. “That context will be very valuable later.”

You also have to put in a clearly marked emergency exit before takeoff.

“Every one of these alliances needs a prenup. You have to figure out how you’re going to end an alliance before you get into one,” Mullen recommended.

Discord, Rip Cords, and the “Bermuda Triangle of Contract Issues”

As the partnership progresses, discord will pop up in many forms. The first part of resolving these conflicts is only easy on paper.

“Whenever possible, sit down and see if you can get agreement on the facts. This is much harder than it sounds,” said Mullen. “Two different companies will assess the same facts differently. Do you agree on the facts? What is the context of those facts for each company?”

Mullen said the best chance you have at the latter is to “keep it in the family if you can. Meaning, don’t get into mediation, arbitration, or litigation because once you get there, you’ve basically lost control. The thing is probably doomed anyway.” Decision rights, the second part of the trio, are critical in preventing clashes from requiring formal legal measures. Mullen proffered a three-part approach for illuminating who has decision-making authority: “clarify, clarify, clarify.”

Making decisions by consensus would be the most reasonable and fair way to do this, not to mention in the spirit of collaboration, right?

“That’s a horrible way to do it,” said Mullen, before clarifying that decision-by-consensus isn’t necessarily a bad thing—most decisions in an alliance are made that way—it’s just that it won’t work for some of the most critical ones, which can lead to stalls and stalemates “if somebody doesn’t own the ability to say yes.”

Mullen offered an array of sample arrangements for delineating decision-making power. Companies can be assigned the ultimate say in the matter by drug development phase, they can alternate decisions at impasse—Mullen likened this method to college basketball’s rotating possession arrow system—or they can appoint whoever has the most expertise in that particular area as final arbiter, for example. Either way, the process must result in getting these decisions made quickly.

“Where you can’t get perfect clarity, try to make sure there’s a process that can be rapidly executed,” said Mullen. “It can’t go on forever, and ‘ever’ means more than 10 minutes.”

ASAP BioPharma Conference registrants can replay “Beyond Process and Governance: Critical Factors to Consider in Constructing and Managing Alliances” directly from the event app and hear Mullen’s take on why mediation is better than arbitration and litigation if you need to resort to formal legal measures, and why he prefers litigation over arbitration if mediation isn’t an option or is ineffective. You can also hear great real-world examples of his guidance in action from his two-decade-plus career as a biopharma CEO and board chairman. 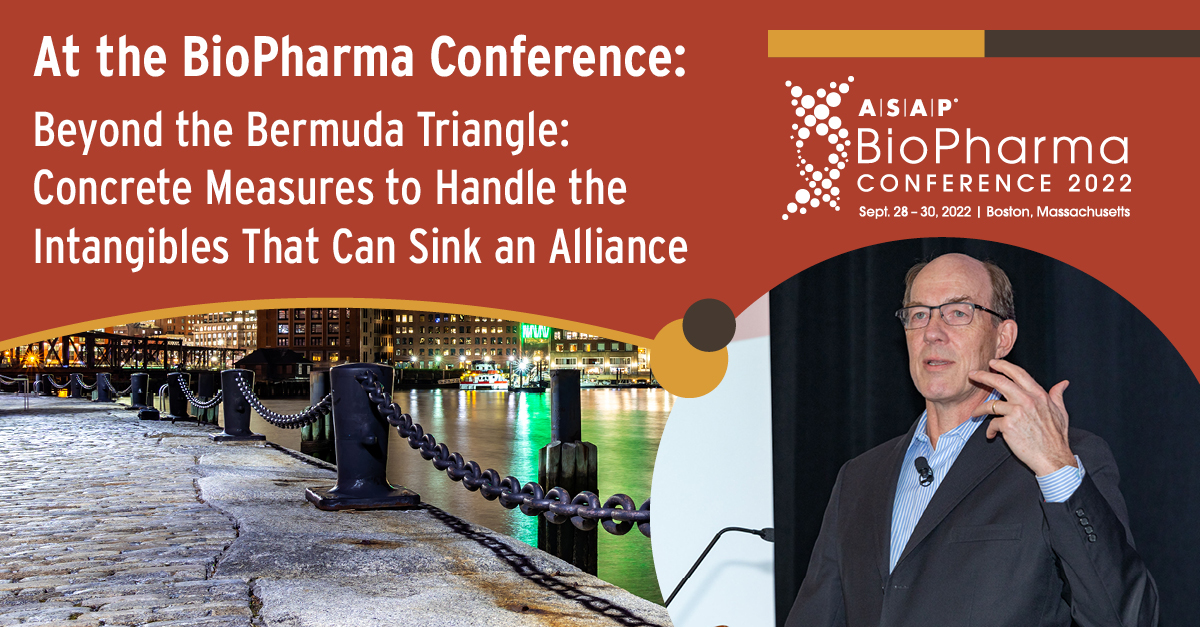