In technology partnering, there’s a lot of discussion—and a lot to learn—about go-to-market partnerships (including more than one session at this Summit). The biopharma version of this is commercial partnerships, a topic that was explored on the first full day of the Summit in a panel called “How Alliance Professionals Deliver Value in Biopharma Commercial Alliances,” moderated by Jan Twombly, CSAP, president of The Rhythm of Business, with panelists Chris Black, executive director and head of corporate alliance management and integration at Merck, and Mary Jo Struttmann, CA-AM, executive director of global alliance management at Astellas.

“When it comes to commercial, a lot of people haven’t had a lot of experience,” Twombly explained. “We’re looking for efficient operating models.”

Lack of operational experience does not apply to these panelists, who provided their insights on how to go to market with a partner, splitting up territories around the world or copromoting in the same territory in order to bring medicines to patients as quickly and efficiently as possible. It can be a delicate dance, and requires all of alliance managers’ entrepreneurial skills to be successful.

No PM, So the AM Becomes a GM

“It’s important to think and act like a virtual general manager,” said Black, describing the commercial partnership as a business unto itself that must be managed and run as such. In addition, unlike research partnerships, a commercial alliance often has no single leader in charge—no project manager, no scientific lead or head of a lab, for example—and can get complicated as it may involve multiple geographies with their own nuances, regulations, and local conditions.

“The alliance manager is the only one who can give you a complete picture across every product and every geography,” Black said.

For her part, Struttmann has significant experience with copromotions—a tricky matter for sales organizations and thus for alliance management. How territories and responsibilities get divvied up is often left out of the alliance agreement, she said, so working with a partner in this way means you have to “calm the fears of your salespeople and make it a positive, not a negative.”

Along with the sales force, alliance management may need to determine who are the key decision makers in various territories and who has the best relationship with each, letting them take the lead. Still, even with a good operating model, a lot of details may go by the wayside if not understood and managed, and nothing is cut and dried.

“You often have to find a third way,” Twombly advised. “And make sure everyone is in the boat with you.”

Black noted that splitting territories up is “a little cleaner” than doing a copromote, but cautioned that every single issue that gets resolved, no matter how innocuous, may be precedent setting—what gets applied in the EU may then become a bone of contention in Latin America, for example, if care is not exercised. The “exception” then becomes the rule.

Simple Alliances? If You Find One Let Us Know

Struttmann said that she has often been involved in the negotiation of commercial agreements—“thank God”—which can avoid some problems cropping up in the future. “Nothing is ever simple in alliances,” she said.

She added that having a common purpose, goal, or North Star is critical in commercial alliances, as in others. But that also may not be so straightforward. The product might be a blockbuster drug, as all agree—but what does it mean to each company, and where does each organization want that product’s sales and market share to be in three to five years?

Once such questions are answered, then any decision can be subjected to the test of “Will this get us to our overarching goal?” Struttmann said.

And here Twombly issued a warning: “Delay is the enemy of alliances—particularly commercial.”

Do the Right Thing, or Be a Fool on the Hill

Black noted that companies’ differing cultures, philosophies, organizational structures, and decision-making styles can all show up in the normal course of guiding a commercial alliance and moving it forward.

According to Black, the dialogue might go something like: “‘Just tell them to do X.’ ‘That’s not the way things work in our company. Everything’s a negotiation.'” Which may lead to: “‘How big a deal is this for your company? Are you going to die on this hill?’”

When such questions come up, both panelists agreed that the answer typically requires doing what’s best for the asset and the partnership, rather than just for one’s own company. In that regard, Struttmann said, open, transparent discussions “have saved us.” Relationships and trust have to be earned, but ideally what results is a “one-team mentality,” where it’s difficult for an outsider to discern which people hail from which company.

Finally, in commercial partnerships, Black said, “You have to be prepared to succeed differently.” (There’s that “third way” again.) There are shorter timelines, a need for quicker decisions, sometimes differing expectations of sales, and varying market conditions around the world—all of which need to be factored into a commercial alliance strategy. And there may be adjustments along the way, and a need to pivot from one product to another as situations change.

"The results show up as dollars,” Black summarized. “And a dollar is a dollar. The P&L doesn’t care which product it came from.” 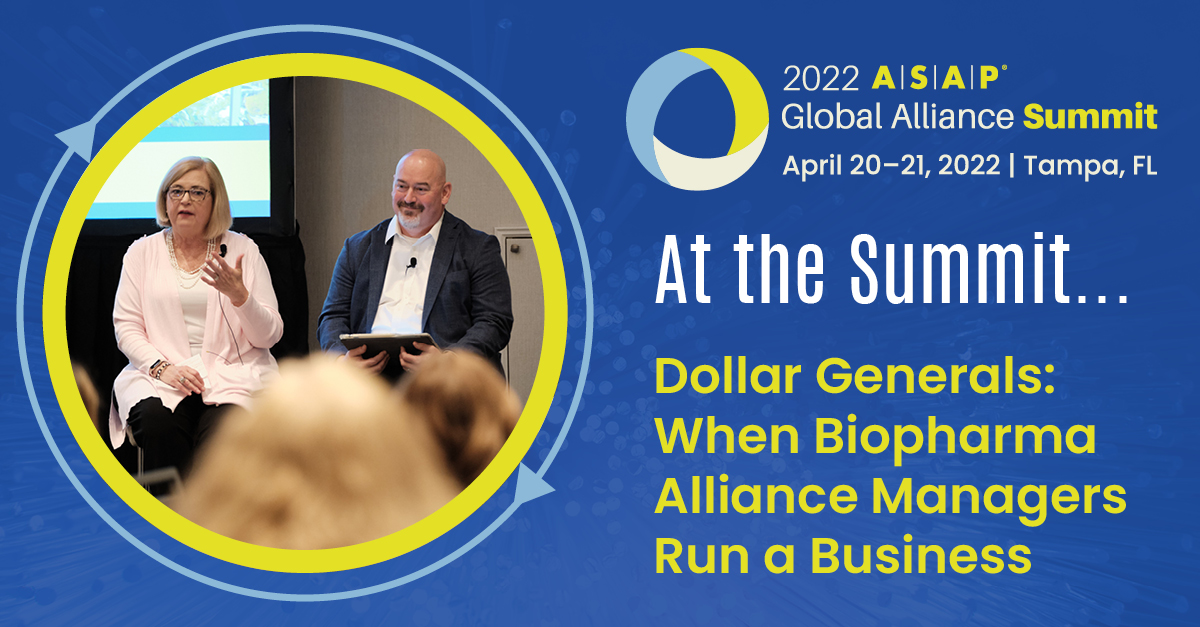