Failure to Launch? Not So. ASAP Roundtable Reveals Positive Sides to Virtual Kickoffs

You’ve agreed to terms with a new partner and signed a formal alliance agreement. Now it’s time to get the collaboration in gear. Whether relying on a formal launch event, established best practices, or informal meetings and documents, alliance leaders recognize the importance of capitalizing on the initial optimism that comes with a new deal to get an alliance off on the right foot. What are the key elements of a successful kickoff? How are alliance management professionals executing them as we emerge from the pandemic? What changes had to be made to accommodate the virtual workplace in the last two years, and which of those innovations will we see become the new normal moving forward, even when the world will be able to travel freely again?

ASAP members from a variety of industries recently touched on all of these questions and more during the association’s latest roundtable, “Getting Off to the Right Start: The Importance of Alliance Kickoffs.”

For the most part, the broad goals of a kickoff event are to onboard the project teams, establish relationships between the partners, and get to know and understand not only the people but the cultures of the respective companies, according to one roundtable participant. Having said that, attendees generally agreed that it makes sense to customize kickoffs, at least to some extent, since no two alliances are alike. Certain proprietary tools can help,  however—multiple attendees from large pharmaceutical companies revealed that they use internally developed processes, templates, and practices—“it doesn’t make sense to standardize everything,” according to one of them. Shorter-term alliances need to focus more sharply on objectives and critical information than the relationship-building common to longer-term engagements, while smaller alliance teams benefit from less formal, more intimate settings than meetings of larger groups.

What do you need to cover? Perhaps most importantly, you must establish the “vision for the partnership” and get executive stakeholders involved, according to one pharma alliance professional in attendance. Another pharma company employee listed the contract, governance structure, and 100-day plan as items to dissect at launch time, and added that the meeting is a success “if everyone adopts joint alliance practices.” Meanwhile another attendee urged alliance managers to review only the “details of contract you want people to remember,” such as the key decisions that need to be made, who makes them, and important milestones.

Breakout sessions appear to be common in kickoff events for large alliances. One attendee felt one-on-one discussions at the senior level were critical—“it’s something that’s easy to overlook in [a] virtual [format]”—but stressed that decisions made in side conversations or separate meetings should and must be communicated back internally among the teams and affected alliance personnel. Another biopharma alliance manager let everyone in the breakout session in on the tactic of arranging meetings of groups of four to six people who need to get to know each other for the longer-term operation of the alliance, and following those sessions up with a second round of smaller-group meetings between people of the participants’ choosing.

A lot goes into preparing for these meetings, too. For example, one contributor meticulously works with legal to make sure that slides in the kickoff presentation deck align with the contract. Another emphasized the importance of testing IT systems and doing a logistics prep session. It may seem basic, but it’s important to ensure that all tablets, laptops, SharePoint and similar portals, projectors, and other devices being used are working properly. But a failure of technology could result in a failure to launch.

“Have it all in place if you want to hit the ground running. We set up a lot of that ahead of Day One,” this participant said.

Virtual Meetings Don’t Have to Be a Drag

Of course, no meeting about live gatherings of any sort could go without deep discussion of the pandemic’s affect. Participants ticked off several predictable challenges with the virtual format: it was hard to keep people engaged amidst email alerts and other distractions, maintain stamina for two-hour meetings on screen, gather people from across up to five time zones, and establish that ineffable chemistry that underpins great working relationships. To the latter point, one attendee cited the virtual format as partially to blame for ongoing “trust issues in sharing data” throughout the life cycle of the alliance.

Even in meetings where everyone is engaged, it has sometimes been unclear among all those faces on the screen “who has the final say in resolving conflicts,” according to another alliance manager in attendance. If the virtual workplace wasn’t enough of an obstacle, the Great Resignation has also been “disruptive to the kickoff process,” according to one attendee, and has forced alliance leaders to reestablish collaborations at various points between the initial launch and later phases.

Having said all of that, several people had positive things to say about the virtual format, with one going as far as to declare that it was hardly “such a drag-down.” Another pointed out that it created a “level playing field” by giving the dozens of people who used to be disadvantaged by having to phone in to in-person kickoff meetings “an equal seat at the table.”

Several pointers for optimizing this environment came up, including:

“A Process, Not an Event”

The virtual meeting isn’t going away anytime soon, in the estimation of several in the group. One biotech alliance leader said she expects her company to adopt a hybrid approach to meetings, with some being in person and other parts being virtual, when her company officially goes back to being in person in April. Buoyed by the significant travel savings over the last two years, a couple of people bet that their companies will set a higher bar for approval of an in-person get-together.

Wherever and however people gather to launch alliances, it was suggested that alliance managers view these meetings as “a process, not an event,” the thinking being that these initiatives involve so much preplanning and affect the day-to-day pursuit of alliance objectives for several months thereafter.

“I wish I had thought of it that way,” remarked one attendee.

For more great knowledge on virtual kickoffs, check out our in-depth feature “Virtual Alliance Kickoffs: How Do They Do It?” in the Q1 2022 Strategic Alliance Quarterly, which hit ASAP members’ inboxes yesterday. 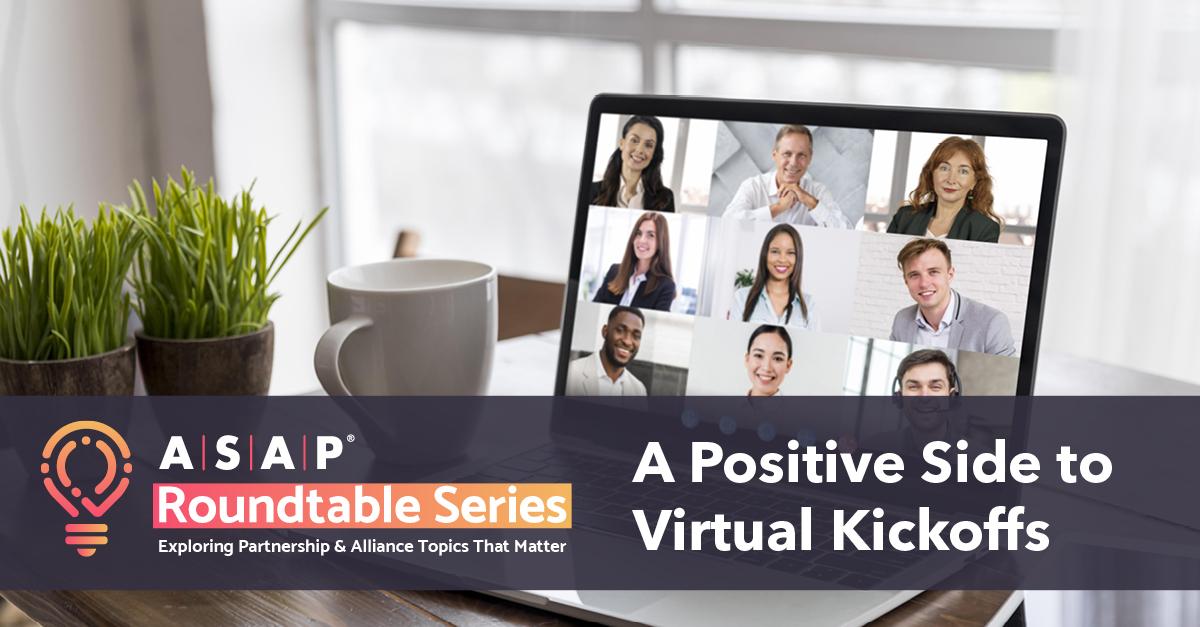 “It’s Up to Us”: How Alliance Professionals Can Solve the Partner Compensation ConundrumMarch 31, 2022 In Search of Excellence: An Alliance Management Top FiveMarch 23, 2022