In Partners We Trust: ASAP Webinar Breaks Down the Importance of Having Faith in Your Collaborators

Spend enough time in ASAP circles or with alliance management veterans who frequently philosophize about the profession and the subject of trust between partners will come up often—at ASAP events or in conversations with partnering professionals.

“You start to hear it and see it everywhere,” said Michael J. Burke, ASAP’s editor in chief and senior editorial consultant.

Analogies, catchphrases, metaphors, and quirky sayings dot these conversations. Someone might say that trust is “what greases the rails,” “the grease on the skids that makes the business a whole lot easier to conduct,” or “the shock absorber that will allow you to move forward through that rough terrain.” You might even hear some variation of Warren Buffett’s famous quote, “Trust is like the air we breathe. When it’s present, nobody really notices; when it’s absent, everybody notices.”

All of these phrases rang in the ears of attendees of ASAP’s latest webinar on the topic, “In Partners We Trust: A Key Element in the Formula for Alliance Success,” in which Burke orchestrated a vibrant discussion with three experienced and accomplished alliance professionals and active ASAP members. This wasn’t the first ASAP exploration of the subject and it almost certainly won’t be the last. Why?

“Trust is the foundation upon which the rest of the business relationship is built. It’s an absolute must [in an alliance],” said Christopher Pogue, senior vice president and head of strategic alliances at Nuix.

Trust Is the First Order of Business

In fact, trust needs to be established at the outset of a relationship—as early as possible.

“If you can start before anything is signed, wonderful,” said Lena Frank, CSAP, vice president of program management at Eisai, while noting that it is important to “have the appropriate introductory discussions, learn about each other rather than jumping feet first into our relationship.”

Anoop Nathwani, director of Consortio Consulting, agreed that “you have to start building trust before signing any type of agreement,” and noted that although the contract is important, alliances are “relationship-based” at their core. Alliance professionals must bridge different organizations, countries, and cultures, but it’s equally important to have a collaborative culture internally in order to build trust with external parties.

“If you don’t have it within your own organization, guess what? You don’t stand a hope in hell of doing that with partners, as well,” said Nathwani.

One-Hit Wonders Ruined in One Second

A lot goes into establishing trust in the early stages of an organizational relationship. Frank recommended doing some early research on the company, holding launch meetings and breaking bread in order to get to know each other and set expectations, and continually asking questions thereafter to ascertain how the other party operates. After all, everyone knows that trust will be tested often throughout the course of a strategic alliance.

“Trust is not a one-hit wonder,” warned Nathwani. “It’s a continuous process. You have to keep working on it all the time. Things will happen that will put trust on a different playing field.”

“It takes a long time to build trust, and it only takes a second to break it,” said Pogue, invoking yet another pithy saying to illustrate trust’s fragility. Mistakes and errors will happen; how a partner responds can erode the reservoir of trust built up over time—and the relationship as a whole. Pogue said honesty, transparency, and accountability in this type of situation maintains and even increases trust. He would much prefer partners own up and immediately ask, “What can we do to make this right?” Conversely, Pogue has also seen partner executives do “mental gymnastics” in efforts to cover up their role in a situation gone bad. “When someone will lie about something small, they’ll lie about something big.”

In Nathwani’s experience, it’s human nature for many to respond to being lied to by reacting in kind moving forward.

“You’ll behave in the same way. You’re actually diverging from what you should be doing, which is coming together,” he said.

Once Bitten, Twice Shy, and a Third Party to Help Handle Excessive Baggage

What are some remedies for fixing broken trust?

Pogue urged webinar participants to “put it on the offender.” He wants to hear the partner say, “‘We’re owning it, stepping up, and we want to make things whole in the relationship again.…’ There’s a path back, but you’re in the driver’s seat. If you want to get us back to a place where we can work together, that’s awesome. You have to rebuild that trust.”

After all, you couldn’t fault the aggrieved party for being “once bitten, twice shy,” in Pogue’s estimation, and if things can’t be worked out, you may just have to remove a toxic individual from partnership affairs.

Frank noted that sometimes the situation calls for more formal, intensive, and expensive measures if the problem is bigger than a single issue, individual, or event. In that case, the partnership could benefit from the involvement of a third-party consultant or independent facilitator.

“Sometimes there’s just too much baggage on both sides to be able to manage it by yourselves. Having that independent individual or company come in and help with it may be the only path forward,” she said.

Alliance health checks, of course, can help diagnose mistrust in the relationship before a major blow-up takes place, but they also can play a role in monitoring the healing process afterward. Nathwani recommended conducting quarterly health checks once a conflict has escalated. Contrary to popular opinion, he said, trust can be measured. Although the variables being quantified can be a bit arbitrary, you can still realize great value by “measuring [them] consistently between yourself and the alliance partner, between your different alliance teams—within the executives as well—and see what direction you move in,” he said. In other words, you know you’re in trouble when you see scores go down, regardless of what components are being evaluated.

According to Nathwani and Pogue, it’s even more crucial to measure trust because it’s a leading indicator of your alliance health, not a lagging indicator.

The Bite Mistrust Takes Is Real; the Notion of True Success in Spite of It Is Imaginary

Burke asked the panelists if alliance success can be achieved without trust. Although they had a slightly different spin, all three essentially said “yes” before issuing qualifiers.

Pogue noted that in many instances, startups and other smaller companies have no choice but to put up with larger partners in “mosquito and elephant” relationships. In those cases, alliance managers should inform senior management up front that these collaborations likely won’t last long due to underlying mistrust.

Frank gave an example of a large biopharma alliance that ultimately delivered a successful product despite lawsuits along the way. However, she exhorted the audience to be cognizant of “the emotional toll on people trying to manage this situation. It takes so much out of people. Should those resources be used otherwise with different companies?” She urged listeners to calculate the risk-benefit ratio of trying to move a broken relationship forward. “Is it worth high turnover, losing top people, putting them through this type of situation for the end result?”

Nathwani first insisted that the notion of a successful alliance without trust is “an imaginary thing,” but then conceded that such a collaboration might achieve “transactional” or “tactical” gains. Still, you can forget accomplishing anything truly great because the relationship dynamics will prevent parties from sharing each other’s strategy, which is necessary if you’re inherently supposed to share risk, rewards, and results in an alliance. “If there’s no trust, you’re not going to get any sharing at all,” he said.

ASAP members will benefit greatly from hearing the whole conversation about trust, and they can do so by retrieving the recording from the ASAP Content Hub. Listen to the webinar before the year is out to hear how Nathwani steered a major partnership at Nokia through serious mistrust-related turbulence a decade ago, and why Frank feels the mission to heal patients can serve as a catalyst in resolving issues between biopharma partners. Frank also outlined why trust sometimes takes a hit due to misunderstandings—of circumstances and people—and how individuals should go about educating partners about their personality quirks and cultural affects in order to mitigate these types of misunderstandings. 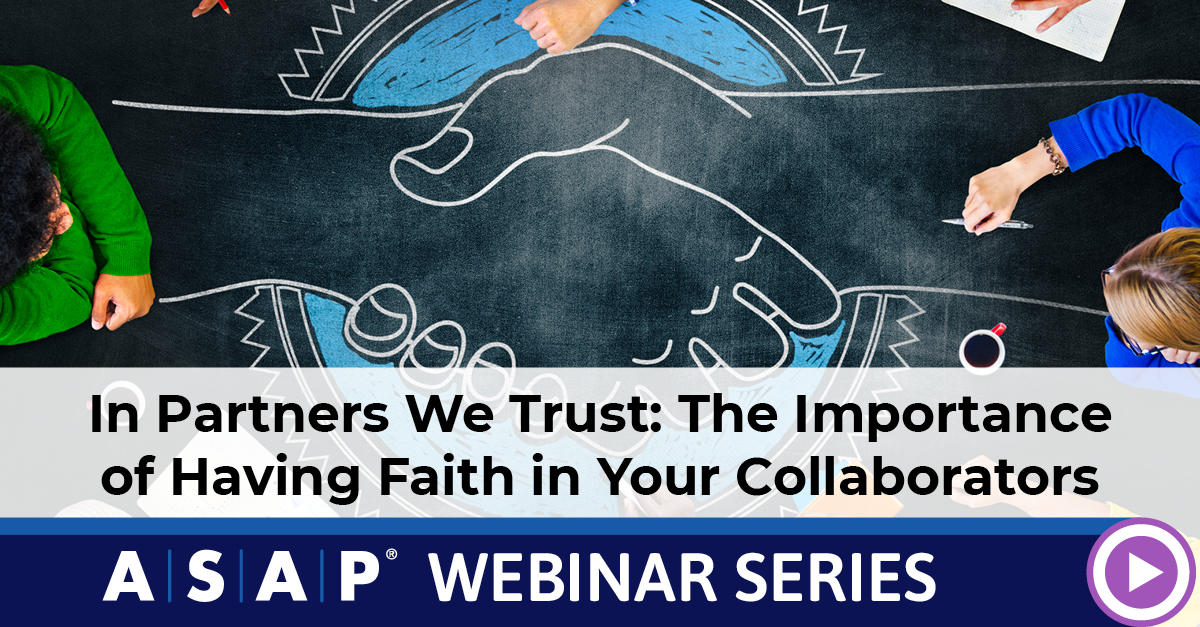