On a Mission: Partnering for a Needle-Free World

Outgoing ASAP board chair Brooke Paige introduced the keynote speaker for day two of the ASAP BioPharma Conference by saying, “I asked a mutual acquaintance to introduce me to the most alliance-centric CEO he knew, and that was Patrick.”

Which is interesting, since Patrick Anquetil, PhD, CEO and cofounder of Portal Instruments, described alliance management as a learning process for him and his company. In “An Alliance-centric Business Model to Foster Innovation in Pharma,” he spoke on the second and final day of the 2021 ASAP BioPharma Conference on both “our lessons learned in alliance management and our business,” and also “this unusual company that we are, with an unusual product, and an unusual business model.”

Portal Instruments is a 40-person startup based in Cambridge, Mass.—“at the heart of biotech in Kendall Square,” according to Anquetil. Its leading product, called PRIME, was described by Anquetil as “a next-generation needle-free injector to revolutionize drug delivery and dramatically improve the patient experience.” He then showed a photo of someone giving themselves a shot—with conventional needle—in the abdomen. Ouch!

“There would be no consumer product that would have any chance of survival if this was the user experience,” he said drily. “It looks about to be painful, and it’s just not great. We thought from the start, ‘We can do better.’”

“We Couldn’t Do It Alone”

But the Portal team needed partners—not just to supply the drugs to go into the device, but to bridge the “knowledge gap” between the more technical device maker and the realm of pharmaceuticals. “We couldn’t do it alone, and that’s how our partner-centric business model came to be,” Anquetil said.

He cited statistics showing that 40–55 percent of chronic patients don’t take their medications, which results in 125,000 US deaths and $100 billion in annual costs. This figure hasn’t changed in 20 years, he noted, despite technical advances. Moreover, fear of needles affects 20–50 percent of adolescents and 20–30 percent of young adults.

Star Trek to the Rescue

So Anquetil, a graduate of MIT, looked to—where else?—Star Trek, which featured a couple of futuristic medical devices, specifically the “hypospray,” which could inject any drug without using a needle, pain free. It turns out that Portal’s PRIME device is actually a real-life simulacrum of that ’60s TV prop.

Anquetil actually demonstrated the device, which employs a prefilled, disposable, single-use cartridge in which the drug is compressed and then expelled in a jet on contact with the skin, at near the speed of sound. It only takes about 10 seconds, he said, with “no sharps, no headaches.”

The device’s digital companion app also helps with patient adherence to treatment regimens: it tracks when an injection happens and sends the information to the cloud, where the data can also be repurposed for various stakeholders (e.g., physicians, pharmacies, pharma companies, payers, and Portal itself).

The challenge of this virtually pain-free, needle-less technology? Price. Cost per injection with a conventional needle is “damn cheap,” admitted Anquetil—around a dollar. “There’s no tech that can actually compete with that.”

But one thing Portal can do is partner: they’ve done deals with companies that include Sanofi, Takeda (on Crohn’s disease and colitis), 3M, and LEO Pharma (on atopic dermatitis).

And to bring their product to market, Portal “decided to become the easiest company to work with,” Anquetil acknowledged. He and his team had a lot to learn about alliance management—both its value and what it actually does—but he sounds like a convert now.

“You are the enablers of innovation,” he said to the BioPharma Conference audience. “Without you, our [business] model actually wouldn’t work at all. You provide the guardrails within the alliance—points of view differ, problems get met, but the alliance doesn’t veer off and end up in the ditch.”

Anquetil also volunteered what Portal learned from partnering with large pharma companies, and “what surprised us”:

“The Most Important Thing”

In the end, Anquetil said, it’s all about working together, fostering trust, leveraging the parties’ differences, and defining success. And it starts with the alignment of values.

“It seems like complete BS that’s put on walls, but actually it’s the most important thing,” he said. “When in doubt, we can always go back to those shared values, talk about what they mean, and talk about what we should do and shouldn’t do.”

As Anquetil shared, it’s mission driven, and he and his team and partners are on a mission to help patients get their medications reliably in a pain-free way.

The ASAP BioPharma Conference for 2021 ended today, but if you registered for the conference you can view all the great keynotes, panels, on-demand sessions, and other presentations on the Attendify app. And keep checking the ASAP Blog for continuing coverage in the days and weeks ahead! 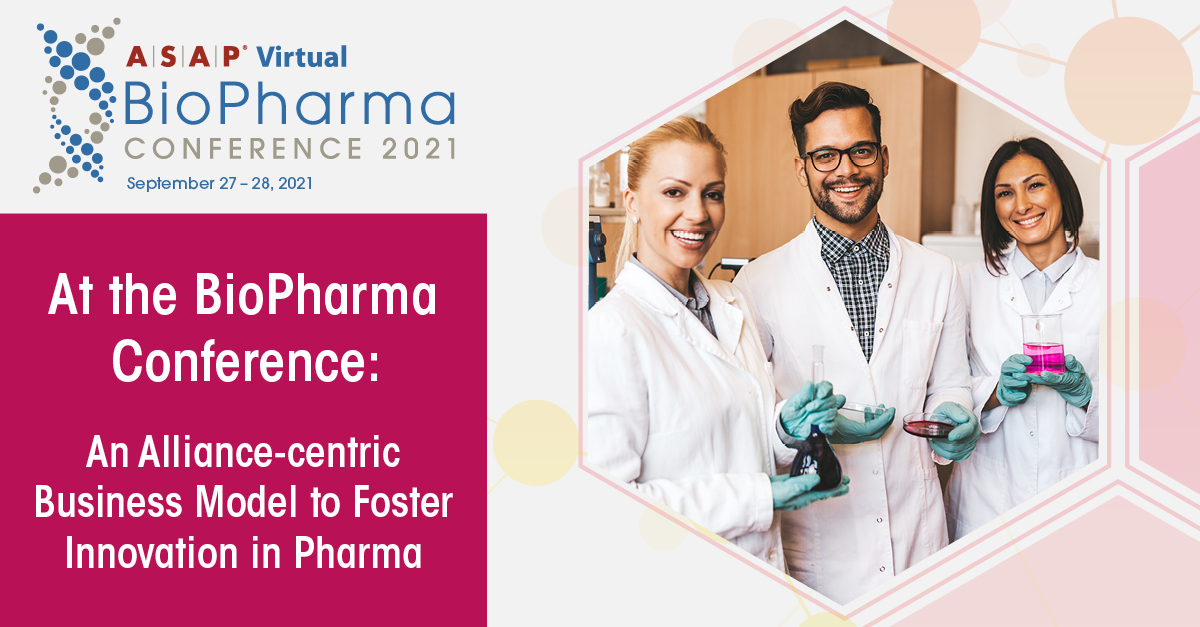