Playbook for an Expanding Ecosystem

Everywhere you look, there’s more partnering, in many different flavors, and more need for a true partnering and alliance mindset in order to manage the profusion of collaborations. That’s applicable to specialty pharma as well—a world of research, technology, and a burgeoning array of startups dependent on visionary—and often finicky—funders.

And on finding the right partners.

That’s the world that Jeff Livingstone inhabits. He’s the CEO of two companies, Igia Pharmaceuticals and LBR Regulatory and Clinical, both operating in the specialty pharma area—and in the case of “fledgling startup” Igia, the pediatric rare and orphan disease space. (Livingstone explained that the companies are entirely separate and independent of each other; the founders of 22-year-old LBR funded Igia as an independent company and are the majority shareholders, but LBR neither runs nor operates Igia and has no say in its business decisions.)

Livingstone will be delivering one of the keynote addresses at the upcoming 2022 ASAP BioPharma Conference, to be held in Boston Sept. 28–30. His address will be titled “Developing a Partnering Playbook for Rare Disease Innovation.”

The Time Is Right for a New Model

He said he’s looking forward to the ASAP BioPharma Conference because of fortuitous timing, and the fact that his area is simply ripe for more partnering.

“I think the ASAP conference is coming at a very good time because, as we know, everything during Covid accelerated,” Livingstone said. “Trends forecasted to arrive in five years appeared in five months! Same thing with business structures and partnerships. And now people are struggling to try to coordinate it all. That’s really difficult.”

In the rare disease and specialty pharma areas, like the biopharma ecosystem generally, activities have also speeded up, and organizations’ roles have morphed and expanded as well. According to Livingstone, there’s been a trend in which both companies and academic institutions, in lieu of simply licensing, have started forming new, independent business units—startups, essentially—to work on cutting-edge research, new technology, and platforms that can create new therapies.

“It’s a relatively new model,” he said, in which “quasi–holding companies” are created, “each containing just one specific technology or invention. This is opposed to the old model of putting everything under one corporate entity. This creates agility in terms of negotiations, partnering, licensing, and M&A. Each piece of technology can be dealt with independently without affecting the rest of the portfolio.”

These companies often operate with a rotating cast of characters, some of whom may also simultaneously work for other entities, leading to groups being firewalled to avoid sharing information among the different companies.

And then there’s the partnering aspect.

“That does change things in terms of partnering,” Livingstone acknowledged. “It used to be when you were a small company looking for a larger company with a long pipeline to partner with, what you were hopeful for was getting in on one project and using that as a partnership to branch out into others. That’s a lot harder now. It’s almost as if you need to run around and talk to all the individual groups. It’s a different dynamic. You can’t be guaranteed just because you have a foot in the door [to be used for other projects].

“The bottom line is, the partnership organization piece and the management of that has become extraordinarily complex. What I see is, especially in my world of specialty pharma, there’s going to be a massive [number] of people needed, people coming out of ASAP, to manage these things. I expect the alliances groups in life sciences to grow dramatically, and I expect tech transfer groups inside these companies to grow dramatically.”

That kind of dramatic growth has contributed to the ever-expanding universe of biopharma partnering—along with an ongoing evolution of the roles performed by the various players: from the pharma companies to the academic institutions to the many startups, service providers, and tech transfer organizations.

“What I’ve seen also is a deeper appreciation among the roles for the other roles,” Livingstone said. “There’s more of a community between these different people.”

Thus, when either of his companies goes out to search for partners, they’re not looking to round up the usual suspects. They need to connect with something more, in Livingstone’s view, than just “the classic BD types” or “the contracts guy.” They need people who understand the nuances of the work and the importance of the different roles involved.

“It’s got to be someone with a much broader canvas,” he said. “It’s not going to work otherwise. That’s the realization we’ve come to.”

Canvassing the Neighborhood Early and Often for Strategic Partners

And that broader canvas is typically to be found in the metaphorical atelier of the alliance and partnering professional. Hence the critical nature of partnering, and of having a partnering playbook.

"From the specialty side, I see young companies wait [until] very late to start thinking about alliances and partnerships,” Livingstone lamented. “It’s not until there’s considered to be a critical need. I think that’s a huge mistake. You have to bake into your startup plan strategic partnerships, and I underscore strategic.

“Make sure you have a partnering plan in place way up front. That’s not just a nice-to-have thing, so don’t wait. Because you’re going to find out that [you’ll] go back to [those partners] again and again, just getting their bead on what’s going on.”

Finally, Livingstone also touted the importance of the alliance management role and its accompanying outlook—“this broadened view, not so transactional”—and the fact that it needs to be elevated in the minds of all those who are looking to do business successfully, whether in specialty pharma or elsewhere, out across the many reaches of the biopharma universe.

“The people who do this kind of work—I don’t think we’re at the top of the speed dial,” he said. “The demands of the industry are that we should be moving up that dial. It also means that the professional organizations should take notice and should involve specialized groups in this more.”

Livingstone will have much more to say on these and other subjects at the 2022 ASAP BioPharma Conference—coming soon! The conference will take place Sept. 28–30 in Boston. For more information and to register, go to asapbiopharma.org 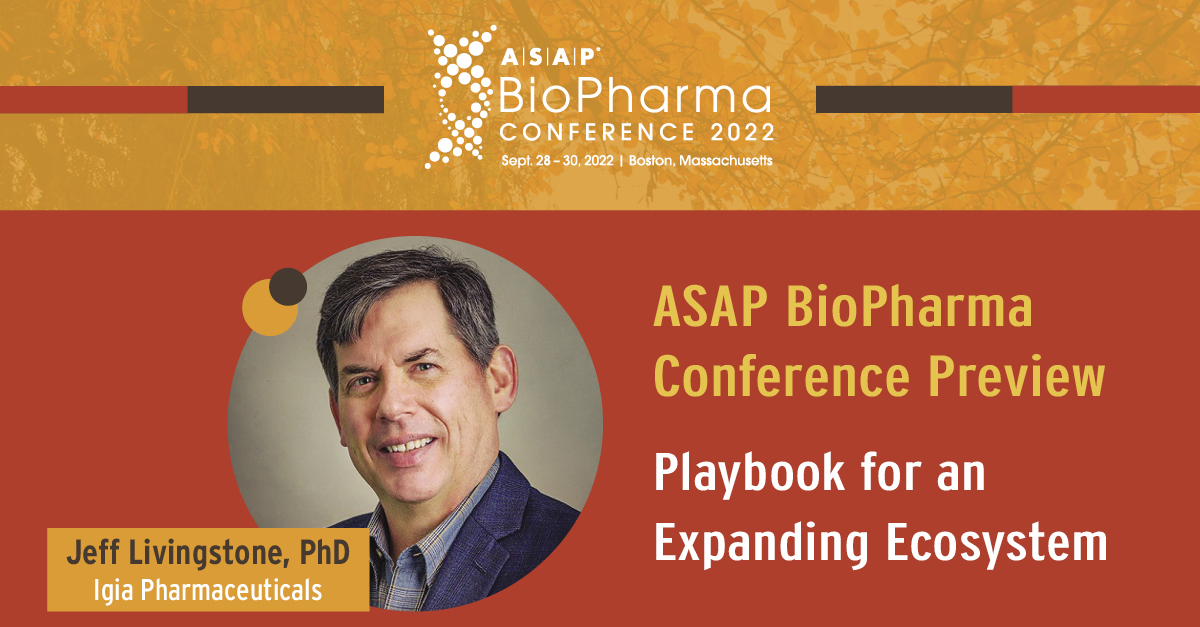 Small Players, Big Deals: How Tech Startups Can Become Better Partners to the Global 500 September 1, 2022 View from the C-Suite: Alliance Management from the Other Side of the DeskAugust 23, 2022