“We Need You to Do This on Behalf of the Nation”: How One Collaboration Constructed the PPP in Days

In March 2020, just a few weeks into a pandemic that roiled our economic and workplace stability, the US federal government enacted the Coronavirus Aid, Relief, and Economic Security (CARES) Act, which, among other things, cleared the way for the advent of the Paycheck Protection Program (PPP) that dispensed forgivable loans to millions of US businesses. It’s probably a safe guess that most entrepreneurs and businesspeople who deposited their PPP checks never had much curiosity about how those payments arrived in their mailboxes. As the 2021 ASAP Global Alliance Summit session “Benefiting Customers Through Collaborative Excellence: A Fireside Chat” revealed, an alliance between two IT consultancies that specialize in government projects worked tirelessly behind the scenes to conduct years’ worth of work in a matter of weeks to help keep American businesses afloat.

ASAP president and CEO Michael Leonetti, CSAP, provided the kindling for this fireside chat by moderating a discussion between the respective C-suite members from the two parties of this alliance: 1) Highlight Technologies and 2) Audley Consulting Group. Panelists Adam McNair, COO of Highlight Technologies, and Jatinder Sehmi, president and CEO of Audley Consulting Group, recalled some highlights and lowlights from their front-row seats on this roller coaster ride of a journey, which started with a late-Friday-night emergency meeting between McNair and his client from the Small Business Administration (SBA) in March 2020.

A Year’s Worth of Work in a Week

The SBA’s directive: hire 500 people to process payroll loans to business owners across the country in a week’s time. Initially taken aback, McNair pushed back for at least another month to get the program off the ground—Highlight Technologies might typically onboard less than half that number of people in a given year—but he changed his tune after receiving a note from another official reading, “‘We need you to do this on behalf of the nation. Can you make this happen?’ It’s just not something you say no to,” he recalled.

To meet “unrealistic expectations” of constructing a program of this type with no direction on wage rates, labor categories, program elements, staff profiles, and work responsibilities in a short time, McNair knew his company couldn’t go it alone, so he enlisted the help of longtime partner Audley Consulting Group. The two companies’ long-standing partnership had already developed a solid foundation based on trust. Each knew they could work with each other to push program elements forward, knowing that obvious blemishes would have to be made over on the fly, and details worked out later in order to meet the compressed timeline.

“We can help each other if we just keep open lines of communication and talk about things at any level,” said Sehmi. “It is very easy with them. It has not been very easy even in other businesses that I’ve run establishing that trust because there are a lot of questions you have—you start questioning certain things. It just wasn’t like that here, and that has always been the case [working with Highlight Technologies].”

Wasted Hours Not a Waste of Time

This trust was especially valuable in the context of the creation of this program, in which all parties were “building the plane as we were flying it,” according to McNair.

“There were a lot of questions,” he said. “There’s a trust factor that we’ll make it right to the extent that we can, but it’s also the acceptance of some risk because there was a possibility that there was going to be some wasted work.”

Indeed, both Highlight Technologies and Audley Consulting Group encountered instances in which they frittered away hours and cycles ramping up for activities that ultimately got shelved.

This trust helped both parties surface issues and handle conflicts constructively. At certain junctures, Sehmi would flag kinks in a process—members of the Audley Consulting Group team were being told two different things by Highlight Technologies employees, or they were getting radio silence on a particular initiative.

“It was identifying gaps in our evolving process for how we were running this program,” said McNair. “Jatinder is trying to communicate to us where things aren’t working. We used a lot of his feedback to hone and fix the process. What was important was, he knew that we were just trying to get the program done, and we were not out to be dishonest with him or cause him problems. We knew that he was just trying to help us get the program delivered.”

Feedback like this ultimately resulted in changes for the better, such as the decision to install a single point of contact at each partner company through which intercompany communication would flow.

Agile Is the New Norm

The agile development processes at the core of both companies’ operations also helped get the PPP up and running quickly. McNair mentioned that Highlight Technologies employees are used to a level of independence and often form teams on their own in order to meet the unique needs of a project.

“We don’t dictate how everybody inside the company does absolutely everything that they do. They have the authority and ability to decide that they need to go work with another part of the organization [if] they need to change how we process something,” he said. “They know what needs to happen.”

Agile processes were already at the core of Sehmi’s organization. As part of a reorganization prior to the pandemic, Sehmi polled 10 of his charges on what they thought they needed to do their jobs, and all 10 included “agile” on their wish list.

“if you weren’t in an agile environment prior to [the pandemic], I think it has now forced you to [it]. Moving forward, this is going to be the new norm,” he said.

McNair and Sehmi shared more about their leadership philosophies and the ideals of their respective companies. Summit attendees can replay this session to hear a discussion of how Highlight Technologies weaves innovation into its collaborations by melding the ISO 44,000 and ISO 56,000 standards, and why both executives think you should prioritize likability highly in the partner selection process. Four other prerecorded presentations and more than a dozen others from the three-day March event are also available in the event portal. But act soon, because the portal is only open until April 30! 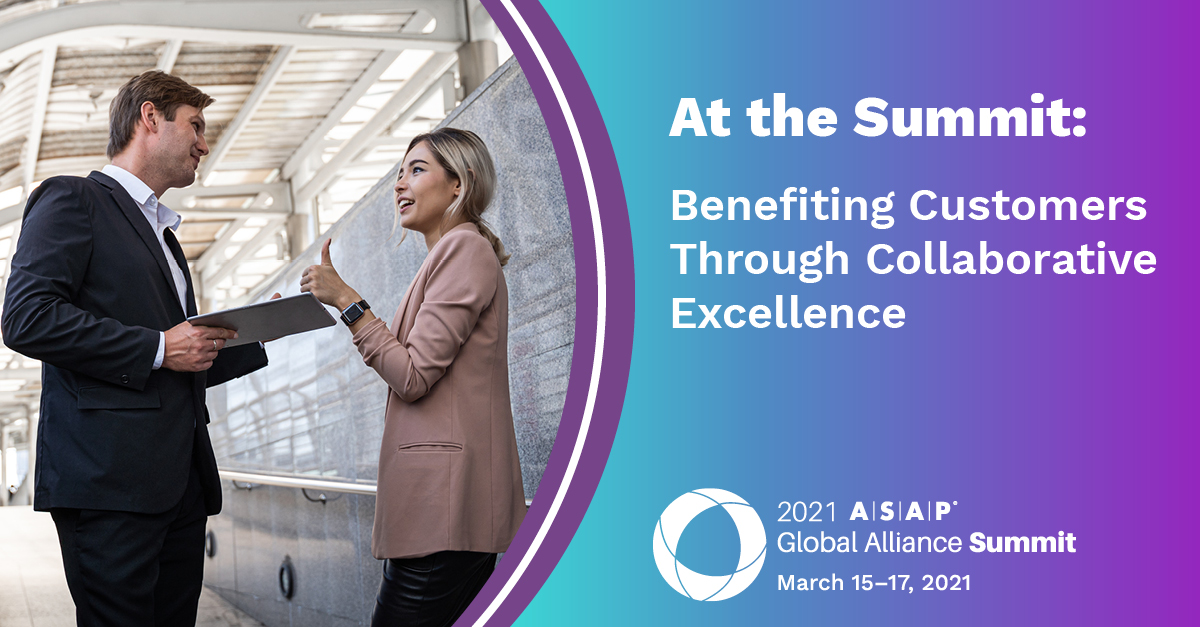 Are You Ready for Liftoff? How to Launch an Alliance That Has the Right StuffApril 5, 2021 Women on the Entrepreneurial—and Partnering—Front LinesMarch 24, 2021