Entrepreneurship: the word conjures images of bold leadership, innovation, risk taking, and cool new startups disrupting markets and changing the world. But the truth can be far less glamorous.

Huge challenges await the new or unwary would-be entrepreneur. And what if the startup founder is a woman? What if she doesn’t come from the business world? What are her experiences trying to raise money for her idea from investors? And what role does partnering play in the birth and growth of a new company?

These were among the questions explored in a panel on day three of the recently concluded 2021 ASAP Global Alliance Summit, held March 15–17. Moderated by Nellie Scott, CA-AM, global channel development manager for global alliances and channels at the SAS Institute, the panel, “Defining Moments from the Entrepreneurial Front Line,” featured “two amazing trailblazers,” as Scott rightly called them.

Rachel Kuperman, MD, is cofounder and CEO of EYSZ Inc., a company that seeks to transform epilepsy care through the use of AI-based software that tracks patients’ eye movements and gathers data on seizures and neurocognitive side effects. Shalini Kasliwal is the founder and CEO of JoinEight, a sourcing intelligence and analytics-driven platform that aims to remedy unconscious bias in job recruiting and hiring.

“There’s Got to Be a Better Way”

Scott introduced the two panelists by commenting that companies are frequently started by visionaries who have the feeling that “there’s got to be a better way, which is often the catalyst for innovation.” That certainly applies to Kuperman, a clinician by training who made the leap into entrepreneurship in order to improve outcomes for epilepsy, treatment of which has not improved greatly over the years, she said.

A worthy goal—but as for leaving medicine and academia to start a company, Kuperman admitted, “I didn’t realize just how complicated it is.”

Kasliwal, for her part, is a serial entrepreneur who’s now on her third company. She’s had her own learning process, and the first time around, she acknowledged that partnerships were not part of the original plan. Now, with JoinEight, “partnerships are in the business plan from day one,” she said.

As partnering and alliance professionals know, there’s a lot of risk involved in bringing two or more organizations together, but openness and trust are required to make partnerships work—even in cases where protection of a company’s intellectual property is paramount and monitoring access to patient data, for example, is a must.

“This is so hard,” Kuperman said. “It’s not just, ‘Take this and go run with it.’ IP is a fundamental challenge.” For her company, that IP is its software—“our magic sauce”—and the data insights it yields.

“If you can’t trust [your partner], you’re not in the right relationship,” Kasliwal added. “When I think about a partnership, it’s kind of like a marriage. You have to come together with some kind of trust. You can’t have the partner walking in with no information.”

Trust, but Verify—and Keep the Lawyers on Call

But while it sounds paradoxical, trust must be accompanied by well-crafted legal agreements and ongoing support from lawyers. It helps when things go wrong—or as Scott said, such measures are “not for the good times, but for the rough times.”

Kuperman stressed the importance of developing a partnering mindset, simultaneously leveraging your core competencies while also benefiting from the partner’s capabilities, in order to “not reinvent the wheel” and “stay light on your feet.” Partnerships can also help validate what a startup is doing—in the best-case scenario, alliances can impress venture capitalists and other investors and help pave a startup’s way forward.

Both panelists saw certain common elements as key to forging and maintaining successful partnerships. For Kasliwal, these are true collaboration (“not a one-way street”), honesty and transparency, trust, and a solid legal agreement.

“Our Goal Is to Help People”

Kuperman said she always had confidence in what she was doing, and prided herself on being able to size up the pros and cons of an idea. But she admitted that in the medical device space, it can be “a long road to revenue.” In addition, “entrepreneurship is a different conversation” and requires different skills.

“I wish I had discovered it earlier,” she said.

Another thorny issue in her field is what she called the “misaligned incentives in the healthcare space.”

“If you can help people and show that you’re helping them, it should be covered,” she said. “That’s the role of the medical system. In the big mess that our medical system is, we sometimes lose the forest for the trees—that our goal is to help people.”

An Ecosystem for Female Entrepreneurs

Finally, both Kuperman and Kasliwal addressed the challenges facing women entrepreneurs. Kuperman noted that while medicine is more “female driven” these days, with greater entrepreneurial support and networking available to women, it’s still the case that women speak differently and are questioned differently by investors when making their pitch.

“There is much to be improved,” she said, “but we’ve also come a long way.”

Kasliwal said that in her earlier entrepreneur days, men often got a better response than women from investors, but there’s definitely been some improvement.

“It’s a very strong ecosystem for female entrepreneurs,” she concluded. “We are together in this journey, and I’m proud to be part of it.”

Summit attendees can still access both livestream and on-demand content from the Summit through the end of April. Use your Attendify app or go to www.asapsummit.org for more information. 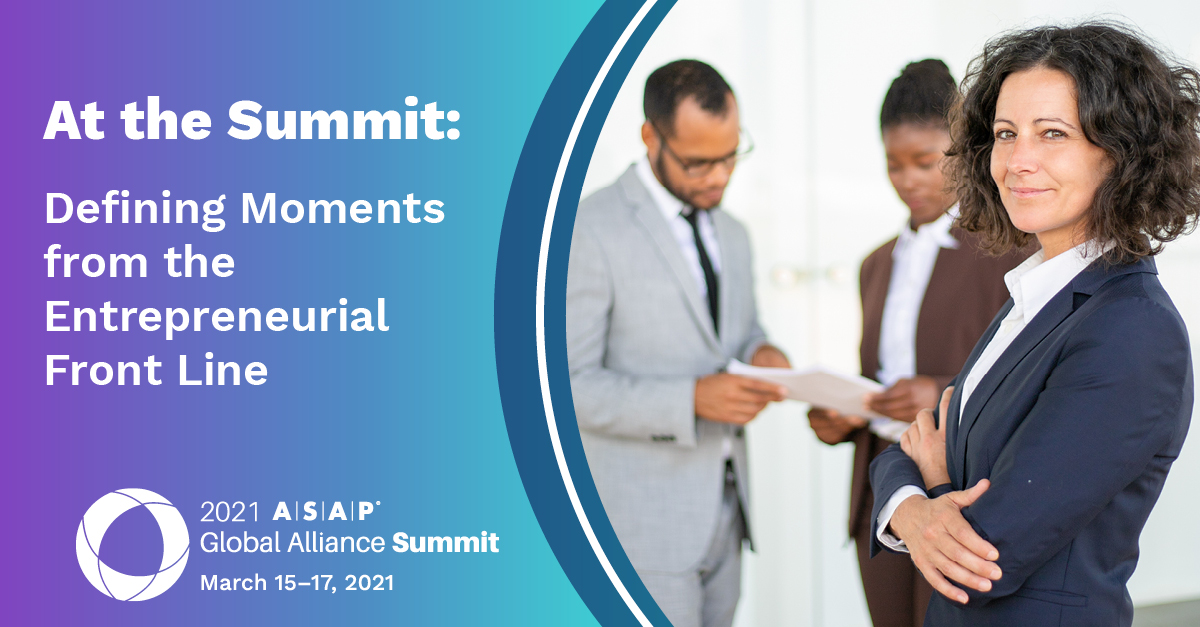 “We Need You to Do This on Behalf of the Nation”: How One Collaboration Constructed the PPP in DaysMarch 24, 2021 Summit Panel: Don’t Underestimate the Importance of Relationship Metrics!March 17, 2021