Are You Ready for Liftoff? How to Launch an Alliance That Has the Right Stuff

One of the highlights and new features of this year’s just-concluded ASAP Global Alliance Summit is the addition of two master classes in alliance management, taught by some of the best of the best in the profession.

On the subject of value, it’s worth noting what a unique opportunity—and bargain—this master class was for attendees. Experienced consultants, practitioners, and longtime influential ASAP thought leaders Twombly and Shuman basically condensed a daylong series of workshops and trainings for clients into a half-hour presentation followed by breakout sessions discussing two alliance case studies (one from biopharma and one from information/digital technology) and a final debrief.

Introducing the two, ASAP president and CEO Michael Leonetti, CSAP, noted that they were tackling something that is “always a big issue” in alliances: how to quickly and efficiently get an alliance up and running, making it operational without slipups, and launching it toward the North Star of intended value from the start.

Easier said than done, as most experienced professionals know. And judging from the quick online survey Twombly and Shuman conducted, experience varies around alliance startup. While more than half of participants had led an alliance startup and more than a quarter participated as team members, just under 20 percent had no experience of it whatsoever.

Referring to a slide showing a green button with the words “Start Right” printed on it, Shuman said, “I know people are always anxious to push that button.”

“But it really is important to understand that when you do push it, you want to make sure you start it the right way,” he said. “Because what winds up happening, at least in the experiences we’ve seen over a couple of decades, is that if you don’t start it right, sooner or later you’ll be back trying to restart it, and that will usually be in a situation where you have some conflict—or worse, where you’ve broken the trust that’s so critical for a relationship to be successful.”

The overarching objective in alliance startup, Twombly and Shuman said, is to align the parties on how the alliance will actually work—on what the North Star goal is and how it will be achieved. They outlined nine elements of that process:

Of course there are differences across industries in how these elements may be addressed. In biopharma, as Shuman noted, it’s common for governance to be led by a joint steering committee, or JSC, which functions as a sort of “board of directors” for the alliance. In tech, governance is more typically carried out via quarterly business reviews with executive sponsors, who must be identified and brought on board.

Either way, Shuman said, you need to engage the appropriate stakeholders “right out of the chute. You want to have the right people on the bus.”

If the essence of alliance management boils down to enhancing value and managing risk, then its value in the startup phase lies in “managing the cost of time,” Shuman said. Or as Twombly added, it means making sure that any inefficiencies inherent in alliances, or potential risks that may arise, don’t get in the way of realizing the alliance’s intended value.

Twombly also emphasized the importance in tech partnering of building out an initial partnership model and then testing its assumptions—the “risk versus reward of the value proposition.” After testing, alliance personnel can move on to the creation of a full business plan and agreement.

“Then, and only then, are you ready to hit the ground running with the formal launch,” Twombly cautioned.

Old and New, Linear and Agile

In biopharma, Shuman noted, there’s been a movement from “old thinking”—deals get done by business development and legal and “thrown over the fence” to alliance management to implement—to “new thinking,” where alliance managers are involved from the term sheet forward. This has also been accompanied in many cases by a shift from “linear” thinking around alliances to more “agile” concepts.

Both Twombly and Shuman highlighted the importance of the kickoff meeting, which some companies may wish to shortcut, but in this age of virtual meetings there’s really no excuse, as Shuman said.

“In the days when people used to fly and get together for these face-to-face kickoffs, [some companies were] reluctant to spend whatever it is to get everybody there who needs to be there. But to balance that, what is the cost of a failed relationship?”

In the end, as Twombly noted, you’re far better off starting your alliance off right, with everything—and everyone—that’s needed in place and all the risks, responsibilities, and contingencies thought out, tested, and planned for as much as possible.

Otherwise, you run the risk of the dreaded “failure to launch,” alliance version.

ASAP Global Alliance Summit registered attendees can still access Summit master classes and all the other livestream content, as well as on-demand sessions, on their Attendify app through April 30. Go to www.asapsummit.org for more information. 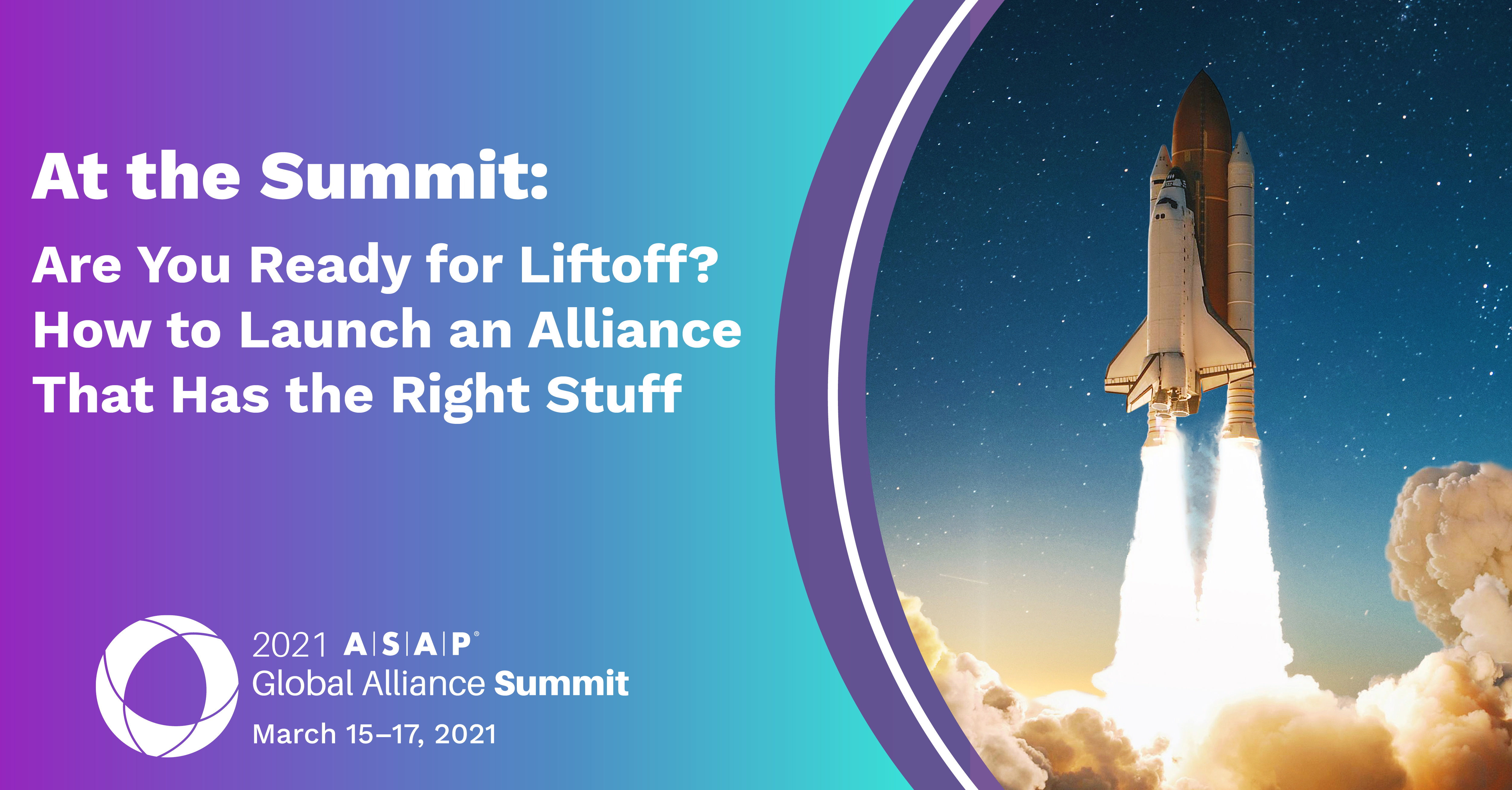 Global Alliance Summit Master Class Helps Construct Your Best-Laid PlansApril 6, 2021 “We Need You to Do This on Behalf of the Nation”: How One Collaboration Constructed the PPP in DaysMarch 24, 2021