The alliance management profession’s ring of legends just got a little bigger. On Tuesday, ASAP announced the winners of the 2020 ASAP Alliance Excellence Awards toward the end of the first day of this year’s ASAP Global Alliance Summit. The new crop of “alliance champions” exemplified the best uses of the discipline’s tried-and-true methodologies and achieved powerful results on behalf of their organizations.

Here are the public and private institutions that earned the alliance management profession’s most prestigious honor.

A little more than two years ago, Cancer Research UK, a nonprofit scientific research organization with the ambitious mission of curing three out of four cancer cases by the year 2034, was looking to advance its R&D efforts around the use of a process called mRNA translation to develop potential cures for cancer. The organization had extensive connections to clinicians from prominent academic institutions who were sitting on promising research in this area. All Cancer Research UK needed was a like-minded partner from the private sector to power this research with funding and drug-development resources.

In stepped biotech Celgene, which would eventually be acquired by Bristol-Myers Squibb in 2019, to help turn these ideas into viable cancer-treating candidates. Together, Celgene and Cancer Research UK erected a novel process that enabled scientists to seamlessly and expeditiously transition from preclinical activities to phase 1 trials through a single funding mechanism. By orchestrating stakeholders from the nonprofit, academic, and private sectors in an innovative alliance structure, this collaboration has produced nine active cancer-therapy targets and laid the foundation for the discovery of many more.

In 2018, an alliance between French pharmaceutical corporation Ipsen and biotech Debiopharm was at a crossroads. Their collaboration around the drug Decapeptyl was an astounding 35 years old. Annual sales of Decapeptyl had grown to $350 million, and the drug, which was originally developed to treat prostate cancer, was now being prescribed for five indications.

However, all wasn’t necessarily peachy in paradise. The two organizations were working with an outmoded alliance structure, and the employees driving the partnership seemed to treat it as a supplier/distributor relationship rather than a true collaboration. The companies still believed in the alliance and signed a 15-year extension, but it would need a major overhaul if it wanted to be competitive over the next decade and a half.

After signing the extension, the two organizations realigned financial models and revamped many aspects of their R&D and life cycle management operations. As a result, the partners are producing new formulations of Decapeptyl and are in better position to sell the drug in developing markets, such as China, and other regions that previously weren’t viable.

Cancer Research UK, the world’s largest independent funder of medical research and the backer of more than £450 million of academic research annually, is one of the few nonprofit organizations with a large portfolio of strategic alliances, which is why it became one of the rare charity organizations to found a formal alliance management practice in 2018. Over the course of the last decade, the company signed 10 deals with large pharmaceutical companies, and saw several of those expand in scope over time.

The company recruited experienced alliance managers to staff the new division, and incorporated formal alliance management best practices in all phases of the life cycle, including health checks, charters, and risk maps. It also disseminated toolkits, tutorials, and other how-to information to personnel outside of the alliance management function who were regularly involved in its collaborations.

“We’ve spent the last two years building a brand-new alliance management function, and we have also really enjoyed becoming active members of the ASAP community as part of that,” said Laura Fletcher, associate director for partnerships and strategic alliances at Cancer Research UK, in a video recorded for the virtual award ceremony.

The practice now manages 38 active projects, 11 of which have been added to its portfolio since April 2019. Cancer Research UK’s alliance managers are often called upon to weave together a diverse range of players that at times include academic scientists, funding managers, pharmaceutical and biotech R&D personnel, institute technology transfer offices (TTOs), and its own employees.

For more than a decade, Merck KGaA, Darmstadt, Germany, has used an internally developed health check to uncover potential vulnerabilities in its strategic alliances. It started with a survey of 18 of its external partners in 2008, and has been expanded to include a quarterly polling of its own alliance managers on four aspects of the company’s partnerships: 1) effective decision making, 2) joint objective fulfillment, 3) alliance opportunities identified, and 4) value creation.

By combining this internal tracking data with feedback from partners on alliance governance and operations via a survey conducted every two years, Merck KGaA is able to identify alliances that need improvement in a very objective, open, and effective manner. Alliance teams launch in-depth investigations when an internal KPI ever dips below the average of the previous four quarters, while the partner surveys have revealed that the Merck KGaA alliance team improved its decision-making efficiency 27 percent overall in a two-year span in the estimation of its partner counterparts, among other insights.

First, the company was recognized for its Request for Strategic Alliances Engagement (RFSA) process, which helped streamline the numerous requests for interoperability or integration of its technology that come from Citrix technology partners and its own employees.

At the heart of the RFSA process is the Strategic Alliances Strategy Committee (SASC), which features representatives from alliance management, product management, engineering, marketing, and sales. The SASC decides whether to give the green light to integrate Citrix technology with another product or service, and how to do so when partner requests are approved.

The RFSA process has earned the respect of Citrix’s product management department, which has provided sponsorship and effective leadership for key alliance initiatives—the company’s chief product officer mandated that a project manager be assigned to each and every technology request. It has also increased the visibility of key alliance initiatives across Citrix’s other divisions. By highlighting the ideas that have originated from Citrix partnerships, the RFSA process has validated the alliance management practice to the rest of the company.

“We ended up having an advocate outside of alliances helping us sponsor, drive, resource, and deliver our key alliance initiatives,” said Steve Blacklock, CA-AM, vice president of global strategic alliances at Citrix, in a statement presented to attendees of the virtual session.

Meanwhile, Citrix was also recognized for developing a way to handle sudden coopetition that results when a partner is acquired by a competitor, a common occurrence in the technology industry. Does Citrix remain partners and agree to cooperate in some areas while competing in others? Should the company walk away altogether and find new partners in the same technology area? In recent years, Citrix was confronted with these questions when competitors acquired two of its partners. It realized then that it would benefit from a formalized process for answering them.

Now, when a competitor acquires an ally, a “war room” of experts conduct a SWOT (strengths, weaknesses, opportunities, and threats) analysis of the situation and follow a blueprint for creating and executing a strategy to transition from partner to competitor. Thanks to these efforts, alliance managers now have tools and best practices around gaining consensus, overcoming internal and external obstacles, and assessing and responding to scenarios as they occur.

When Protiviti, a consulting firm that solves pressing business problems on behalf of 4,500 clients, including 35 percent of the Fortune 500, launched its “i on Hunger” program in November 2014, it had grand ambitions—deliver one million meals to people in need within a year—not to mention the management consulting acumen and financial resources to make this goal a reality. It also had the self-awareness to know what it was missing: domain expertise in getting meals to hungry mouths.

Protiviti enlisted two nonprofits that flashed glittering résumés in tackling world hunger: 1) Feeding Children Everywhere (FCE) and 2) Rise Against Hunger (RAH). The formula the partners settled on was straightforward: FCE and RAH gathered, packaged, and distributed the food to those in need, while Protiviti funded the ingredients, packaging, and location costs for each event.

The program proved to be a smashing success out of the gate—i on Hunger served its 1 millionth meal in less than ten months—and never slowed down. As the program gained steam, it gained allies, too. More nonprofits stepped in to deliver meals, while employees of 348 of Protiviti’s clients also joined the effort as volunteers and joint organizers.

By the end of 2019, 10 million meals had been delivered over the course of 625 i on Hunger events conducted in 26 countries.

“Thank you for this amazing award recognition. We are honored to be chosen for the Alliance Excellence Award in the category of social responsibility,” said Claudia Kuzma, CA-AM, managing director and global ecosystem program leader at Protiviti, to the virtual audience.

There’s so much more to learn from these amazing use cases of this year’s best in alliance management. That’s why you won’t want to miss the full stories of our winners in the Q3 2020 issue of Strategic Alliance Quarterly, which will arrive in ASAP members’ mailboxes later this summer. 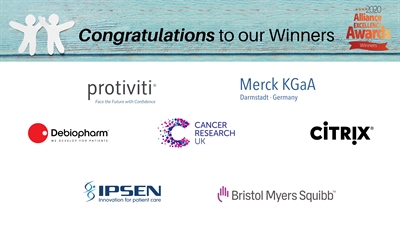 Riding the Roller Coaster in a Long-standing AllianceJune 25, 2020 ASAP’s Summit Kicks Off with Partnering as a Path to Growth, Even—or Especially—in a PandemicJune 24, 2020