For all the talk of David-Goliath alliances between Big Pharma and smaller biotechs, academic institutions, and startups, it’s always good to remind the biopharma alliance management universe that large pharmaceutical corporations also continue to collaborate with each other on potential market-moving drugs. These alliances operate on a massive scale, with alliance networks managing multibillion-dollar initiatives that involve thousands of employees.

Rader and three of her Merck colleagues formed a panel at this year’s ASAP BioPharma Conference titled “From Alliance Managers to Alliance Teams: Adapting Alliance Management in Mega Collaborations,” which outlined the challenges in maintaining these enormous ventures and some tools that can help overcome them.

Stand In for Me: Functional Teams Operate in Alliance Managers’ Stead

Merck’s “mega collaborations” rely on more than 20 committees to make decisions at all phases of the drug development life cycle. At least one of them requires a SharePoint site, to which more than 2,000 people have access. Important decisions pertaining to blockbuster products go through a winding line of committees, subcommittees, development teams, and working teams, and they are scrutinized by the highest levels of management.

Executing these large-scale programs is not a job for a control freak. The sheer size and scope of these alliances precludes any one alliance manager from being able to sit in on all meetings pertaining to the partnership. “Working groups” of executives in functional groups in both companies often advance critical initiatives on their own—manufacturing alone has 20 functions, including quality, regulatory, and clinical supply, to name just three. The first challenge for the broader alliance management team is to answer, “How do we bring those teams together and really empower those people who are not alliance management professionals to sit on those governance bodies and make the strategic decisions for the alliance?” according to Rader.

On the commercial side of things, Merck has more than 25 copromotion agreements spread across two partnerships, according to Ken Marran, CA-AM, director of oncology strategic alliances at Merck, which is about five to eight times more than you might see in a typical alliance, depending on who you’re asking. Commercial plans account for multiple billions of dollars of revenue and expenses that impact the budgets of both companies. Conflicts can arise on many fronts. Marran said the confrontation between Ukraine and Russia could force a tough conversation related to copromotion plans in that region.

Information Management: A Critical, if Not “Joyous,” Job

Information management is a challenge in and of itself on the commercial side of the house. Marran talked about Merck’s “forward-looking statement” slide, which spells out what information can be shared and who is authorized to speak to external parties about a joint drug initiative. A searchable centralized database that records all decisions made in an alliance with a link to corresponding source documents helps protect all parties from a compliance standpoint over the long haul—internal auditors can confirm that appropriate decision makers are making the calls on key issues, even years after the fact.

He also urged alliance managers involved in these collaborations to think through the workings of the technology platforms that will be used to share information. Merck instituted single sign-on functionality for its aforementioned externally facing SharePoint site, to which partners can also connect. But be careful to actively maintain access control; anyone from either company requesting the keys to the portal must be vetted, and controls should be in place to automatically deactivate credentials of employees who leave the respective allied organizations.

“It’s not one of the most joyous parts of the job, but it’s something you need to do as an alliance manager,” said Marran, who added that the task of managing access request forms has grown in scope to a point where he has had to farm it out to someone in IT.

Ryan Lenox, CA-AM, research laboratories alliance manager at Merck, offered some unique challenges in the development phase that arise due to coopetition—the pharmaceutical giants are almost always competing on other fronts. Lenox offered “health technology assessments,” which outline what data can be shared, as an example of “a complex area where we spend a long time just working that out with our partner companies.” These companies may also have other targets of their own in the same disease area that the two Big Pharma companies are tackling together. The organizations may need to gate information pertaining to the collaboration.

“Do you need to set up a firewall? If you do, you want to try to distill that down to the least common denominator, working in these mega collaborations. You’re just protecting what needs to be protected. You’re not, for instance, firewalling an entire department or a whole team,” said Lenox.

Also, since competition laws vary greatly from region to region, Big Pharma companies often find that certain parts of their contract are rendered null and void by a particular country’s stricter antitrust laws.

“You can’t contractualize your way out of a competition law issue. The law is the law. It doesn’t matter if you agreed contractually with your partner,” said Chris Black, CA-AM, head of corporate alliance management and integration at Merck, who moderated the panel discussion. “Are you asking if contractually we’re allowed to do that, or are you asking if legally we’re allowed to do that? Because those are different answers.”

This Is How We Do It

Lenox also endorsed using two documents to operationalize a mega collaboration of this type: 1) a team charter and 2) a “ways of working document.” Re: the former, Lenox said, “It’s not necessarily the paper that it gets put down on, but it’s the thought that goes into, ‘Why are we here? Why does this subteam and subcommittee exist? What are we trying to do? What are we going do at this meeting? Are we going to kick around ideas? Are we going to hear presentations from the working team?’”

The ”ways of working” document outlines things like, “In the development space, how are you going to create a protocol between two companies and get it reviewed? Investigator meetings in the development space: how are we going to approach them? When we go to agency interactions, how are those going to work? Preparation of regulatory documents, all of those ways of working, how are we going operate together?” Lenox summarized.

ASAP BioPharma Conference registrants can still replay “From Alliance Managers to Alliance Teams: Adapting Alliance Management in Mega Collaborations” from the event app. Hear how Black thinks the team charter and “ways of working” document prevent newly appointed senior executives from imposing their will on alliance teams and operations, what in Marran’s view can help with onboarding, and why team charters became a “bad word” within Merck, according to Lenox. 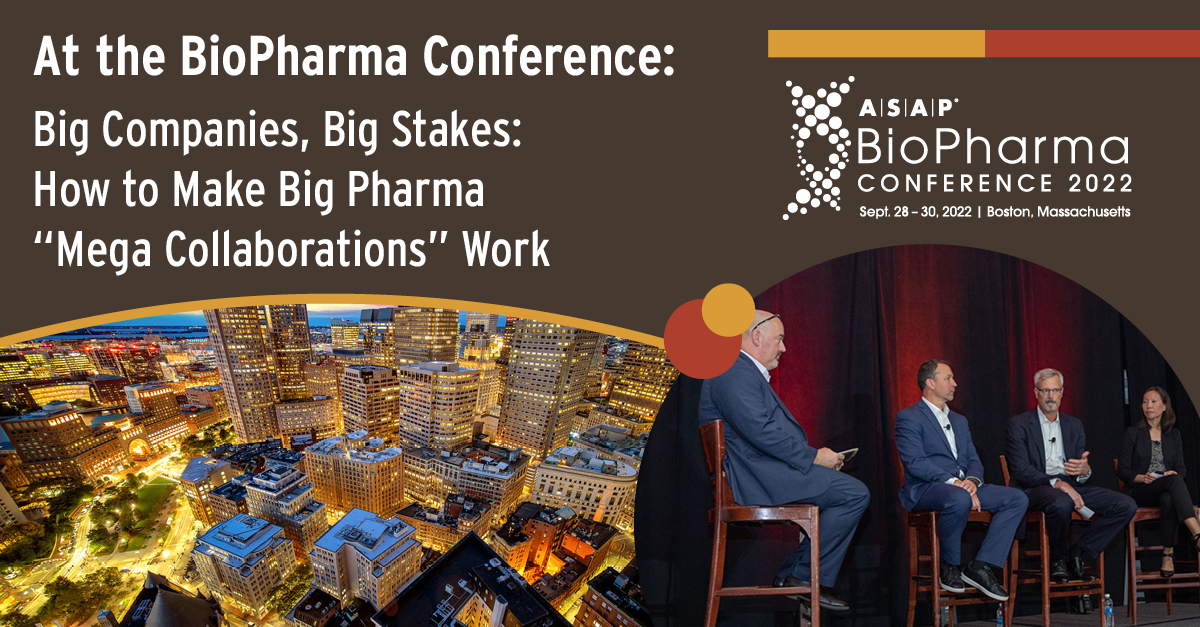