Groundbreaking medical treatments come in many forms. The average person is likely to associate the pharmaceutical industry’s role in healing with prescription and over-the-counter drugs. While the pills, capsules, tablets, and liquids they manufacture are undoubtedly critical in fighting illnesses, biopharma companies also invest substantial resources in groundbreaking methods of delivering therapies—also known as drug modalities—in addition to substances. Big and small pharma companies and biotechs are collaborating on novel ways of healing ailments that have bedeviled the medical community, such as gene editing, gene therapy, cellular therapy, and messenger RNA (mRNA) therapeutics.

Of course, no organization can deliver this type of complex, next-generation medical care alone. The 2020 ASAP BioPharma Conference convened a panel titled “Making a Positive Impact on New Drug Modality Alliances,” in which moderator Mai-Tal Kennedy, engagement leader at Vantage Partners, facilitated a discussion with executives who currently orchestrate alliances around innovations of this ilk about the common challenges and opportunities that surface at all phases of the alliance and drug life cycles.

Anatomy of a Modality Deal: Knowledge for Innovation

Why do organizations enter into these alliances? Petra Sansom, CA-AM, PhD, vice president of alliance management at Voyager Therapeutics, said the motivation for the company holding a patent on a potentially game-changing modality is fairly straightforward.

“The strategic driver is looking to maximize the opportunity for the platform,” she said.

Sansom, whose career has included stops at Roche and subsidiaries of Sanofi, now executes alliances that are aimed at advancing Voyager’s innovations in adeno-associated virus (AAV) vector gene therapy, which is being used to fight several diseases, including Parkinson’s and Huntington’s, among many others. She said companies like Voyager often turn to older pharmaceutical companies for their expertise in certain disease areas, or for capabilities in later clinical and commercialization stages of the drug life cycle. For example, Voyager partnered with Neurocrine to get access to its late-stage Parkinson’s programs. The established company, in turn, gets to diversify its revenue streams.

“Generally, for the nonplatform partner, often the strategic driver is to move into a new therapeutic modality space,” said Sansom.

Jay Vora, director of product development and management at Sangamo Therapeutics, said larger companies “have deep relationships in the disease areas in which they are working, either through commercialized products or through late-stage development relationships with investigators, patient advocates, unique parts of regulators, or payers in different geographies. Smaller companies can leverage that complementarity and come to the table with something new and different that traditional modalities, like small molecules and antibodies, may not have been able to solve, to date.”

Sangamo is actively engaged in a wide variety of gene therapy, gene editing, and gene regulation partnerships, from a late-stage hemophilia collaboration with Pfizer to a gene-edited cell therapy alliance with Sanofi that tackles sickle cell disease to preclinical alliances with Novartis, Takeda, and Pfizer.

The Highest Bidder May Leave You in the Dark

Vin Sharma, vice president and head of alliance leadership at Alnylam Pharmaceuticals, urged the holders of novel modalities to recognize and leverage the position of relative strength that their innovations provide, and to evaluate partners based on their broader value proposition rather than choosing the highest bidder by default. Sharma has had a hand in building Alnylam’s alliance function, which has lined up Genzyme, Vertex, and several other organizations to help advance its RNA interference (RNAi) science, a process of inhibiting gene expression or translation.

“It’s so important not to pick the one that is just the highest investment. It’s not the ones that are willing to put in the most amount of money per target,” he said. Sharma would prioritize potential allies that demonstrate a greater commitment beyond monetary resources and a willingness to “see it through, even through the dark days.”

Initial success with a drug modality partner usually leads to an expansion of the alliance. Sharma warned viewers that newer targets introduced into the growing collaboration could be more complex than the initial assets, which likely came with at least a partially validated and clearly defined research path. In other words, once the organizations get comfortable working with each other and familiar with the counterpart’s expertise, they are emboldened to take on unnamed targets underpinned by still-developing science.

“That first one or two targets tend to be well structured, well defined, everybody knows their roles and responsibilities, and for the follow-on, it tends to be more vague and open,” said Sharma.

The challenge with ambiguous deals: “keeping the IP clean,” asserted Sharma. Some may require silos in certain parts of the organization, others might have different data-handling mandates.

Blinded Me with Science Jargon

Kennedy asked the panel about the nuances that come with launching a diverse portfolio of initiatives, each of which are structured differently. Vora noted that, like any alliance, aligning on a North Star and agreeing on what success looks like is paramount. However, these types of initiatives can involve particularly arcane science, even by pharmaceutical industry standards.

“For some of these new modalities, the jargon sometimes overwhelms simple English,” said Vora. “It is critical for the partners to align on what that complex science is. What are the abbreviations and what do they mean?”

Sansom told listeners she has had positive experiences in the past holding “post-kickoff meetings,” which she described as educational seminars intended to onboard new team members from different functions within the company and educate them on the science.

Turn Off Your Technology Mind, Relax, and Float Downstream

Navigating David-Goliath dynamics—always an evergreen topic in the biopharma alliance management community—becomes especially important in the drug modality arena, which is made up predominately of small-large pharma collaborations. Vora said smaller outfits must be careful not to view their technology in a vacuum.

“The science and technology are front and center and all around you,” he said. Thus, small organizations must “take a look at it from a product and patient perspective. How is this technology going to be ‘productized’?… What does that product look like? How is that product going to interact with a potential patient and healthcare system? Having that downstream view could influence some of the near-term decisions.”

Later in the panel, Sharma noted that smaller organizations, which have a “certain sense of excitement and faith” about their products and have fewer restrictions in sharing information about their programs to external audiences, should be mindful of their larger counterparts’ limitations in divulging details about the collaboration to audiences beyond their four walls.

“Our partners might be much less risk tolerant. We need to respect each other’s interests and needs,” he said. “What are the expectations around information sharing as it pertains to press releases, safety information, as well as how we message to regulators?”

Getting Sticky with It: Mapping Out Champions, Builders, and Naysayers

Stakeholder mapping is particularly important for the holders of breakthrough innovations. Sansom said it was important to be “very deliberate about identifying relationships and key contacts, understanding who are the right contacts to be in touch at the team, functional, and senior level. In reality, it should be like Velcro, where you have multiple connections at all the right places to keep it together.”

Sharma added that this map should also spell out “champions, builders, and naysayers.” He defined “builders” as stakeholders who will become critical later in the partnership, such as people in the manufacturing division, and recommended that alliance managers establish “multiple touchpoints with their counterparts” in these functions at the outset of the relationship.

“You’re going to have these building functions that need to take ownership at some future date that may not have the awareness [of your technology] right now,” he said. “How do we get them [to be] part of the game early on?”

Although your best efforts may not always be able to sway the naysayers within your partner’s organization, Sharma urged alliance managers to do what is necessary to “at least keep them at bay,” meaning that they should limit what information gets shared with them so as not to arm them with ammo to shoot down your partnership behind closed doors.

Of course, Vora reminded the audience to do unto others if you want your partner to advocate for your organization internally.

“At end of day, as alliance leaders in our respective organizations, it is important to represent the partner and the partner’s point of view internally,” he said, adding that if you don’t truly understand your partner’s priorities, both parties are more likely to turn to the contract to settle misunderstandings, which is a less optimal way to resolve disputes than relying on the human element.

As is the case with all of our conference recaps, this post provides only a fraction of what was covered in the panel discussion. Make sure you visit the BioPharma Conference portal to listen to the whole conversation, as well as the other great live and on-demand sessions, before it closes on Nov. 30! 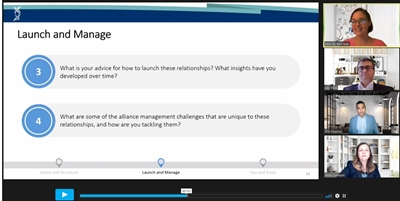