Gender Not So Neutral: Summit Presentation Explores Communication Between the Sexes

Among the many differences, nuances, and shades of gray alliance professionals must parse in their never-ending quest for better communication are those involving gender. It can be something of a minefield—but it’s terrain that partnering pros must often navigate along with different company cultures, personalities, language barriers, cultural and religious backgrounds, and other diverging communication styles.

A presentation at the ASAP Global Alliance Summit in April highlighted some of the different gender communication styles to be aware of. “Battle of the Sexes: Why Gender Matters in Conflict and Communication” was presented by Dr. Vickie Dalton, PsyD, HSPP, a forensically trained clinical psychologist who has been working with the Eli Lilly team to co-teach some of ASAP’s Alliance Management Executive Education courses.

Dalton outlined a few key differences between the predominant male and female styles from her research, noting that no particular style is “right” or “wrong,” simply different. Males tend to:

Not all males or females follow these general patterns, Dalton said. But it can be helpful to know about them and to be aware and adjust, since our biases color our perceptions and interpretations of what’s being said—no matter who we are.

There are differences in how each gender makes decisions, for example, and how the other gender views that process. On that score, men’s decision making tends to be a more “internal process with less input from others”; it also tends to be faster, with at least the appearance of more finality about it. (This made me flash back to the great Carroll O’Connor as Archie Bunker in the sitcom All in the Family shouting, “Case closed!”)

Women may see this male decision-making process as being “arrogant, dominant, domineering, more dismissive, and less informed,” Dalton said. Women’s decision-making process is typically more external oriented, takes more time, and involves gathering more information and feedback from others. Men for their part may view this type of process as evidence of “weak and uncertain leadership”—even when male and female leaders are actually coming to the same conclusions as a result.

Perhaps the most entertaining part of Dalton’s presentation came when she pulled David Thompson, CSAP, chief alliance officer at Lilly and ASAP’s board chair, up onstage to help her demonstrate the challenges of handshakes and other physical contact in business contexts. Turns out the various types of handshakes all have names, according to Dalton: there’s the Double Cup, for example, as well as the Pull-in, the Roll, the Shoulder Grab, and the Forearm Grab. Some of these are meant to express dominance—there’s a lot of grabbing, pulling, and rolling—and Dalton noted that the FBI has actually conducted trainings to help female agents not be intimidated by such shenanigans.

“A surprising number of women don’t know how to do a good handshake,” she said. “They just don’t feel comfortable.” And many men, of course, don’t make it easy.

The potential for misunderstandings and misperceptions is great. When women use body language, such as head nodding and eye contact, to affirm what men are saying, men may take that as complete agreement—whereas women are simply acknowledging that they’re hearing and understanding them. Similarly, men may remain impassive when women are speaking, which can lead women speakers to repeat statements over and over in an effort to convince them—when the males may in fact simply be processing what they’re saying rather than disagreeing.

A Rainbow of Styles

Of course the best alliance managers of both genders are advanced students of communication in all its forms and flavors, verbal and otherwise, and as such are learning all the time. In any event, it behooves us to continue to be aware of gender differences in communication styles as we go forward in managing our alliances.

And while heretofore the onus has largely been on women to be able to “code switch” and adjust themselves to the nuances of men’s behaviors, including communication, one participant rightly noted during the Q&A that it’s long past time for men to wake up and become more aware of how gender differences play out in communication as well. Men can certainly work on being more mindful, accepting, and respectful of different styles of communication: more open and connected, less dominant and dismissive. A worthy goal indeed!

As Dalton concluded, “People feel more connected, valued, and appreciated when you acknowledge them.” That goes for all gender identifications—including nonbinary—and for all the diversity of who we are, in our differences and similarities as well. 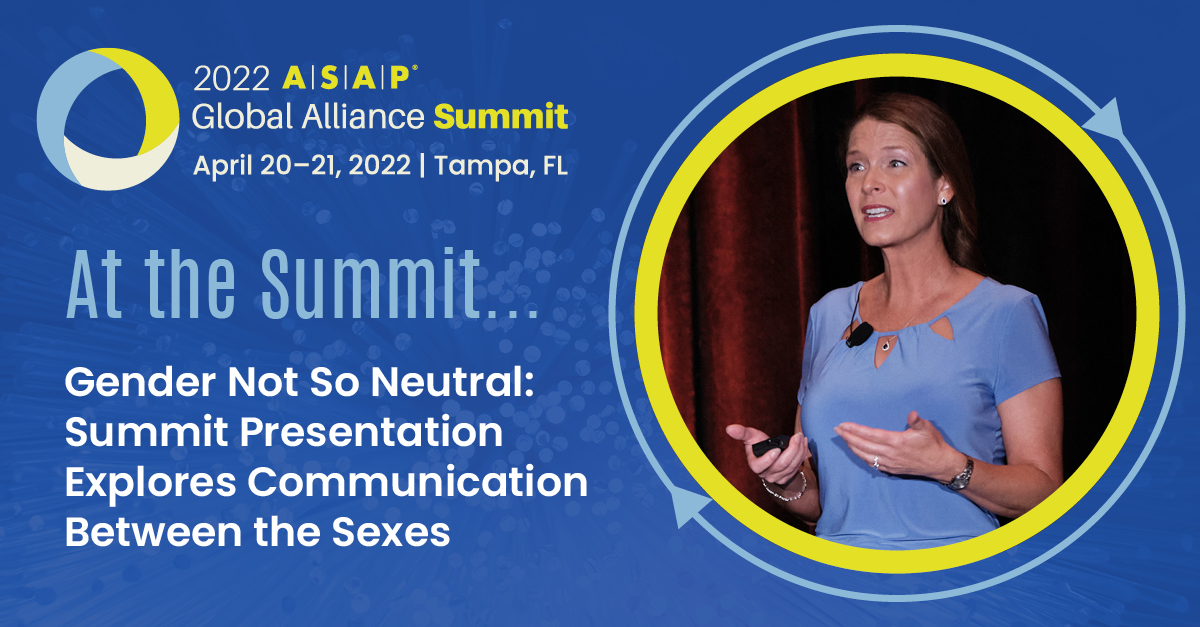