Over the years, the ASAP BioPharma Conference has featured presentations on drug candidates for a variety of diseases and conditions. This year’s event waded into a specific class of diseases that affect fewer people more profoundly: rare and orphan diseases. The former is defined as a disease that affects less than 200,000 Americans, while orphan diseases are conditions that are neglected because they simply aren’t sufficiently profitable to treat.

Told through the lens of his company’s mission to fight Noonan syndrome, a genetic disorder that prevents normal development in various parts of the body, Jeff Livingstone, PhD, CEO of Igia Pharmaceuticals, outlined the members of the rare-disease ecosystem and the challenges in creating drugs for this segment in his keynote presentation, “Developing a Partnering Playbook for Rare Disease Innovation.”

Livingstone didn’t leave any suspense in revealing the keys to bringing drugs for this type of disease to market. Because of the unique challenges that come with ailments of this sort, “it takes a village” to pull all the pieces together. He advised the audience to manage all of the stakeholders from the get-go and engage them early and often.

“Maintain over- and hypercommunication and transparency as to what [is] going on,” he urged, and do it “across the entire landscape,” not just with some of the players in the ecosystem.

“Small, Scant, and Sparse”: Data, Patients, and Access to Resources in Short Supply

“Patient populations are small, scant, and sparse,” said Livingstone. “The whole idea of putting together these huge amounts of data [summarizing] statistically relevant analyses...goes out the window.”

Scour the world for patients with rare diseases, and you might be lucky to find 10 that would qualify for a clinical trial. Livingstone said Igia’s partner Boston Children’s Hospital estimated that it might see two Noonan syndrome patients a year at best. Igia has partnered with nearly a dozen children’s centers across the country to obtain enough trial candidates in a reasonable time frame.

And even if a candidate is right in front of them, it might take physicians years to make the correct diagnosis. Most doctors, at best, might have heard of a particular rare disease in medical school, but they almost never have any hands-on experience with illnesses of this type—“usually these things have multiple indications, multiple effects,” noted Livingstone, which leads to doctors sometimes taking five to eight years to land on a rare-disease diagnosis.

Connecting those people to resources once they are diagnosed presents an additional daunting challenge.

“Most of these people who have rare diseases do not have access [to medical treatment], or if they do have access, it is completely unaffordable. How do you maintain the ability to make these drugs but not affect access?” Livingstone said.

Lucky Seven: The Players in the Rare-Disease Ecosystem

Who are the players in the rare disease alliance ecosystem, and how do you optimize those relationships? Livingstone listed seven entities that are critical to the development of therapies.

Investors get excited about the concept of a rare/orphan disease therapy in the beginning and tantalized by positive late-stage clinical trial results. However, there’s a long road between those two points, and you could find yourself in economic purgatory if you haven’t raised enough cash to get you to those trials. To get over investors’ proclivity for taking a “wait-and-see approach,” Livingstone said the key is to build a financial network of people who are “compassionate” about your mission. In Igia’s case, the prospect of saving toddlers from dying before the age of two helped galvanize those with cash in hand.

One might think it would behoove rare-disease drug companies to recruit globally recognized medical luminaries for the cause, but on the contrary, Livingstone recommended prioritizing dedication over stature. Someone involved in dozens of ventures and pursuits won’t be able to devote the significant amount of time it takes to get these drugs to market.

This has proven to be a persnickety group to deal with for Igia. Livingstone called them “fickle” and relayed a story of how one group within the FDA threw a wrench in the works 18 months into their dealings with the agency when it demanded that Igia conduct a GLP (good laboratory practice) study, an endeavor that would have cost the company $1 million and led to significant delays. Knowing what he knows now, Livingstone recommended making connections within these agencies early in the process and having off-the-record conversations about what it would take to get these drugs authorized.

“Even though the agency can’t formally take a position, can’t condone your treatment, you can have private conversations with people who are very interested in your disease,”  he said.

It’s tough to find health professionals with extensive knowledge about a particular rare or orphan disease. That’s why “it’s really important to engage associations related to [your disease area],” according to Livingstone. Igia, for example, was able to educate and excite general pediatrics and cardiovascular organizations about its cause.

Organizations like the Noonan Syndrome Foundation and others granted Igia access to patients and their families. Livingstone characterized parents as “amazingly engaged and knowledgeable” and called them a “force of nature” in terms of the help they provided in making phone calls and forging connections that could advance Igia’s goals.

“They knew more about the science than most of the physicians and scientists working on various parts of the disease,” he said. “If they realized there was a chance that your therapy could actually do something for their children, they would knock down walls, they would knock over buildings to make it happen.”

Legislation and public policy are important elements in attracting funding and resources for rare and orphan diseases. That’s why Livingstone touted newsletters put out by organizations like KPM Group that keep the public informed on this disease segment, as well as the efforts of Global Genes RARE Corporate Alliance and the Rare Disease Company Coalition, “coalitions of companies working in rare disease that come together once a quarter to exchange problems.”

The definition of rare disease and the perceptions of these illnesses vary greatly from country to country.

“If you have a plan to recover economically from your great investment [by] going global, it’s really important to understand these distinctions,” said Livingstone.

There are foreign advisory groups that can “help build out a product development strategy specifically for those markets,” according to Livingstone, one of which helped IGIA leapfrog regulatory hurdles in Asian countries.

Believe it or not, this recap only scratches the surface of what Livingstone covered in his keynote address. Those who registered for this year’s ASAP BioPharma Conference can access the entire presentation in the conference app now to hear more about the legislative history of rare and orphan diseases and the economic models that are emerging to capitalize on a market that is expected to grow to $300 billion in 2030, according to figures cited by Livingstone. 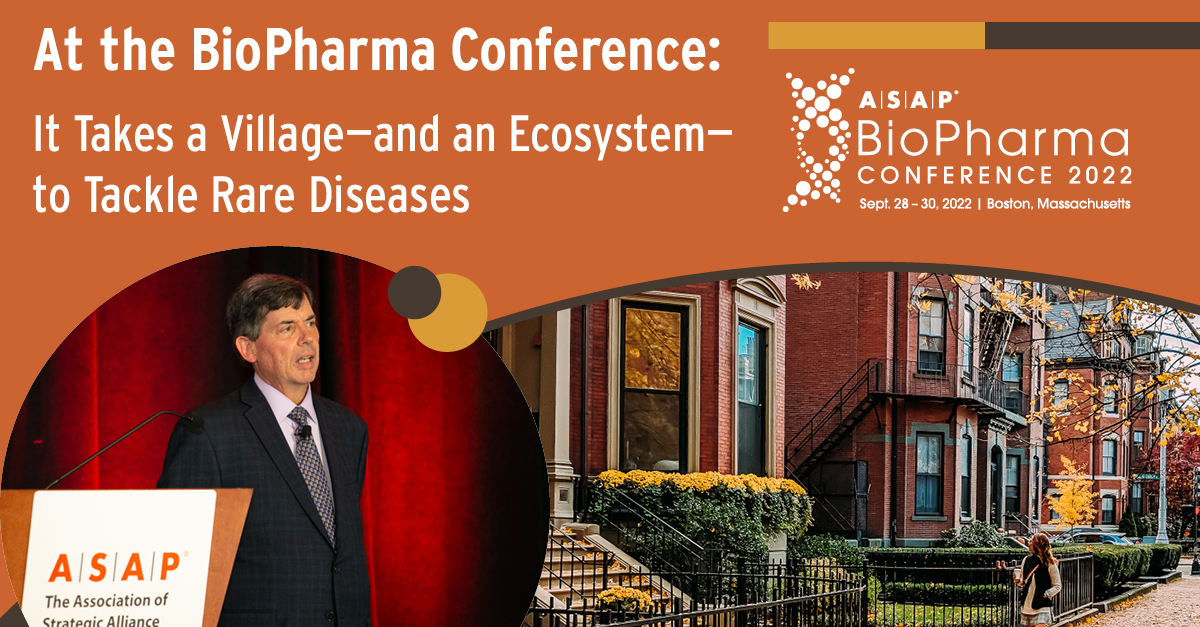 Getting Better All the Time: Continuous Improvement in PartneringOctober 20, 2022 Strategic Alliance Relationship ManagerOctober 18, 2022