Latest in Commercial Alliances: Divided Geos, a Growing Ecosystem, and the Importance of a Well-Plan

Commercial alliances are getting simpler in some ways and much more complex in others as the pandemic, changing corporate cultures, and increasing globalization continue to shape the pharmaceutical industry, according to participants in the 2021 ASAP BioPharma Conference roundtable "Commercial Alliances Best Practices, Sales Coordination, and Regulatory Issues" held in late September.

Derrick Geick, executive director of alliance management at Novartis, presided over a rich discussion involving more than a dozen executives from Big Pharma, biotechs, and consultancies from multiple continents that produced several insights into the industry’s current commercial landscape, most notably that partners are splitting copromotion activities by geography more often, the biopharma partnering ecosystem is getting larger and more complex, companies are undergoing internal transformations that are impacting alliances, and not enough attention is being paid to exit strategies.

Walling Off Sales Activities, but Not Growing Number of Partners

Companies going to market together are increasingly dividing up sales responsibilities by geographic area. There seem to be fewer instances of companies coselling in the same country or region, and this arrangement has simplified commercial alliances in some respects.

“A lot of the complexities and issues in the past that might have had to do with how are the calls and targets allocated, how are you dividing up the impact on sales and percentages for royalty payments and so forth…a lot of that seemed to be mitigated,” said Geick, summarizing the roundtable group’s sentiment. “You don’t have so much issue of customers being confused or not getting the exact same message. You’ve only got one company with people who got one set of training [in each territory].”

But while separating activities within countries might be making the sales process easier for the two primary sellers, commercial initiatives are increasingly requiring more partners to execute, which has introduced new complexities. The days of primarily one-to-one partnerships are giving way to multiparty collaborations with a variety of specialty organizations, and the pharmaceutical company at the center of this group is struggling to coordinate these parties. Where the tech industry has gotten used to this “ecosystem” model over the years, pharma is still acclimating to this emerging “spoke-and-wheel” arrangement, with the inventor of the medicine serving as the hub.

“[Roundtable participants] saw more of a fractured landscape—lots of different contracts with different partners around a single medication when it came to the development, manufacturing, and commercialization,” said Geick. “Sometimes you would need communication between the partners for transitions and handoffs for the overall commercialization. You might not have confidentiality, you might have companies with different maturities and so forth, and that was driving a lot of complexity.”

Goals Beyond the Money

And it’s not just the external business environment that is changing rapidly. Companies themselves are reevaluating their own philosophies and priorities. Executives discussed their organizations’ growing efforts around environmental and social justice. Many other companies are changing the way they operate internally. Geick spoke of Novartis’s move toward a “flattened power structure” and “unbossed culture,” for example. One contributor exhorted his peers to align on intentions at kickoff or very early in the collaboration in order to understand their partner’s changing mechanisms.

It’s not just the beginnings of collaborations that need attention. Organizations aren’t thinking about their end until it’s too late. Partners understandably tend to be optimistic at launch, buoyed by the anticipated gains from joint initiatives. However, they often fail to plan on when and how to unwind partnerships once they have served their purposes.

“The overarching message was, don’t wait until the end to think about that. The exit strategy should be framed out and clearly stated at least three to five years ahead of big events like loss of exclusivity,” said Geick. “There need to be strong, clear determination clauses that will guide that.”

Geick added that there was a little debate among roundtable contributors about whether to be very prescriptive or vague in framing clauses around the termination of an alliance­—since many pharmaceutical partnerships span a decade or more, some felt that all parties should allow for flexibility since it’s near-impossible to anticipate the commercial and regulatory landscape that far in advance.

ASAP BioPharma Conference attendees can catch sessions they missed and watch their favorite presentations a second time in the Attendify app. These sessions will be available until early November. 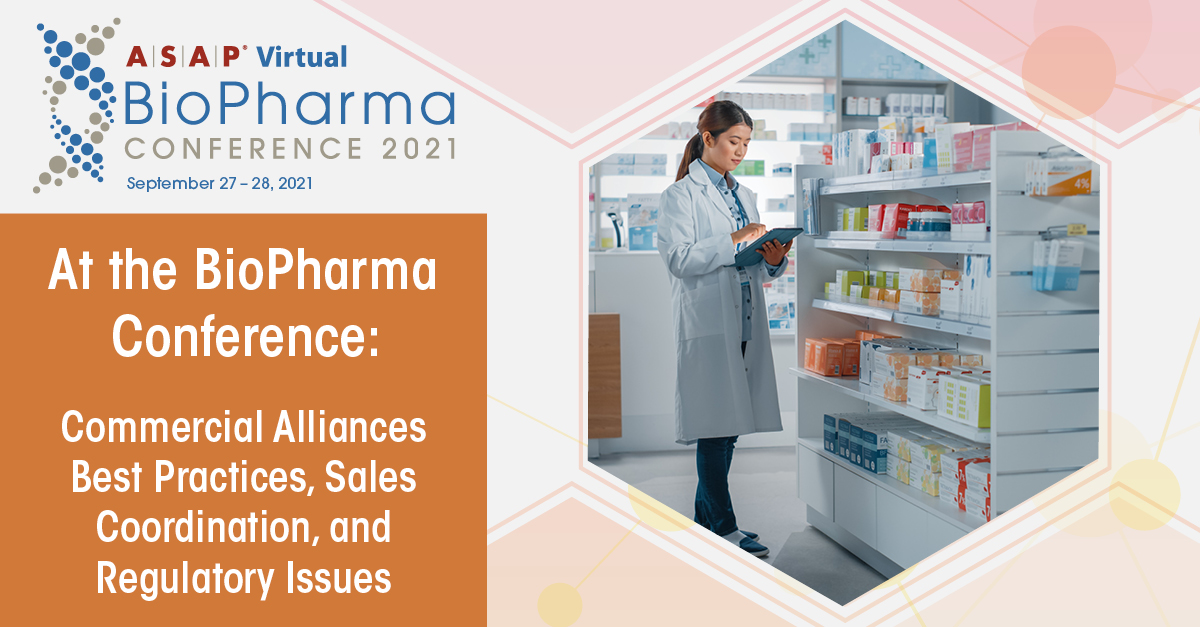