Here’s a question: What if you woke up one day to learn that your company had been acquired by another, larger company?

Here’s another one: What if you woke up one day to learn that the company with which you’re in an important alliance had just been acquired by a larger company?

Neither scenario is uncommon—see, for example, “A Process, Not an Afterthought,” Strategic Alliance Quarterly, Q2 2020, on alliance integration after M&A activity—and either one can be riddled with uncertainty. Both were addressed in a presentation at the 2021 ASAP BioPharma Conference, just concluded late last month.

“Managing the Health of an Alliance Through a Major Acquisition and Integration” came on the second day of the conference and featured Nisha Zaidi, executive director of research and early development alliances at Bristol Myers Squibb, and Gideon Bosker, founder and CEO of DarwinHealth, Inc. Zaidi was an alliance leader at Celgene, which had a collaboration dating from August 2018 with DarwinHealth, a six-year-old biotech involved in novel cancer drug discovery.

Then one day the world changed: on January 3, 2019, Bristol Myers Squibb (BMS) announced it was acquiring Celgene; the deal would close 11 months later, in November of that year.

“As you can imagine, it was quite a shock for us,” Zaidi recalled of her Celgene team, “but in our alliance role, we did not have much time to contemplate our own future because we had to think about our partners. It was an exciting announcement, but we also knew there was going to be some uncertainty.”

To deal with it head-on, Zaidi went back to the alliance contract—specifically the “change of control” clause, which she said was “one of these [clauses] we tend to skim.” But after an acquisition, what would the “change of control” clause mean for alliances? How would Zaidi and her team—still Celgene at this point—work with partners between the announcement and deal closing? And how would Celgene and BMS navigate the integration as a combined company?

Over at DarwinHealth, there was uncertainty as well—and also “anxieties,” as Bosker readily acknowledged.

“Nine months of collaborating leads to some very deep and complex technical understandings, and of course we were very concerned about whether or not that level of understanding would continue with an entirely new regime,” he said. “But to cut to the chase, thanks to Nisha in great part, we were able to negotiate seamlessly and with great success.”

A Journey with a Steep Learning Curve

Seamlessly and successfully, yes. But without challenges? Certainly not. Bosker described the course of the alliance from DarwinHealth’s point of view as a “journey” through the acquisition and integration process, starting with the announcement by BMS.

“We knew we would have to deal with some fairly gnarly problems,” Bosker admitted. “How will the alliance structure change? Will it change? Will the alliance-centric processes we had spent a lot of time developing remain in place and govern the future relationship? Will they be the protocols of the original partner, in this case Celgene, or will they be new protocols we have to adjust to, of the acquiring partner, BMS? Or will there be some hybrid approach?”

Further complicating the picture was the prospect of personnel change—including possibly Zaidi—and whether that turnover would mean having to “build a new alliance from scratch,” especially one involving complex technology with a steep learning curve. Would there be internal frictions at BMS/Celgene? An alliance reset? Gnarly problems indeed!

But not to worry.

“Nisha picked up the phone and called me and provided some assurances and a roadmap for what was to come,” Bosker said. “She was on the phone before I was. As part of the integration, Nisha was the channel.”

In the end, some Celgene team members did leave, but Bosker said that Zaidi “stabilized the ship, and Celgene helped navigate the situation masterfully.”

“It Takes Two Hands to Clap”

Zaidi said she did pick up the phone to provide Bosker with reassurance. “But it doesn’t just stop there,” she said. “As alliance leaders, we must always communicate effectively—we all know that. But I think this is the most critical thing to do during an acquisition.”

For Zaidi, this meant engaging partners personally, reinforcing the value of collaborations, and letting them know it would be “business as usual” while at the same time being transparent and preparing them for potential upcoming challenges.

Two and a half years after the acquisition, the BMS/DarwinHealth collaboration continues to move forward. In fact, the partners embarked on a second collaboration in March 2021.

“None of this would have happened unless the integration succeeded and moved seamlessly and it wouldn’t have been possible without a strong alliance leader and relationship,” Bosker said. “And our role, although active, was relatively passive compared to Nisha’s, because she was not only critical in allowing that relationship to navigate through the pandemic and through the integration, but she always wanted to see it evolve beyond its original scope. We’re pleased to be at that point now, and it’s moving ahead at lightning speed.”

Zaidi appreciated the praise from Bosker, but noted: “It takes two hands to clap, and the success of a collaboration lies with both partners.”

The Art and Science of the Alliance Management “Maestro”

There were challenges for both organizations, especially in the period between the announcement and the actual closing of the deal, when Celgene and BMS were still two separate entities.

“Integration doesn’t begin until the deal is closed,” Zaidi explained. “We didn’t know what was happening at BMS, so it’s not like we could have shared that. That as you can imagine was very challenging.”

“You’re going to be able to take the temperature of an alliance early on, not only based on the individual talents of your alliance manager but the protocols, concepts, and foundational processes that have been codified into the alliance process. It was very interesting to me, and I developed a tremendous amount of respect for what alliance managers do: juggle highly complex technical issues, as well as personal issues in terms of dealing with CEOs who aren’t the easiest people to deal with—myself included.”

ASAP BioPharma Conference attendees can still access and view conference sessions using their Attendify app until early November. And stay tuned to the ASAP Blog for continuing coverage as well! 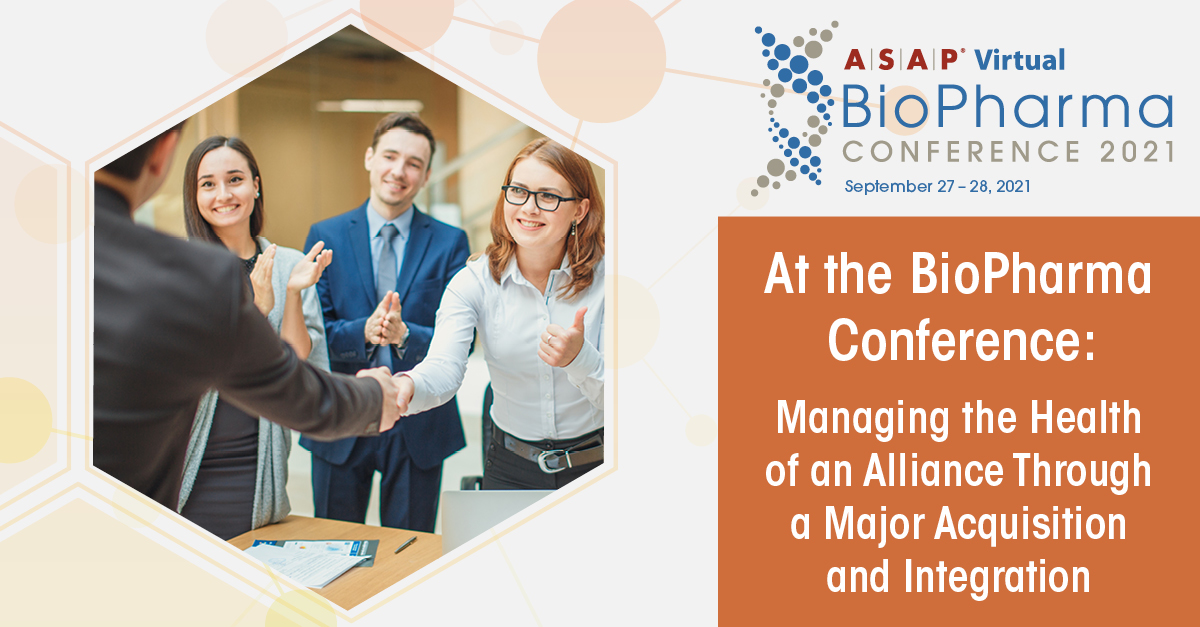 In Good Hands: ASAP Board Elects New OfficersOctober 21, 2021 Latest in Commercial Alliances: Divided Geos, a Growing Ecosystem, and the Importance of a Well-PlanOctober 14, 2021