Posted By: Michael Burke in

What happens when a more than three-decade-old alliance that has gone through its share of turmoil nears the end of its contractual life? Does it simply wind down in collective exhaustion, ending with a whimper? Does it crash and burn? Or can it somehow rise from the ashes of the past?

Two European biopharma companies struggled toward the answer to that question, and ended up resetting and relaunching their alliance to mutual benefit. Eric Ferrandis, CA-AM, vice president of strategic alliances at Ipsen, and Fabrice Paradies, director of industrial business development and global commercial alliance at Debiopharm Group, described the process of bringing their two companies’ productive partnership back from the brink and back to life in their presentation, “Partnership Reset and Launch: How to Complete the Past?” at the recently concluded ASAP BioPharma Conference 2019, held Sept. 23–25 in Boston.

Paris-based Ipsen, a 90-year-old company specializing in oncology, neuroscience, and rare diseases, and the 40-year-old Debiopharm, a drug development company based in Lausanne, Switzerland, had an alliance going back to 1983 that had been very productive for both of them. This 35-year partnership sprang from a series of agreements and amendments for the licensing of Triptorelin—brand name Decapeptyl—a drug used in the treatment of advanced prostate cancer, endometriosis, and breast cancer, among other conditions.

The DKP alliance, as it was known, created value for both companies, but as Ferrandis and Paradies acknowledged, it also had been set up in such a way as to cause “pain points” that those working on the alliance had never been able to address holistically. So what to do?

As the alliance agreement neared its end by mid-2018, both companies’ CEOs agreed that a new alliance framework must be put in place, with negotiation leads empowered to get a new contract signed by the end of that year and relaunch the alliance for the long term. Accordingly, by July 2018 the companies hired the consultancy The Rhythm of Business to help get their partnership back on track by identifying the key problems that had hindered its efficient functioning and to assist in rebuilding a common vision for the alliance.

The initiation of the reset process involved two workshop sessions covering two days and involving personnel from key functions across both companies. Among the key findings that emerged from those sessions:

Armed with these findings, the two companies’ negotiation teams—primarily three people on each side, with support from above and below—set about to restructure the alliance and set it on a better course, by:

As Ferrandis commented, “Everything is about trust.”

As the new agreement was being negotiated, it was agreed that the old contract would remain in effect and the status quo of the alliance would continue on both sides. Other key points, according to Ferrandis and Paradies:

Both Ferrandis and Paradies admitted that while everyone involved wanted to “move fast” on the reset effort, it was important to lay the groundwork even before negotiations commenced to get the partnership relaunched. “We had to change the mindset” internally, said Paradies. Doing this work ahead of time—and having “the right people in the room,” as Jan Twombly, CSAP, principal of The Rhythm of Business, noted—led to a “new partnership spirit” in the alliance, according to Ferrandis.

Ferrandis also cited leadership as “the greatest alliance management skill,” adding that behaving as a leader includes going to senior leadership when necessary to get buy-in and help get issues resolved.

A new agreement was signed in 2018 that provided for 15 additional years of partnership between Ipsen and Debiopharm, featuring a new economic model with better-aligned financial terms, a new R&D framework with cost sharing for codevelopment mechanisms, new governance giving Ipsen final say over development and commercialization and Debiopharm control over manufacturing, and what the copresenters called a “commercial bold ambition.”

And once the new contract was signed, senior company personnel celebrated with a joint dinner in Montreux, Switzerland, on Lac Léman (Lake Geneva). The moral? For the rebirth of a long-running alliance like this one, said Ferrandis, “Don’t forget to celebrate each time you can.” 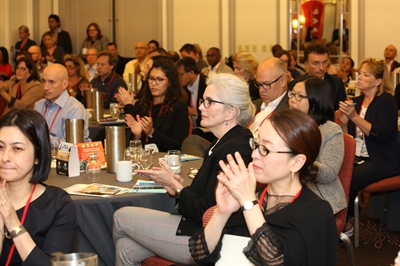 Ahead of the Curve...ASAP and Strategic Alliance Quarterly celebrate the past while looking firmly tOctober 25, 2019 Join Our Shared Alliance Aces Community Today!October 16, 2019