Riding the Roller Coaster in a Long-standing Alliance

How do you keep a long-standing alliance moving forward productively? Put another way, how do you keep a roller coaster humming along on its tracks, despite the ups and downs?

The answer, in a nutshell, is to have tools, frameworks, and lots of communication. And for good measure, a dedicated team whose sole purpose is to look after the health and success of the partnership. In a word, resilience.

That was the message of Alistair Dixon, PhD, head of alliance and integration management at UCB, and Tracy Blois, PhD, director, alliance management business development at Amgen. Their presentation, “Resilience in Alliance Management: How Amgen-UCB Managed the ‘Roller-Coaster Ride’ of a Long-standing Alliance,” was just one of many sessions now available on demand from the virtual ASAP Global Alliance Summit.

From Molecule to Market

This alliance began back in 2002, as a partnership between Amgen and Celltech. In 2004 Celltech was acquired by UCB, and the partnership continued as a collaboration license agreement for research, development, and eventual marketing of antibody products targeting the protein sclerostin, which plays a role in bone formation. As Blois described it, this was conceived as a partnership “from molecule to market from very early on.”

Profits and losses would be shared equally, and as Dixon said, “This collaboration agreement is truly structured to foster collaboration, alignment, and concession.”

Perhaps surprisingly, given that UCB is European, headquartered in Brussels—Dixon is based in the UK—and Amgen is a US company based in Thousand Oaks, Calif., Dixon reported that the cultural differences between the two companies were not actually that great. Organizational and internal structures, however, were another matter.

UCB is organized around “patient value units” and “product missions,” and regional leads report back to business units. Amgen, on the other hand, is more traditionally organized into R&D, operations, and commercial, and the regions report back to the commercial division.

Exploring Differences, and Cooling Off the “White Heat”

It was important first that these organizational differences be understood and communicated, and that some tools and strategies be developed for the sake of the alliance. These have consisted of three main pillars:

The tools in particular were helpful, including a Circle of Value tool provided by Vantage Partners, as well as joint problem-solving frameworks, “ways of working” frameworks, and exercises in joint scenario planning. The latter, according to Dixon, helped the two companies to “prealign” before finding themselves in “the white heat of a difficult situation.”

Reaping the Benefits of an Elevated, ALTernative Governance

Having a flexible governance model helped as well, but one of the biggest contributors to the alliance’s success has been the formation of an Alliance Leadership Team (ALT), specifically focused on the needs of the partnership and its ongoing health. The ALT membership is composed of senior program leadership, along with representatives from global alliance management, global project management, and finance—all from both organizations, working together.

According to both Dixon and Blois, the ALT has been able to resolve issues, avoid escalations, establish more trust, and more proactively manage the partnership overall—which has made for better cross-functional execution by the joint project team, as well as more “elevated” governance by the joint commercial committee and other governance bodies.

Dixon and Blois both see the ALT as a team specifically set up to focus on the success of the partnership. The key role it plays has meant that:

Meanwhile, the years of research and development and hard work by all concerned resulted in a new drug called Evenity (romosozumab), approved for treatment of osteoporosis among postmenopausal women at high risk of bone fracture. So the partnership not only has kept the roller coaster on the tracks, but arguably has been an exhilarating success.

“Resilience has been absolutely key to this,” said Dixon. “Being able to sit down, understand, and have open and transparent conversations with people has been critical to what we’ve achieved.” 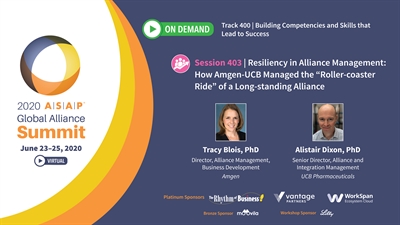