Strong Partnerships Are No Accident—Just Ask the Ambassadors

As we head into 2022, we’re looking back at ASAP’s fall 2021 events, focusing on some of the great insights shared by presenters and panelists on various types of alliances as well as alliance skills, capabilities, and fundamentals.

On the latter aspect, it’s always good to revisit some basic, foundational questions: How does an organization elevate itself to become a “partner of choice”? How does it not only build an alliance management function and make it visible but transform it into an essential component of business processes, from deal negotiations to M&A integration to alliance termination and beyond? Perhaps most important, how can a savvy organization construct its alliance management function so it delivers the greatest value and minimizes the impact of risk?

These and other topics were explored in November’s ASAP European Alliance Summit in “Building a Community of Alliance Ambassadors,” presented by Knut Sturmhoefel, global head of alliance management at Novartis (and an ASAP board member who now serves as its treasurer). Sturmhoefel described an important “culture shift” that occurred at Novartis beginning three or four years ago.

Want to Be a Good Partner? Call Out the Fire Brigade

Like many pharma companies especially of its size, Novartis was engaged in numerous alliances—representing over 50 percent of its R&D and commercial pipeline—but it had a kind of epiphany, according to Sturmhoefel, that “perhaps we’re not the first one to access frontline innovation. So what can we do to be really recognized as a partner to do deals with?”

To start, Sturmhoefel emphasized understanding what alliance management actually does and the value it brings. He described its role as “providing a helicopter view” of alliances to the organization, and building bridges between partners—bridges with guardrails, however, referring to the risks involved. He urged the audience to look beyond the notion of alliance professionals as “relationship managers” or “firefighters,” noting that in a sense alliance management is actually a “fire prevention organization”: getting involved early, performing due diligence, and identifying potential risks. As such, he said, alliance management is ideally “a business partner throughout the deal life cycle.”

Novartis, through its global alliance team of 18 alliance managers, now manages something on the order of 280 alliances, according to Sturmhoefel, and these are prioritized and divided up into three tiers, plus out-licenses (and some additional commercial/local alliances). Not all alliances are created equal, so they’re not all managed the same either. Meanwhile, as the number of alliances being managed increases, so does their complexity. There’s more M&A activity (with more acquired alliances), more out-licensing for big pharma companies, and more clinical trial collaborations and partnerships with NGOs, foundations, government agencies, healthcare systems, and more.

To deal with this changing landscape, Novartis sought to strengthen and solidify its alliance management function. It created the Office of Novartis Alliance Management—its acronym, ONAM, turns out to be the name of a Hindu harvest festival, which Sturmhoefel found fortuitous—including a center of excellence or “alliance management academy” to share knowledge and best practices and to build up what Sturmhoefel identified as six core competencies: situational flexibility, organizational agility, collaboration, joint problem solving, conflict management, and alliance know-how. Additionally, he said, Novartis embraces “the three C’s” of culture, collaboration, and capabilities.

Leading into the question-and-answer session, moderator Nick Palmer of BTD mentioned that in biopharma especially, the ability to be seen as a partner of choice is critical, since partnering is so vital and companies have choices in terms of whom to partner with. He also wondered out loud whether it’s important to establish alliance management as a “career of choice” and to elevate the profession accordingly. But Sturmhoefel cautioned that this may be the wrong focus.

“You have to demonstrate the value that managing alliances in a professional, consistent way brings to the organization. If we don’t manage [alliances] right, how does that reflect on the organization?”

A Community of Ambassadors

Finally, Sturmhoefel acknowledged that building up the function is very much a work in progress at Novartis—which is not necessarily a bad thing. Beyond his team of 18 alliance “ambassadors,” he said, “it was important for me when I came into this role to build a community around it.”

So far, he said, the tangible outcomes of the “partner of choice initiative” are mostly visible internally, but they’re part of a growing trend.

“There’s work to be done,” he said. “I believe we have an impact. We need to think more broadly, and make alliance management part of our working styles.” Also, he said it’s important to learn from other industries such as the airlines and tech industry, and to benefit from that “cross-fertilization.”

In the end, he noted, “We’re strengthening alliance management across the organization so we avoid costly mistakes.” 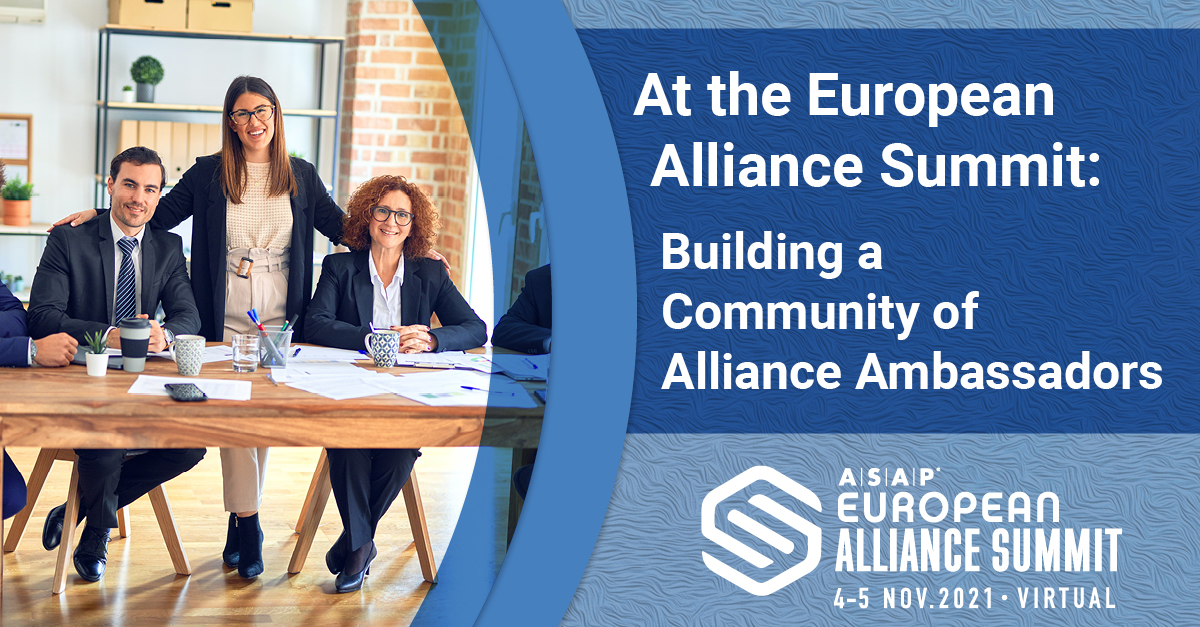 Chipping Away at a New Partner EcosystemJanuary 12, 2022 Can’t Save the Planet Alone: Cross-Industry Partnerships Seek to Produce Sustainable Business ModelsDecember 20, 2021