ASAP audiences have learned a lot from Jay McBain, principal analyst for channel partnerships and alliances at Forrester Research. His writings, past addresses to the ASAP Global Alliance Summit, and other appearances in print and in person have always proved enlightening, and his Summit keynote this year should be similarly educational—and peppered with predictions as well. Titled “Alliance Professionals Take Center Stage in the Decade of the Ecosystem,” it takes place Tuesday, March 16, the second day of the Summit.

There’s much to learn these days, as the trends McBain has identified in recent years affecting alliances, channels, and ecosystems have only accelerated in the COVID-19 pandemic.

Every Day He Writes the Book

Take Zoom, for instance. It’s quickly gone from an interesting novelty to something that is woven deeply into the daily fabric of our lives. And while many of us feel “Zoomed out” at times, McBain actually sees it in a different light.

“What has Zoom done?” he asked when we spoke (on Zoom, of course). “We’re only a year into the Zoom story, but underneath Zoom there’s an alliance story that makes it successful. They’ve built up a Zoom marketplace, they’ve got thousands upon thousands of companies building on this Zoom platform. None of them are resellers. There’s no such thing as a guy in a white van going door to door selling Zoom. The product-led growth model completely takes the channel away from it—there’s no transactional channel. But [its] ability to grow is fully an alliance story—you could write a book about it, actually.”

Someone will write that book someday, but McBain’s too busy with today—and tomorrow. He’s busy observing a massive “celestial” universe in which, as he has argued before, every company is becoming a tech company and many companies’ business models are fast becoming unrecognizable—in some cases, outright obliterated—due to the rise of ecosystems.

The Channel Influencer and the Influence Channel

And although he remains at heart a “channel guy”—he spent his formative years at IBM and Lenovo, was CEO of the software company ChannelEyes before landing at Forrester, and was just named “2021 Channel Influencer of the Year” by Channel Partners magazine—when he looks ahead he sees a future in which it’s alliance professionals, not channel managers, who have the skills and the vision to take their companies into that future. An ecosystem future.

In the past, McBain spoke of “ecosystem outcomes” and their implications for alliance professionals. Working in ecosystems, working with systems integrators and with those who influence and drive adoption and retention—all of these, McBain argued, are less transactional activities and more about ongoing relationships. In other words, right in the sweet spot of alliance managers.

The rise and growth of ecosystems and online marketplaces and the increased deployment of subscription/consumption models are among the trends McBain has kept a close eye on. Just in the past few months, he noted, IBM replaced its CEO and divided into two companies, Dell and Cisco went to subscription models, and HPE reported that its own ongoing subscription journey will be complete by 2022.

“They’ve all announced within the past year a build, sell, and service trifurcated model, as we predicted they would,” McBain said. “They’re starting to move money into nontransacting activities that need to be managed around value creation, network effects, and co-innovation—which again is alliance managers.”

As usual, McBain had a lot to say—more than this space can hold—about the implications of these trends. But his main point? Search the skies (figuratively speaking). Somewhere in that expanding ecosystem universe is a place for savvy alliance professionals and their skill sets—if they know where to look and which skills they’ll need.

“If you go backwards, there’s a huge contractual piece that goes into how this all works,” he explained. “There’s a huge psychology piece: being a mediator, for example. Being able to handle an infinite amount of moving parts. An ecosystem is not a linear supply chain. The world has always been a straight-line linear model, where an ecosystem is anything but linear. It’s celestial. So psychologically, the ability to look up into the sky and understand there’s big galaxies with big star systems—you’ve got big Microsofts out there, on the other side you’ve got big Pfizers. There’s big galaxies, like Milky Ways with huge gravitational pulls.

“And [for] an alliance manager, their greatest skill might be to predict when the stars and moon are going to align. And when that alignment happens, they’ve got all the front-end skills to get it to that point, get the deal signed, and then the downstream skills—and this is where I think the skill building needs to happen the most—on execution. We know the failure rates of alliances over the last 50 years [haven’t] improved all that much. The fact of the matter is the alliance leader has never been in charge of execution.”

Alliance Olympics: Time to Bulk Up!

So alliance professionals will need to sharpen their own skills if they’re going to take the lead in this ecosystem future—which is already here—and their companies will also need to include alliance management at their strategy tables. In their deal negotiations. In their C-suites. Everywhere across the ecosystem universe.

“There’s a process element, there’s a programmatic element, there’s a technology element,” McBain said. “Underneath all of that there’s a people element to alliances. For all this to be successful, and for alliance managers [to] become the ecosystem managers, they have to bulk up. This is an Olympic sport, and [some aren’t] ready. They [need] to have the energy and the curiosity and the audacity to go do this. The audacity to go to the CEO and say, ‘Hey, you’re going to spend money on this. And I’m the right person to run it.’”

The good news? Massive scale, along with more jobs, better visibility, greater importance, and even more lucrative remuneration for the right alliance leaders.

“The scale is 10x,” McBain predicted. “A lot of this is just early trends, right? But if every one of 10,000 companies has to create an ecosystem role, those are 10,000 jobs opening for alliance leaders—on a completely different pay scale than they’re at today. We’re talking about million-dollar jobs at big companies.”

A lot of alliance professionals who are ready to move into leadership positions probably can’t wait for that “celestial” day to arrive.

For more information about the Jay McBain keynote as well as the rest of the ASAP Global Alliance Summit, and to register, please visit www.asapsummit.org. 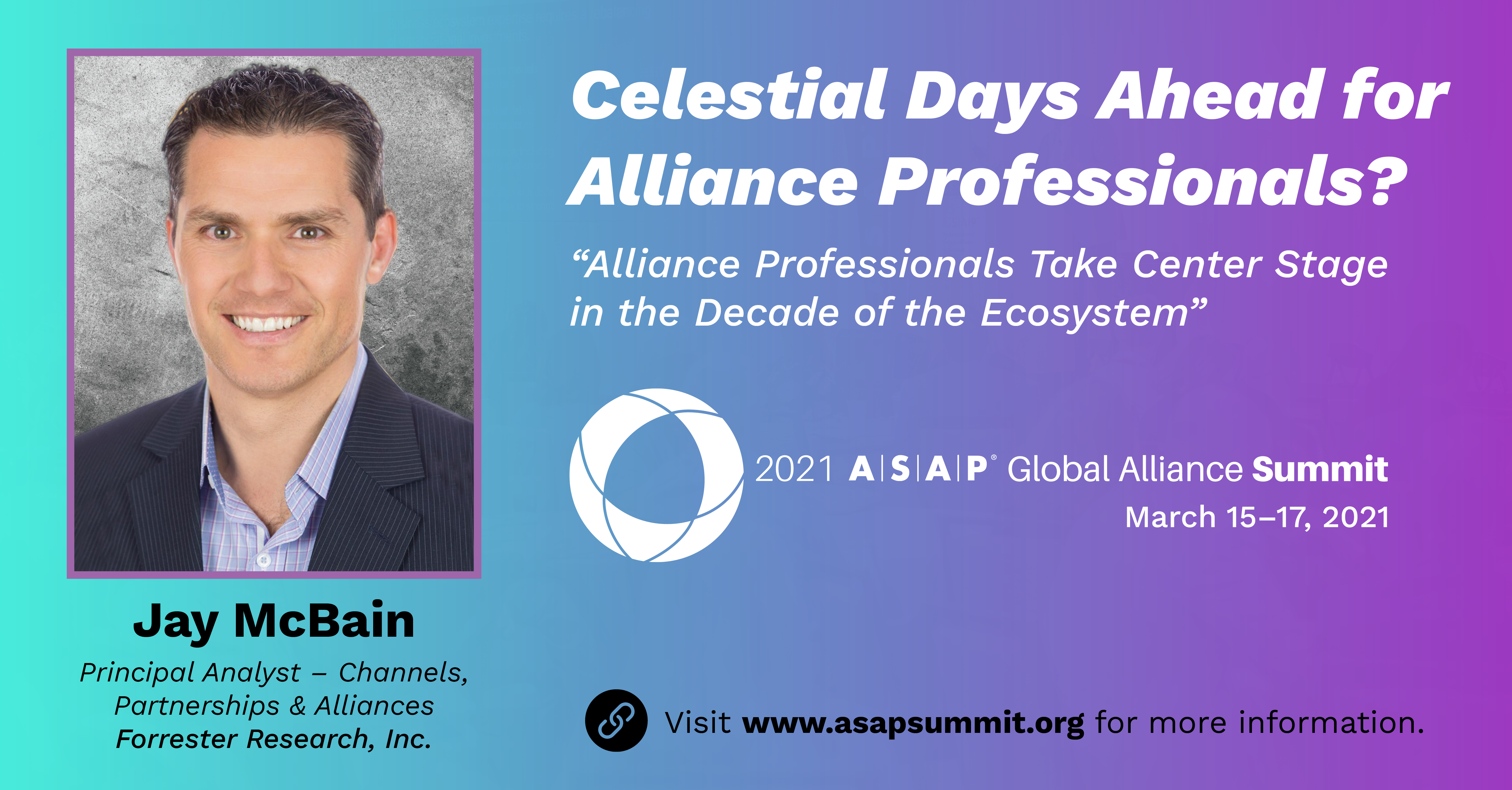 Summit Preview: How Citrix and Its Partners Ushered in the Future of Work—“New Normal” VersionMarch 4, 2021 The Power of Seven: Netcast Webinar Reveals Habits That Help Alliance Professionals Deliver ValueFebruary 18, 2021