Internal alignment has been an area of focus in recent ASAP programming. During last month’s ASAP Roundtable on the topic, it was suggested that alliance managers spend 70 percent of their time on this endeavor. A straw poll of attendees of ASAP’s most recent roundtable, “An Inside Job: Performing the Critical Internal Work of Alliance Management,” seemed to confirm this point: a whopping 94 percent agreed with the statement that stakeholder alignment hogs anywhere from 70 to 80 percent of their workday.

Or did they? Some went as far as to say that they spend even more than 80 percent reeling in folks within their own organizations. Others called it an area of “pretty vast” scope that requires a lot of “heavy lifting.”

In these discussions, executives from multiple industries employed by both large and small organizations swapped stories about the challenges that illustrate why this aspect of alliance management takes so much time, and traded tools and trade secrets for getting every part of the organization on the same page as it relates to  collaborations.

Many Stakeholders, Even More Challenges Bringing Them Together

Predictably, the obstacles were many and varied—competition for internal program resources, organizational silos, lack of clarity on the partnership’s vision or purpose, changes in executive leadership, a lack of familiarity with alliance governance structures, and even disparate time zones, to name a few. Perhaps equally unsurprising, those working in biotechs and smaller organizations appeared to have a larger internal stakeholder education burden. “People need a broader picture,” said one participant, which entails “a lot of coaching.”

Who are alliance managers trying to align? Attendees spoke of stakeholders from the C-suite, sales, marketing, manufacturing, product development, finance, legal, therapeutic areas, regulatory, and project management. In one breakout group, the internal parties broke cleanly along the relative size of the organization; alliance professionals at smaller companies tended to deal directly with senior management—executive team members, C-suite leaders, heads of research, etc.—while those at larger institutions dealt more with heads of divisions and therapeutic areas.

Of those internal audiences, some reported difficulties with quality control and supply chain employees, who tended to be under the spell of “not-invented-here syndrome.”

“They’re living in a black-and-white world; alliance management is not,” recalled the participant.

Oftentimes, it isn’t any particular group or executive refusing to fall in line; in many cases, an evolving situation shifts other people’s priorities. For example, one attendee noted that cooperative employees can lose focus if the alliance no longer meets company objectives.

“When your alliance meets product gaps, they’re great. But what happens when your organization’s strategy changes?” he asked. That person answered his own question by recommending a thorough “tough conversation” to reevaluate the partnership’s fit with company goals.

Roye himself recalled a time when a salesperson gave the alliance team pushback on an initiative he initially championed in an internal group discussion. It turns out that “people respond differently with the boss present [than] alone,” he said. “We must keep remembering not to take anything for granted,” not even the support of your own people.

Bubble, Bubble, Toil and Not So Much Trouble

Not everybody is prickly, though. One group reported that legal, finance, and IP folks tended to be “partners” to the alliance management team.

Another biopharma alliance manager counted on program managers, who are closer to each department’s day-to-day affairs, to have a pulse on how the people with alliance responsibilities are progressing in their duties.

One Exec Sponsor Is Not Enough, Jack, Better Make It Three

What are some ways to get buy-in from the ground troops from other departments? The most obvious is getting executive sponsorship. Or better yet, get the backing of more than one senior leader. One group invoked the 2015-16 Golden State Warriors and proffered a “strength in numbers” philosophy.

“When the strategic value of an alliance is well recognized across top management, losing a single sponsor doesn’t make a huge difference,” concurred a contributor from one of the other groups.

Making Use of Software, Communications Plans, and Meetings

There are more tangible tools that can help manage stakeholders. One group predominantly relied on the allianceboard alliance management software platform to share critical information, while others develop their own reporting systems for tracking progress, milestones, risks, and challenges—one large organization had a system dedicated specifically to financial reporting as it related to individual collaborations.

Outside of software, one interlocutor extolled his formal communications plan, which comes particularly handy when you are dealing with globally dispersed teams. For others, good old-fashioned quarterly reports and meetings sufficed for keeping all parties in lockstep.

Oddly enough, the RACI matrix proved to be somewhat polarizing. Where Roye used it to revitalize a fledgling partnership by illuminating the appropriate times to bring in sales, marketing, and finance, the other groups found them to be cumbersome and useful for smaller organizations, at best.

Although many such tools have their uses, none of them may be optimal when a major issue unfolds quickly. In these instances, a good cup of java may work best.

“Go to the cafeteria and get coffee and discuss the problem,” urged one attendee.

ASAP isn’t done with this topic, either. If you need more help with this task that takes up more than two-thirds of your week, sign up for our interactive master class being facilitated by Jessica Wadd and Jonathan Hughes of Vantage Partners on Nov. 9 and 10. 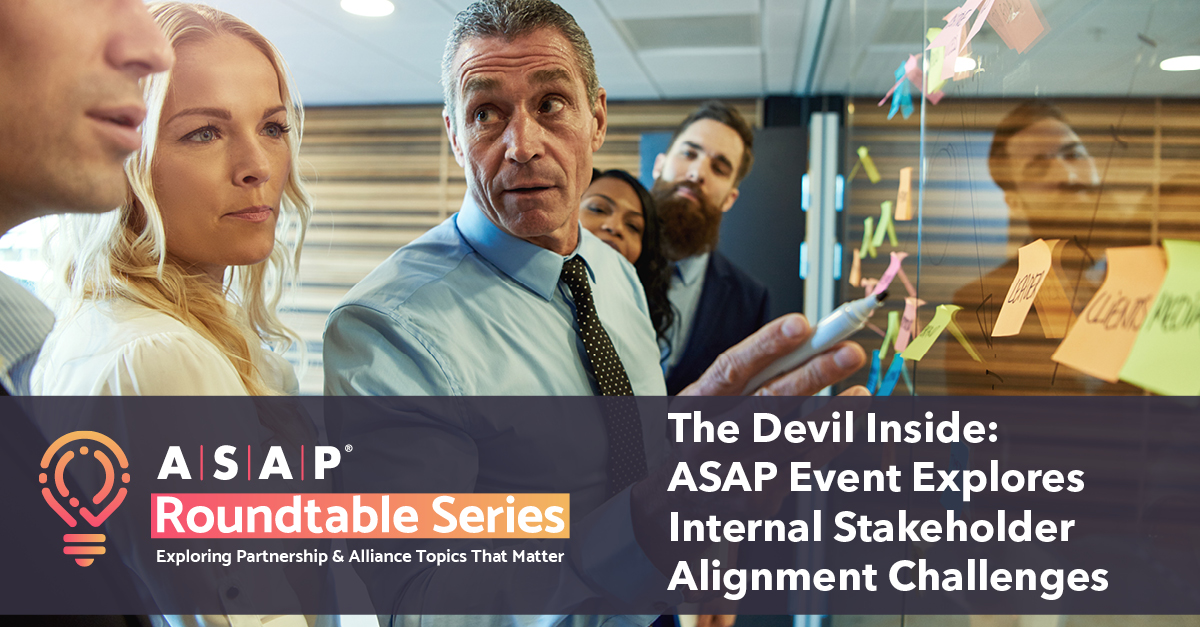