The Right Stuff for M&A? Alliance Managers Have It!

Unless a merger or acquisition has already rocked their world or they’re actively spearheading an integration, alliance managers might reasonably wonder what they have to do with M&A activity and why they should worry about it—or give it any thought at all. There are several good answers, which we’ll get to below, but maybe the biggest, overarching one is simply that there’s so much M&A activity going on right now, affecting multiple industries, and by all signs on the horizon there’s more to come. Not to care about it would be like sticking one’s head in the sand.

M&A is sexy to some, frightening to others, and fairly mysterious to all of us who aren’t intimately familiar with its arcane processes. But as two recent ASAP Webinar presenters advised, “Don’t give up hope!” That was one of the messages put forth by Nick Palmer, partner and managing director for North America at BTD, and Josh McGowan, senior consultant at BTD, in their July webinar presentation, “Do Alliance Managers Have the Right Stuff to Succeed at M&A?”

Spoiler alert: The answer is yes! In fact, as Palmer noted, the sharp differences between M&A and alliance management ironically contribute to alliance professionals’ potential competency in this realm.

“An M&A is an event,” he said. “An alliance is a process.” And as with many processes that require care and feeding, shepherding and guiding forward, when it comes to integrating acquired alliances, alliance managers truly have what it takes.

Or at least they have the potential for it. Yet when an M&A event is announced that affects their company, the first thing many people feel is cold-sweat fear.

“People are worried, they don’t know what’s going on, and they don’t think they’ll have time to [deal with] it,” said Palmer, citing the three most common responses many people have on hearing of an up-close M&A event.

McGowan backed up that finding with his own experience working on a merger over the course of four months and dealing with the continuing uncertainties employees were experiencing as the process unfolded.

"People have lost utility productivity,” he said. “They want to know, ‘What does this mean for me? Am I going to lose my job?’ We’re seeing it all day.”

And well-meaning communications people sometimes don’t help the situation. When asked about job losses, they may respond at first by saying that no one will lose their job, which sounds reassuring. As things rapidly evolve, however, that may turn out not to be true.

Meanwhile other factors can come into play, causing general confusion, according to Palmer.

“The rumor mill starts: ‘Mary got laid off!’” he said. “Even if Mary was planning on leaving anyway. Because the first people to leave are your best people—they have the most options.”

Indeed, the first wave of attrition is generally comprised of those who feel that they have other, better choices, while the next group may be those who are nearing retirement and/or are the beneficiaries of some kind of severance package that allows them to say goodbye and head out the door. The ongoing exodus may leave those who remain in a state of continuing fear and uncertainty—especially given that it can easily take a year from the announcement of a merger or acquisition to the closing date.

In any case, once an M&A activity is under way, it quickly goes from “event” to “process”—which is where alliance managers come in. Someone needs to lead the charge on the integration of acquired alliances, and whether that person is an alliance manager or not, some kind of “integration manager” must manage all the complexity, said Palmer.

“There’s a lot of moving pieces,” he acknowledged.

M&A for Fun and Profit

Laying out that process involves designing an operating model, a financial model, and a structure for integration governance and performance management, according to Palmer. It also means thinking about how to “start with the end in mind,” he said, and employing a version of the scientific method to come up with assumptions, test hypotheses, and get to the bottom of such issues as the sources of value expected to come from the newly acquired alliances, the consequences of any delays in the integration process, the implications of merging sales forces, etc.

So it turns out there are good reasons for alliance managers to care about M&A, and benefits to their getting involved in the M&A process. These include:

And besides, Palmer said, “It can be fun!”

So keeping one’s eyes on the prize might just mitigate what he admitted can be “a tedious, yet critical process,” turning the fear and loathing into fun and games—or at least something more constructive and rewarding for both alliance professionals and the organizations they serve. 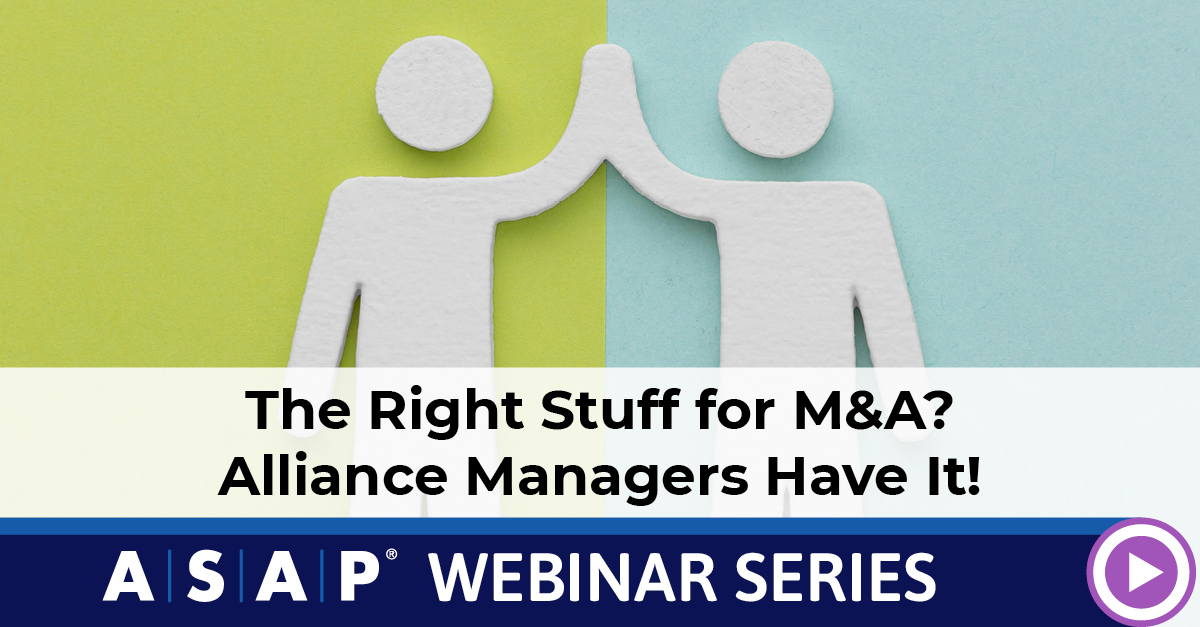