As arguably the two most alliance-centric industries in the business world, tech and pharma get a lot of ink due to their differences, namely their disparate timelines, regulatory climates, and sometimes even metrics. But ASAP’s latest webinar, “Tech and Pharma Partnering: Chocolate and Vanilla? or Fudge Swirl?,” reminded us that there are three common ingredients in concocting that sweet taste of alliance success in either of these verticals: 1) strategic thinking, 2) trust, and 3) conflict resolution.

Roll the Tape: Alliance Translators Have Everyone Viewing the Same Movie

If collaborations are indeed ice cream, a strategic mindset might be the cream, the milk, and the sugar.

“Everything we do truly in a strategic alliance has to start and end with strategy. If we don’t know where we’re going, how do we know when we’ve gotten there?”

Those were the words of Christina Neary, corporate vice president for the global Microsoft alliance at Avanade, a company that was formed as a joint venture between Accenture and Microsoft—“a child of celebrity parents,” quipped Neary.Neary noted that executives from the other divisions in each partner company tend to have only a rough idea of why organizations signed a partnership agreement and what they want the collaboration to achieve. It’s up to alliance managers to have a deeper knowledge of the drivers of partner initiatives and relate them to daily affairs—in other words, to be the “translator ring” that “helps facilitate that common understanding of what we’re doing together, and what it looks like to roll out that strategic North Star. It’s obviously a rolling strategy, but you have to build back from that North Star into what we are doing today.”

Neary even leads every presentation and meeting with a slide that conveys the priorities of both companies and the partnership’s main vision.

“That gets everyone looking at the same movie,” she said.

Plan to Stay Two Steps Ahead

Alison Handley, vice president and head of strategy and operations for Takeda’s Center for External Innovation, explained that in pharma the lengthy process of putting together a research and work plan actually gives alliance managers a holistic view of everyone’s contributions, roles, and expectations. It also illuminates the murkiest, most troublesome parts of the initial negotiations and the potential land mines to be cognizant of over time.

“There’s usually a strong alignment by the time you get to the end of that [plan construction]. The alliance manager is part of that whole process. They understand both parties’ interests and how it evolves in terms of the work plan and maybe what was given up, if you will, along the way. It forecasts the things to watch out for as the partnership kicks off,” said Handley.

And although pharma is known for its decade-long timeframes, Handley made sure listeners understood that alliance managers must apply a near-term perspective as much as a long-term one; they must have an eye toward milestones and other developments that could impact the alliance’s broader objectives, such as changes in the science or in personnel. Neary agreed; tech alliance managers are “always scanning the horizon” to “stay two phases ahead,” and therefore must constantly revisit assumptions, dependencies, and risks.

When it comes to trust, Handley reiterated the main theme from ASAP’s recent webinar on the subject: you’re less likely to get good results without it, and if you’re lucky enough to defy the odds, it will still be a chaotic exercise. Trust is the hot fudge coating every inch of smooth-running alliances, but for Handley, building trust really comes down to being transparent in communicating your people’s and company’s interests, values, and ways of working. Trust is easier to build when the partners know what they are “each going to bring to the table, so that both sides have a clear stake in the partnership,” she explained. “There’s no ambiguity about the goals and the contractual obligations and how you are going to get to the goals.”

Responding to a question about whether trust is harder to build in alliances between big and small pharma companies, Handley said the biggest challenge is getting those smaller entities to share information.

“We’re not a set-it-and-forget-it partnering organization. It’s fully collaborative for the entire time. We believe we have a lot to offer a small partner and we have a lot to gain, but if there isn’t a transparency that allows that kind of fluid collaboration and sharing to happen, it will be super painful and draining, and not productive. We try to walk away from those types of partners. We might be missing something, in terms of an amazing technology, but it’s not the right time if it’s starting out [like that],” she said.

“It Might as Well Be Me in the Room”

Neary also views trust as a sum of several subcomponents. At various times, she threw out words like “rapport,” “credibility,” “compassion,” “intimacy,” “reliability,” and “consistency” as necessary elements—the latter two are “the least sexy but most important,” in her estimation.

“Are we behaving like we agreed? Are there no surprises?” she said. “Is your word your bond? Do you deliver—do you say what you’ll do and then do it?”

Neary reminded the audience that advocating for your partner internally—and your partner responding in kind—is critical to building trust. She said her deepest professional relationships have been with alliance managers who represented her company’s interests so well that “it might as well be me in the room.”

Even the least turbulent collaborations will hit bumps in the road. Conflict is inevitable; how you work through it reflects the health of a partnership. Neary viewed it as a red flag if her alliance counterpart aspired to have a conflict-free relationship.

“To me, that’s dysfunctional,” she said. “It’s more about how we handle an issue than the fact there is an issue.”

While almonds and peanuts might taste good on a sundae, a few nuts just might ruin an alliance if not handled with care. Neary and Handley both stressed the need to assume the good intent at all times and called for compassion and empathy. A person’s beef might be motivated by something completely rational—Neary gave the example of salespeople depending on commissions.

What’s the best way to handle disputes in biopharma and tech? Both Neary and Handley espoused utilizing a formal process for hearing stakeholder grievances. Yes, it provides much-needed structure to the resolution process, but its greater contribution might be the intangible effects it has on the working relationship. Its mere presence gives people peace of mind that their voice will ultimately be heard if they can’t come to an agreement, and this relaxed state actually contributes to resolutions being reached at lower levels—it’s almost a form of reverse psychology.

In a previous alliance, Neary erected an escalation process that skyrocketed negotiations to the partner organizations’ most senior executives in a mere five days. Things always got fixed before they could get to the top.

“It’s a sign of a partnership that’s working and trying to solve things and figure things out,” she said.

“It’s most reassuring if you have that pulse on what’s happening and you have that relationship, you’re able to work a lot of magic on the level of the alliance managers and teams,” said Handley. She added that those first two components discussed earlier in the webinar, plus the partnership’s main objective, also serve as fire extinguishers.

“If you have clear strategy and trust, hopefully most of these things are issues that are coming up and getting handled at the alliance manager or team level,” said Handley. “Having a clear North Star and goal, and removing as much ambiguity as possible around what everyone is trying to achieve ends up eliminating any potential for real conflict because the North Star is shining bright.” 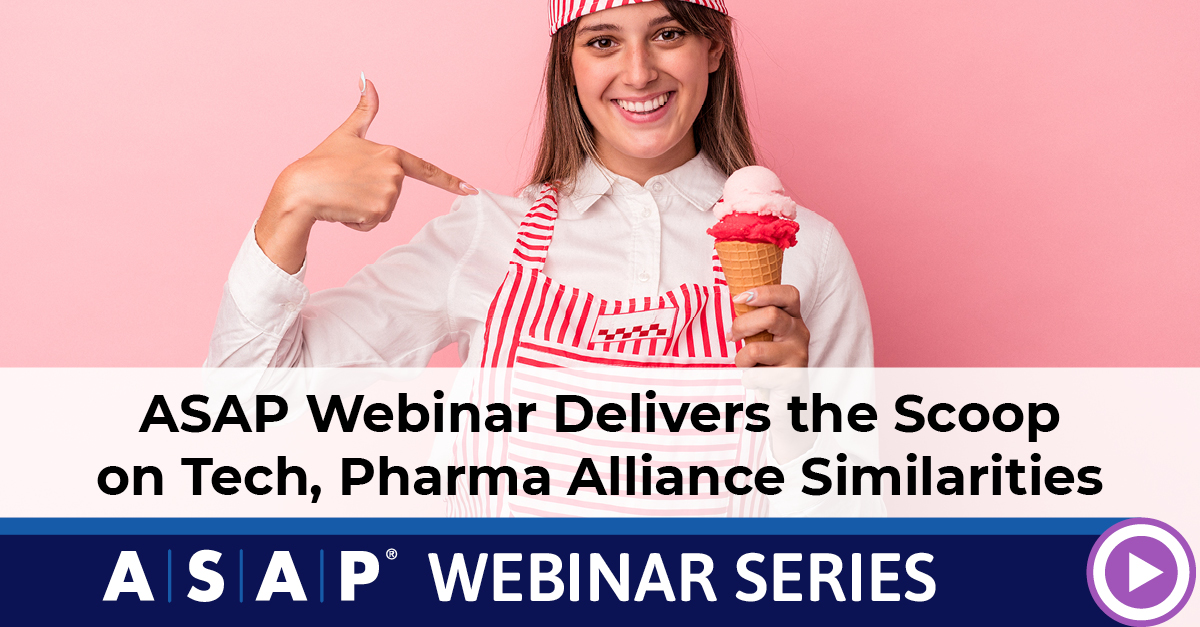