The world of biopharma partnering, as we know, is getting more complex, more diverse, and simply larger by the day. New deals, new deal structures, new alliances—more and more of them, some involving multiple partners—not to mention digital health alliances, pharma-tech collaborations, the list goes on and on.

How do alliance managers cope? And what happens when they’re not only communicating among and balancing competing or at least divergent interests, internally and externally, but in many cases now being tasked with overseeing the process of alliance integration after M&A activity, and even increasingly with “dis-integration,” transition to alliance wind-down, and the like?

All of these subjects and more were discussed in great and even passionate detail as the 2022 ASAP BioPharma Conference kicked off today with the invitation-only Leadership Forum. A group of more than 30 biopharma alliance leaders heard a presentation titled “Driving Value and Avoiding the Pitfalls in Biopharma Partnerships” given by George Xixis, JD, associate vice chancellor at UMass Chan Medical School. Xixis has 30 years in the industry, including a stint at Abbvie.

Following Xixis’s talk and Q&A, participants engaged in a lengthy and lively large-group discussion of where biopharma partnering, alliance management, and integration management are now, and where they might be going.

First, though, Xixis noted that “Nobody goes to school to be an alliance manager. It’s something people fall into for all kinds of reasons.”

And whereas alliances are often spoken of in somewhat fond terms for their unifying and collaborative qualities, Xixis maintained that the reality is sometimes less about togetherness and more about term sheets and tense conversations—or as he said, they can end up looking like “a bad arranged marriage.”

Xixis mentioned the wildly divergent, even conflicting interests, desires, timelines, and processes involving big pharma, small biotechs, and academia. So how to manage relationships between any two of these, plus inform and influence internal stakeholders, while driving value from an alliance? And do all of that largely without authority and often without much in the way of tangible power.

Yep, that’s the role of the alliance professional, which Xixis variously described as “generally magic,” as well as “the person who makes things happen.”

“The alliance manager’s role, simply stated, is to herd cats, often with great efficiency and style,” he summarized.

So how best to do that, among all these competing interests? Xixis’s answer: hypertransparency.

I’m Looking Through You

While more or less controversial to some in the audience—on the one hand some felt that this was essentially Alliance Management 101, while others applauded the notion but remarked on its limitations—Xixis’s concept of hypertransparency has several components as applied to alliance situations:

But how transparent can you be? Participants brought up the example of having an internal program that competes with the one the alliance is working on. Or having another alliance that competes. Or possibly having a different set of metrics for a project from those of the partner. Or seeing the goalposts move due to market changes or strategy shifts.

When you slice it and dice it, it may not be so clear cut.

But in the end, Xixis argued that the best alliance managers use their expertise, knowledge, and relationship networks to communicate on these issues and resolve disputes.

“Alliance management is like couples therapy,” he said. “The alliance manager’s role is to get the parties talking and figure out a path where some of those [different] needs, wants, and desires can be met. An approach of hypertransparency is, if not the approach, the preferred approach. I’m advocating for a shift in direction. I’ve seen it work better.”

In a world where, as participants agreed, information and credibility are currency, that might not be bad advice.

The Leadership Forum moved on after Xixis’s talk to more of a roundtable format, noting trends in alliance management in biopharma, as well as integration management—increasingly becoming the province of alliance managers.

Many such trends were surfaced, from growing alliance management groups by hiring, mentoring, and coaching more junior alliance managers to better use of information systems to document and measure alliance value creation and everything to do with partnerships, to the rise of the alliance operations manager role (or “knowledge concierge” as one participant termed it) to the delegation of alliance integration, termination, “dis-integration,” and asset return responsibilities to alliance managers, even in cases where the teams are kept separate within alliance management itself.

Even M&A reared its ugly head, as alliance managers could both learn from that dark realm and probably teach its practitioners a few things as well. Still, as one in the room quipped, alliance managers venturing into M&A, integration, or other new worlds may quickly find that they’re “not in Kansas anymore!”

Stay tuned to this space both this week as the BioPharma Conference continues and in the coming weeks for more news on the conference. 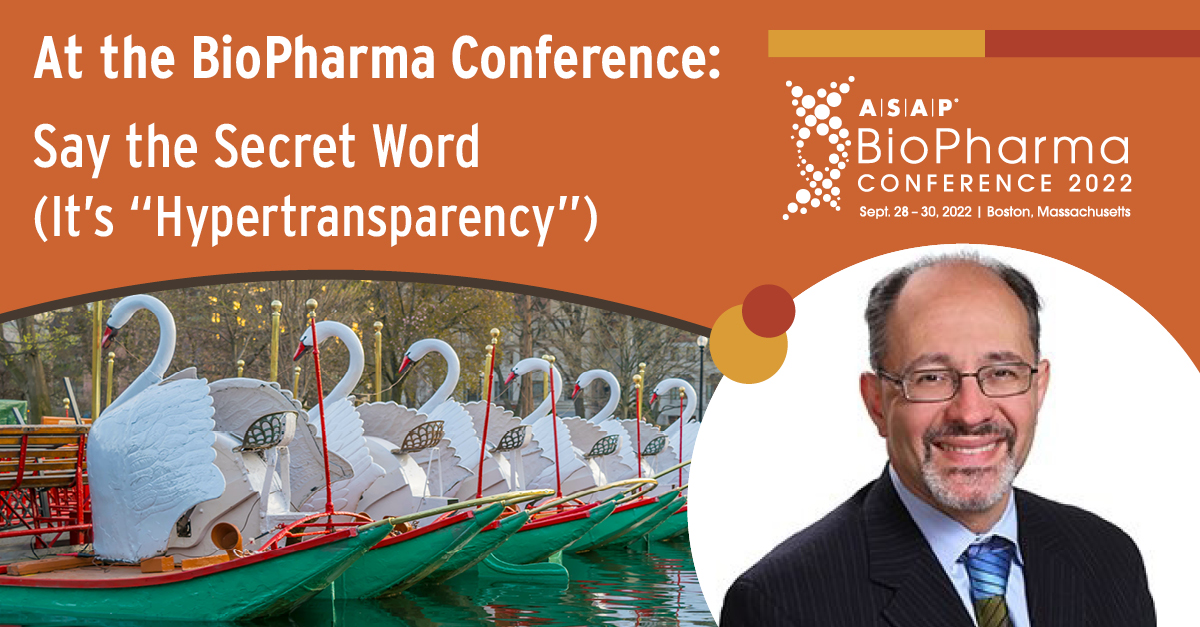 A Big Welcome to All!September 29, 2022 BioPharma Conference Speaker to Outline the Intangible Elements That Can Derail an AllianceSeptember 23, 2022