Why Partner? It’s About More Than Money

Especially in the hypercompetitive world of tech partnering, it would be easy to assume that it’s all about revenue. True, up to a point: but it turns out there are other important measures of value that should not be overlooked.

That’s according to Jim Griffin, senior vice president of global partnerships and strategy at the human capital management software vendor Beamery. Griffin shared his thoughts and insights on what makes a successful partnering program with an ASAP audience in a recent Collaborative Connection webinar titled “Beyond Revenue: Measuring the Full Value of Your Collaborations,” moderated by Greg Burge, principal at Collaborative Partnering Services.

Griffin responded to Burge’s question on what organizations get wrong and right about partnering by urging greater clarity on various elements of partnering activity, including starting with the customer’s desired outcomes and then “reverse engineering success,” as well as understanding the types of partnerships, channels, and sales motions needed to achieve those outcomes.

“It’s important to identify what type of business you’re in and the types of partnerships you need,” he said. “Honestly one of the biggest mistakes I see made is in the difference between partnering or alliances and a channel. Many organizations tend to [define] the terms channel and partner as almost the same thing. They’re very different. A channel is selling with and through others, reselling your product through a third party. An alliance is a collaborative cosell with a partnering organization, working in tandem for shared success. The sum of the parts should be greater than the whole.

“If you don’t do this properly and you comingle the terms, that quite frankly is channel conflict—the most disrupting thing you can do. The rule of thumb is, don’t create channel conflict. It seems easy, but you’d be surprised how many organizations do it.”

Scale Up for Partnering Wins

And revenue is important, no question. But Griffin said that it often amounts to a limited, short-term focus that may obscure other, equally important components of success.

“It’s not just revenue,” he explained. “That’s the favored outcome. Why do we create partnering organizations? It’s for revenue returns and for scale. Revenue is the most often focused on, but it’s often misplaced.”

The goal of any partnering program in this space should be to accelerate success for the sales team, yes—but also to create more and bigger opportunities down the road, and in the end to have happier customers, Griffin said. To get there, it’s important to partner in such a way that the partner wins, so you win too.

"My methodology has always been partner first,” Griffin said. “In the software space, when my partner wins, my company always wins—we’re the software, always coming along for the ride. When I focus on my partner’s success, we share and build a business plan. And I track that religiously, because when they’re successful, I’m always successful.”

Griffin noted that when he arrived at Beamery last year, he inherited a healthy partnering organization, but at the same time there were no true metrics to form the basis of what success would look like or how to report it. So he set a goal of impacting 30 percent of all net new revenue through partner attachments, in three ways: via reselling, coselling, and net new opportunities created—i.e., referrals. Griffin referred to these methods as “the three I’s: information, interaction, and introduction.”

"Thirty percent of every deal should fall into those buckets,” he said. “Everything comes in threes, whether you’re decorating or you’ve got a sales methodology.”

Outlining a number of partner program stages, he highlighted two as the most important: establish quick wins, and then “operate, incent, motivate, execute, and report.”

“Bigger deals, faster deals, trusted advisory access: This is why we partner,” he said. “The other purpose for partnering is scale. You have higher net promoter scores and better engagement of the client with trusted advisor status and domain expertise. Again, it’s reverse engineering success as clients use software.”

When Automation Clicks, It's Less Chaotic

A successful partnering program requires setting parameters, understanding what metrics are important to know, then automating the process. To do that, Griffin and his team at Beamery use a partner resource management (PRM) program called Vartopia, which can overlay onto a Salesforce CRM.

“It’s not just about having a partner portal, but automation of metrics tracking based on deal registration,” he explained. And with roughly 150 active opportunities at any one time, “It would be chaotic without a PRM.”

"When you do it right, you have shorter sales cycles, more reps achieving their quotas, higher lead conversion rates, better attainment of team quotas, and higher acceptance of marketing leads. We’ve had far greater outcomes than what some of the experts in the field said. [Our] top sales reps will have 85 percent of their deals with a partner attached. It almost seems effortless, but there’s a lot of sweat equity getting to this point.”

Griffin, who started his career in sales—“I think I was selected to go into partnerships because I had that gift of gab, the gladhanding capability that really was the precursor to the science of partnerships that we see today”—noted that while sales and partnering organizations must work together, there are big differences in the two approaches.

“With sales, whatever they can’t control, they try to kill,” he said. “When you’re in a partnering world, if you try to control your partner, you’re dead on arrival. It’s a collaborative engagement, and you don’t have partnerships unless you have trust. If you don’t have trust and transparency, you might as well not even bother.”

Griffin readily acknowledged that “you can have a successful partnership absolutely devoid of trust,” but added: “We all hate those! It takes three to four times the effort, and it can be exhausting. When you have the mutual respect and trust, you have a smoother operating motion.”

The work of partnering, as alliance professionals know, is both external and internal.

“You’ve got to make sure you bring everyone along,” Griffin said. “Understand the steps and rules of engagement, identify areas of opportunity and where you want to go together. It’s about knowing what your partner wants to have happen by partnering with you. The most important metric is: Is your client better off because you’re doing this together? If not, there’s something missing from the equation.” 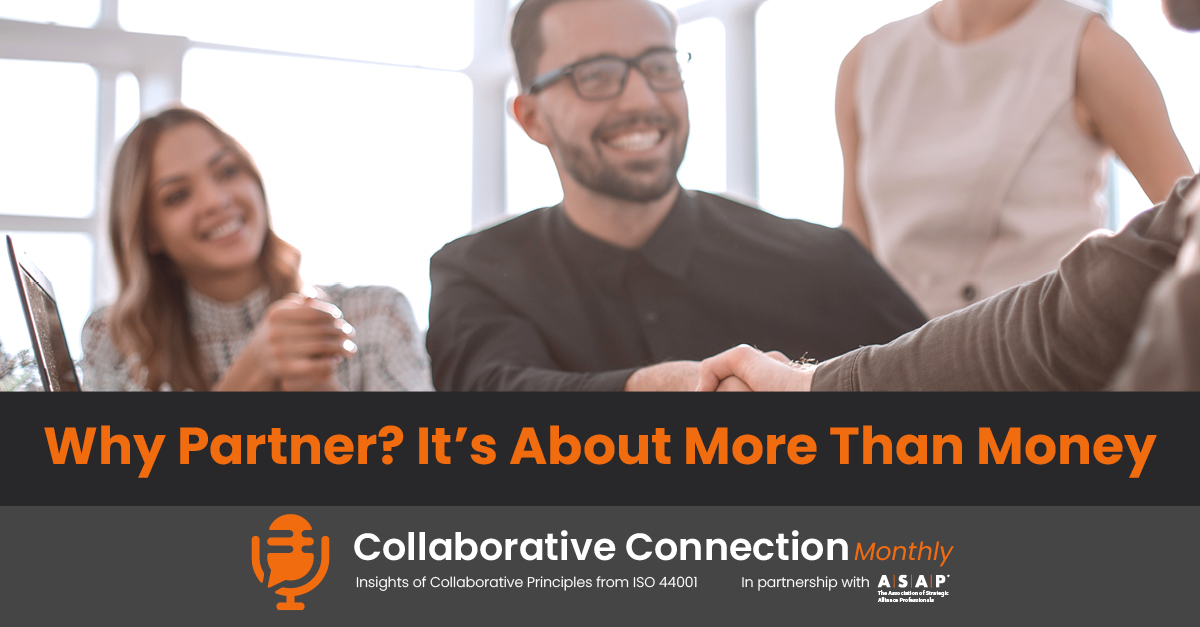